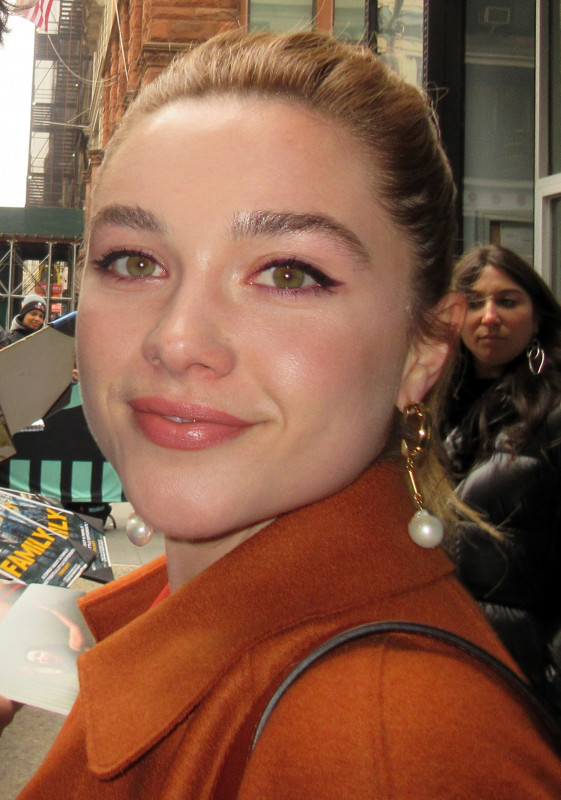 Pugh will next star alongside Scarlett Johansson in the Marvel Cinematic Universe film Black Widow, about the titular superhero, as another agent of the Black Widow program, Yelena Belova. She has also committed to team with Shia LaBeouf and Chris Pine in Don’t Worry Darling, a thriller set in 1950s California, which will be directed by Olivia Wilde.

Florence Pugh (/pjuː/ PEW; born 3 January 1996) is an English actress. She made her professional acting debut in the mystery film The Falling (2014) and gained recognition for her leading role as an unhappily married woman in the independent drama Lady Macbeth (2016). Her performance in the latter won her the BIFA Award for Best Actress. She also drew critical praise for her leading role in the miniseries The Little Drummer Girl (2018).

Pugh was born on 3 January 1996 in Oxford. Her father, Clinton Pugh, is a restaurateur in Oxford, while her mother, Deborah, is a dancer and dance teacher. Pugh has three siblings: actor and musician Toby Sebastian, actress Arabella Gibbins, and youngest sibling Rafaela "Raffie" Pugh.

Pugh made her American television debut in the television film Studio City, co-starring Eric McCormack, in 2015. The next year, she starred in the independent drama Lady Macbeth and had a recurring role as a webcam model in the first season of the ITV detective series Marcella. In the former, based on the novella Lady Macbeth of the Mtsensk District by Nikolai Leskov, she played a young girl unhappily married to a much older man. Reviewing the film for Variety, Guy Lodge called Pugh a "a major talent to watch" and praised her portrayal of her character's "complex, under-the-skin transformation". For her performance, she won the BIFA Award for Best Performance by an Actress in a British Independent Film, among others.

In 2018, Pugh appeared in the action film The Commuter and played Cordelia to Anthony Hopkins's Leir of Britain in Richard Eyre's television film King Lear. Later that year, she portrayed Elizabeth de Burgh in the Netflix historical film Outlaw King (2018), which also stars Chris Pine as Robert the Bruce. Charles Bramesco of The Guardian found her "excellent despite her thankless role". She next appeared in a six-part miniseries adaptation of John le Carré's spy novel The Little Drummer Girl, in which she played an actress in the 1970s who becomes embroiled in an espionage plot. In a mixed review of the series, Richard Lawson of Vanity Fair wrote, "Pugh is terrific throughout, once again asserting her star-on-the-rise status. She smartly mixes earthiness with sophistication, wisdom with naïveté." She also appeared alongside Emilia Clarke, Tom Hiddleston and Gemma Chan in the short film Leading Lady Parts in support of the Time'sUp movement.

Pugh was listed on Forbes' annual 30 Under 30 list, which recognises the 30 most influential people in Europe under the age of 30, in 2019. She was also recognised as having a breakthrough in the same year, during which she starred in three major films. She first starred as professional wrestler Paige in Fighting with My Family, a comedy-drama about Paige's relationship with her family, co-starring Lena Headey and Dwayne Johnson. The film premiered at the 2019 Sundance Film Festival to critical acclaim. Geoffrey Macnab of The Independent noted how different the role was from Pugh's previous appearances, and wrote that she was "completely convincing as the wrestler" and that she showed "the same defiance, scruffy glamour and self-deprecating humour as the real life [...] Paige." She next played the lead role in Ari Aster's horror film Midsommar, which chronicles a troubled couple who encounter Swedish cultists. David Edelstein of Vulture called her performance "amazingly vivid" and wrote, "Her face is so wide and open that she seems to have nowhere to hide her emotions."

Pugh's international breakthrough came in 2019, during which she garnered critical acclaim for her portrayals of wrestler Paige in the biographical sports film Fighting with My Family, an emotionally troubled woman in the horror film Midsommar, and Amy March in the coming-of-age period film Little Women. For the lattermost, she received Academy Award and BAFTA Award nominations.

Since April 2019, Pugh has been in a relationship with American actor Zach Braff. As of January 2020, she resides in Los Angeles.