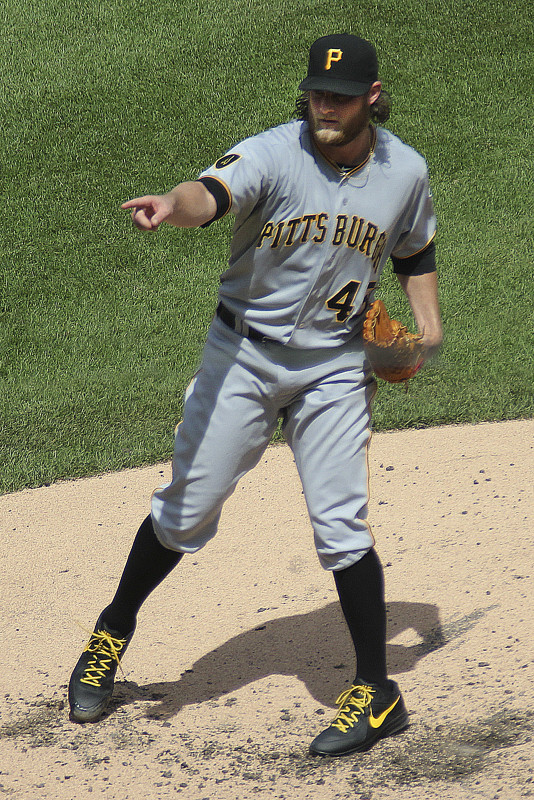 Due to injuries to James McDonald and Wandy Rodríguez, the Pirates promoted Cole to the major leagues, to make his MLB debut on June 11, 2013. During his debut, he struck out the first batter he faced, Gregor Blanco, on three pitches; the last one at 99 miles per hour (159 km/h). He also recorded his first career hit, a 2-run single with the bases loaded in his first career plate appearance. Cole pitched 6⅓ innings being charged with two earned runs but got the win as the Pirates won over the San Francisco Giants, 8–2. Cole became the fourth pitcher since 1920 to drive in 2+ runs and earn the win in his Major League debut. Cole is the first Pirate to start his career with wins in his first four starts since Nick Maddox in 1907. He was the fifth pitcher for any team to accomplish the feat in the past 40 years, joining Rich Gale of the 1978 Royals, Kaz Ishii of the 2002 Dodgers, Jered Weaver of the 2006 Angels and Scott Lewis of the 2008 Indians.

Gerrit Alan Cole (born September 8, 1990) is an American professional baseball pitcher for the New York Yankees of Major League Baseball (MLB). He previously played for the Pittsburgh Pirates and Houston Astros. Cole played for the baseball team at Orange Lutheran High School, and was selected by the Yankees in the first round of the 2008 MLB Draft. Cole opted not to sign, and instead attended the University of California, Los Angeles (UCLA), where he played college baseball for the UCLA Bruins.

On September 8, 2019, his 29th birthday, Cole became the second pitcher ever to strike out 14 or more hitters in three consecutive games. On September 18, 2019, Cole struck out his 300th batter of the season, becoming the third Astros pitcher to strike out 300 batters in a single season, after J. R. Richard and Mike Scott. Cole became the second-fastest pitcher to register 300 strikeouts in terms of innings pitched. His 198+1⁄3 innings trails only Randy Johnson, who achieved the feat in 197+2⁄3 innings in 2001. The following start, September 24, 2019, Cole struck out 14 batters to break the single-season strikeout record for any Astros pitcher, bringing his total to 316 on the year, and allowing only two singles in his appearance of seven scoreless innings. In his next start on September 29, 2019, Cole set an MLB record with his ninth consecutive outings with at least 10 strikeouts.

In 2008, USA Today named Cole to their All-USA high school baseball team. Baseball America rated him the 17th-best prospect available in the 2008 Major League Baseball draft. He was named the ESPN Rise Athlete of the Month for three consecutive months in March, April, and May 2010. He was named the starting pitcher of the 2008 Orange County North–South All-Star Game.

Heading into the 2011 MLB draft, Cole, Bauer, and Danny Hultzen, also a college pitcher, were seen as among the best available talents in the draft. The Pittsburgh Pirates selected Cole with the first overall selection. He signed a minor league contract with an $8 million signing bonus, the highest signing bonus ever offered to a rookie, 15 minutes before the signing deadline on August 15, 2011. Though he signed too late to pitch in the 2011 minor league season, he pitched for the Mesa Solar Sox of the Arizona Fall League (AFL). He recorded 16 strikeouts in 15 innings pitched for the Solar Sox and had a 3.00 earned run average (ERA) and a 0.93 walks plus hits per inning pitched ratio (WHIP). He was selected to start the AFL Rising Stars game in November 2011.

The Pirates invited Cole to spring training in 2012 as a non-roster invitee, but they optioned him to the minor leagues. Cole started the 2012 season with the Bradenton Marauders of the Class A-Advanced Florida State League, along with fellow starting pitcher Jameson Taillon, the Pirates' first selection in the 2010 MLB draft. Cole was named a FSL Mid-Season All-Star. He was promoted to the Altoona Curve of the Class AA Eastern League on June 15, 2012. He was named to appear in the 2012 All-Star Futures Game. In twelve starts with the Curve, Cole pitched to a 2.90 ERA, before the Pirates promoted him to the Indianapolis Indians of the Class AAA International League on August 29, 2012.

After his college baseball career, the Pirates made Cole the first overall selection in the 2011 MLB draft. Cole made his MLB debut in 2013, and was named the National League (NL) Rookie of the Month in September 2013. He was named the NL Pitcher of the Month for April 2015, and an MLB All-Star in 2015. The Pirates traded Cole to the Astros in the 2017–18 offseason. On September 18, 2019, Cole became the 18th pitcher in major league history to strike out at least 300 batters in a season. On December 16, 2019, Cole signed a $324 million contract with the Yankees, the largest contract in major league history for a pitcher.

Cole was voted the National League (NL) Rookie of the Month for September 2013. On the month, Cole had a 4–0 record and led all rookies with a 1.69 ERA and 39 strikeouts. Cole had a 10–7 record and a 3.22 ERA in 19 starts for Pittsburgh in 2013. Cole started Game Two of the 2013 National League Division Series, going six innings allowing two hits, one earned run, and five strikeouts, and ultimately defeating the St. Louis Cardinals. The Pirates chose Cole to start the deciding Game 5 over A. J. Burnett. The Cardinals won the game, and the series.

After focusing on his fastball during his rookie season, Cole entered 2014 spring training working on improving his curveball and slider. Cole has been a durable pitcher in 2014 pitching 75 1/3 innings, but manager Clint Hurdle acknowledged on June 7 that Cole would miss at least one start with shoulder fatigue. Cole was placed on the 15-day disabled list the next day, and activated on June 28.

Cole won the NL Pitcher of the Month Award for April 2015, after going 4–0 with a 1.76 ERA and 35 strikeouts in 30+2⁄3 innings pitched for the month. He was the Pirates' choice to start the 2015 National League Wild Card Game against the Chicago Cubs but took the loss after giving up four earned runs on six hits and a walk in five innings pitched.

The Pirates and Cole reached agreement in January 2018 on a one-year, $6.75 million contract.

On January 13, 2018, the Pirates traded Cole to the Houston Astros for Joe Musgrove, Michael Feliz, Colin Moran and Jason Martin.

Cole's performance since February 2018 and through the 2019 season was markedly different from his earlier seasons, due to intervention by the Astros management and coaching staff. Cole vastly reduced the number of two-seam fastballs he threw, threw more into the top of the strike zone, and suspiciously increased the spin rate of his fastball.

On April 29, 2018, Cole struck out 12 hitters in a game against the Oakland Athletics that resulted in a no-decision but an Astros win. In doing so, Cole broke the Astros strikeout record for April with 61 strikeouts in the first month. He finished his first month in an Astros uniform going 2–1 with 61 strikeouts and a 1.73 ERA in 41.2 innings pitched. On May 4, against the Arizona Diamondbacks Cole struck out 16, allowed only one hit, and pitched his first career shutout as the Astros won 8–0.

Cole attended the 2001 World Series, of which the Yankees took part. He held a sign that said "YANKEE FAN TODAY TOMORROW FOREVER", and a photograph shared by Newsday went viral in 2019 when news of his signing with the Yankees was reported. He brought the sign to his introductory press conference with the Yankees.

Cole is married to Amy Crawford, a former UCLA softball player and the sister of San Francisco Giants shortstop Brandon Crawford. They met when they attended UCLA. On January 1, 2020, Amy announced their first pregnancy. Their son, Caden Gerrit Cole, was born on June 30, 2020. They reside in Greenwich, Connecticut.

On July 23, 2020, Cole made his Yankees debut as an Opening Day starting pitcher throwing 5 innings against the Washington Nationals and allowing just one hit, a home run by Adam Eaton. Cole's regular-season winning streak reached 20, the third-longest in MLB history, but his streak ended on August 26, 2020, when he took a loss against the Atlanta Braves. He would lose three decisions in a row, but on September 11, 2020, Cole ended his 3-game losing streak by throwing a 2-hitter complete game shutout against the Baltimore Orioles. As it was a doubleheader, the game only went 7 innings. He ended his first season as a Yankee with a 7–3 record, throwing to a 2.84 ERA in 73 innings and striking out 94.

On September 29, 2020, in his Yankees playoff debut, during Game 1 of the wild card series against the Cleveland Indians, Cole struck out 13 batters without a walk, tying Tom Seaver (1973 NLCS Game 1) and second most in Yankees franchise history. He also became the first Major Leaguer in history to win three postseason games with 12 or more strikeouts. Only Roger Clemens (15 K's) has fanned more in a postseason start with the Yankees. In the 2020 ALDS against the Tampa Bay Rays, he was the winning pitcher in Game 1, and received a no-decision in the decisive game 5, which the Yankees would go on to lose.

On December 4, 2020, Cole was elected to the MLBPA's Executive Subcommittee.

On April 12, 2021, after recording 8 strikeouts and retiring 15 batters in a row in a game against the Toronto Blue Jays, Cole became the Yankees pitcher with the most strikeouts in the first three starts of the season of all-time, matching David Cone (1997) with 29.

On May 12, 2021, Cole notched his 1,500th career strikeout, becoming the second-fastest pitcher in history to reach the milestone behind Randy Johnson.