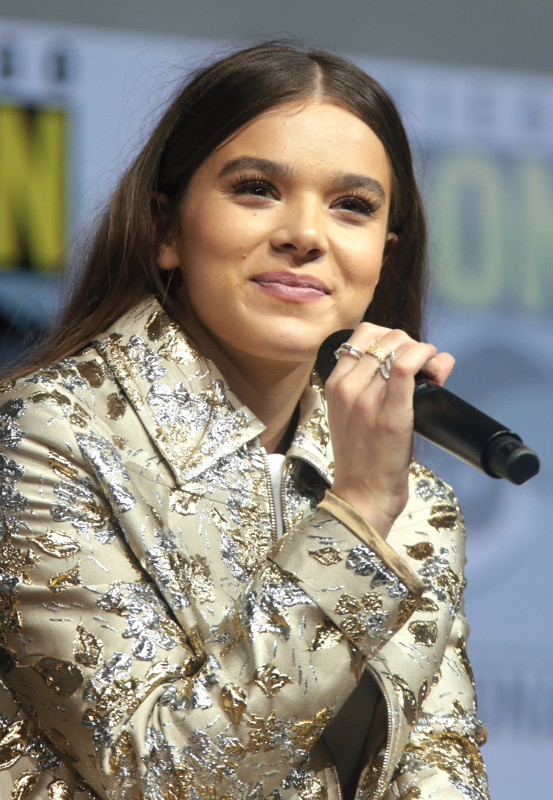 Hailee Steinfeld (born December 11, 1996) is an American actress, singer and model. She had her breakthrough with the western drama film True Grit (2010), which earned her nominations for the Academy Award, BAFTA Award and the SAG Award for Best Supporting Actress.

Among acting awards, Steinfeld has also won awards for her music. In 2017 she won a Billboard Music Award for Top Covered Artist for her song "Most Girls". Her 2015 single "Love Myself" debuted on the Billboard Pop Songs chart at number 27 (later peaking at 15), marking the highest debut for a solo female artist on the chart in 17 years, since Natalie Imbruglia's "Torn" in 1998. The song went on to certified two times platinum by the Recording Industry Association of America (RIAA). In 2020, "Most Girls" and Steinfeld's collaboration, with Grey and Zedd titled "Starving", was also certified two and four times platinum, respectively, by the RIAA.

Steinfeld began acting at the age of 10; she appeared in several short films, including playing the role of Talia Alden in the award-winning She's a Fox. Steinfeld was chosen for the role of Mattie Ross in True Grit when she was 13. The film was released internationally in December 2010; Richard Corliss of Time magazine called her performance one of the Top 10 Movie Performances of 2010 and wrote that Steinfeld "delivers the orotund dialogue as if it were the easiest vernacular, stares down bad guys, wins hearts. That's a true gift". Reviews from Roger Ebert, the Los Angeles Times, and Rolling Stone were also complimentary. The role earned Steinfeld a nomination at the 83rd Academy Awards for an Academy Award for Best Supporting Actress; it went to Melissa Leo. In May 2011, five months after True Grit was released, she was chosen to be the new face of Italian designer brand Miu Miu.

In 2011, Steinfeld was cast at age 14 to play Juliet in a 2013 adaptation of Romeo and Juliet. The role was originally intended for a 22-year-old actress; there was concern about nudity in the film, its director explained that when Steinfeld was cast, the script was changed to make it age-appropriate. The film was released in October 2013 to poor reviews in the United States and internationally. Steinfeld starred as Petra Arkanian in Ender's Game, a science-fiction action-adventure film based on the book by Orson Scott Card. The film was released on November 1, 2013.

Steinfeld played Violet, one of the leads in the romance-drama Begin Again. The film was given a limited release in the United States on June 27, 2014, grossing $134,064 on its opening weekend; it opened in wide release on July 11. It was re-released by The Weinstein Company on August 29. Paramount Pictures closed a deal in 2011 for the screen rights to the Cat Patrick novel Forgotten and announced that she would play London Lane in a project yet to be filmed as of 2015 . In 2014, Steinfeld was announced to star as Min Green in a screen adaptation of Daniel Handler's romantic-comedy book Why We Broke Up, but the film has not yet gone into production.

Steinfeld was cast as Eliza opposite Ender's Game co-star Asa Butterfield in the film adaptation of Ten Thousand Saints, which premiered on January 23, 2015, at the 2015 Sundance Film Festival. Steinfeld was originally cast to play the female lead in the 2015 film, For the Dogs, but was replaced by actress Emma Roberts. In spring 2014, Steinfeld narrated as the voice of Anne Frank for an exhibition on Frank at the Museum of Tolerance. In October, she was cast to star as Hadley in The Statistical Probability of Love at First Sight, based on the novel of the same name by Jennifer E. Smith. Steinfeld was announced in January 2015 as the star of the film adaptation of Carrie Pilby, the young adult novel by Caren Lissner. In March, Steinfeld was one of the voice actors for the English-language dub of the Japanese animated film When Marnie Was There. Steinfeld plays Anna Sasaki alongside Kiernan Shipka as Marnie. In April 2015, Steinfeld was cast in a lead role in Break My Heart 1000 Times, based on the YA novel by Daniel Waters. Scott Speer is set to direct.

Steinfeld starred as the Trinity in the music video for "Bad Blood" by Taylor Swift featuring Kendrick Lamar. The video premiered at the 2015 Billboard Music Awards ceremony on May 17, 2015, and won a MTV Video Music Award for Video of the Year. Steinfeld starred in limited release movie Barely Lethal. The movie was directed by Kyle Newman and was released on May 29, 2015. Steinfeld co-starred in Pitch Perfect 2, alongside Anna Kendrick, Rebel Wilson, and Elizabeth Banks, who also directed. She played some of her songs for a representative from Republic Records at an event in New York City, and the label signed her. In May, Republic Records announced the record deal and that Steinfeld was working on her first release.

Steinfeld's father is Jewish and her mother is Christian. Her maternal grandfather, Ricardo Domasin, was of half Filipino (from Panglao, Bohol) and half African-American descent. Steinfeld was raised in Agoura Hills and later in Thousand Oaks, California, attending Ascension Lutheran School, Conejo Elementary, and Colina Middle School. She was home-schooled from 2008 until her high school graduation in June 2015.

In July 2015, Steinfeld and singer Shawn Mendes released an acoustic version of Mendes' single, "Stitches". The following month, Steinfeld released her debut single, "Love Myself", with Republic Records. The song garnered media attention for its empowering message as well as suggestive lyrics that led media outlets to dub the song an "ode to masturbation". Steinfeld's debut extended play, Haiz (the nickname used by her fans), was released in November 2015. Haiz was produced by Mattman & Robin and features co-writers Julia Michaels and Justin Tranter. The EP was released to mixed reviews from PopDust, Vulture and Nylon. In February 2016, Steinfeld released a new version of "Rock Bottom" (replacing the original version) as the second single featuring American funk pop band DNCE. Her second verse and a line in the bridge was sung by lead singer, Joe Jonas as well as the second pre-chorus and rest of the choruses after that. Performing alongside Steinfeld and Jonas were the other DNCE members, with JinJoo Lee on guitar, Cole Whittle on bass guitar, and Jack Lawless on drums. Her single "Starving" was released in July 2016. The song is a collaboration with Grey featuring Zedd and became her biggest hit to date going platinum in Italy, New Zealand, Sweden, United Kingdom and the United States while also going double platinum in Australia and triple platinum in Canada.

Steinfeld has made several public appearances during charity events, such as the Breast Cancer Foundation's 2014 Hot Pink Party, the iHeartRadio Jingle Ball 2015 tour, and WE Day 2019 in California. In 2016, Steinfeld participated in singing "Santa Claus Is Coming to Town" with fellow singers and celebrities. The single raised money to aid New York City's homeless during the holiday season through "Robin Hood", a New York City organization that focuses on fighting poverty.

Steinfeld played the lead role in The Edge of Seventeen, a coming-of-age comedy co-starring Blake Jenner, Woody Harrelson and Kyra Sedgwick, and written and directed by Kelly Fremon Craig. The film was released on November 18, 2016, to positive reviews, and Steinfeld's performance was praised by critics and earned a Golden Globe Award nomination. She started dating Instagram star Cameron Smoller in 2016. They made their public debut as a couple at a Golden Globes party in early 2017 but broke up in November 2017.

In April 2017, Steinfeld released her next single "Most Girls", which peaked at number 58 on the Billboard Hot 100 chart in the United States. In September 2017, Steinfeld released the single "Let Me Go", a collaboration with Swedish record producer Alesso featuring backup vocals from Florida Georgia Line and Republic Records songwriter Andrew Watt, which reached number 14 on the Mainstream Top 40 chart. Steinfeld reprised her role as Emily Junk in Pitch Perfect 3 (2017). Steinfeld started dating Irish singer Niall Horan in December 2017. The two broke up after a year in December 2018.

On January 12, 2018, Steinfeld released "Capital Letters" for the soundtrack to the film Fifty Shades Freed. In March 2018, Steinfeld revealed that she is "wrapping up" work on her debut studio album. She performed at Indonesian Choice Awards in Jakarta, Indonesia the next month. Steinfeld then featured the song "Colour" with MNEK on June 1. In September 2018, she was featured on Logic's album YSIV, on the song "Ordinary Day." She hosted and performed at 2018 MTV Europe Music Awards in Bilbao, Spain in November 2018. In late 2018, Steinfeld starred in the Transformers spin-off film Bumblebee, and provided the voice of Gwen Stacy/Spider-Woman in the Academy Award-winning animated film Spider-Man: Into the Spider-Verse. On November 2 of the year, her song "Back to Life" was released as a single from the Bumblebee soundtrack. In January 2019, she featured on the remix of "Woke Up Late" by Drax Project.

In August 2019, Hailee was featured on the music video for Benny Blanco and Juice Wrld's single "Graduation", along with various actors and singers, including Justice Smith, Dove Cameron, Tony Revolori, Peyton List and Lil Dicky. She appeared in a cameo as one of the recruited Angels in the 2019 film Charlie's Angels. Steinfeld was cast to star as Emily Dickinson in the Apple TV+ period comedy series Dickinson, which aired on November 1, 2019.

Steinfeld has released two singles in 2020, "Wrong Direction" and "I Love You's". The tracks act as the first and second singles, respectively, from her EP Half Written Story, which was released on May 8, 2020. The EP serves as the first part of a two-part project, with the second part to be released in the summer of 2020. In December 2020, Steinfeld was cast as Kate Bishop / Hawkeye in the Disney+ Marvel Cinematic Universe series Hawkeye.

Steinfeld gained recognition in music after performing "Flashlight" in Pitch Perfect 2 (2015). She signed with Republic Records soon after and released her debut single, "Love Myself", followed by her debut extended play Haiz (2015). She went on to release a series of singles, including the collaboration "Starving", which peaked at number 12 on the Billboard Hot 100 chart, and "Let Me Go" with Alesso, Florida Georgia Line and Watt, which peaked at number two on the US Dance songs chart. In May 2020, she released her second extended play, Half Written Story, supported by the singles "Wrong Direction" and "I Love You's".

Steinfeld alongside the cast of the Pitch Perfect film series reunited to record an a cappella cover of Beyonce's track "Love On Top", which was released in August 2020. The proceeds from the song went to Unicef to help children in Lebanon and around the world.