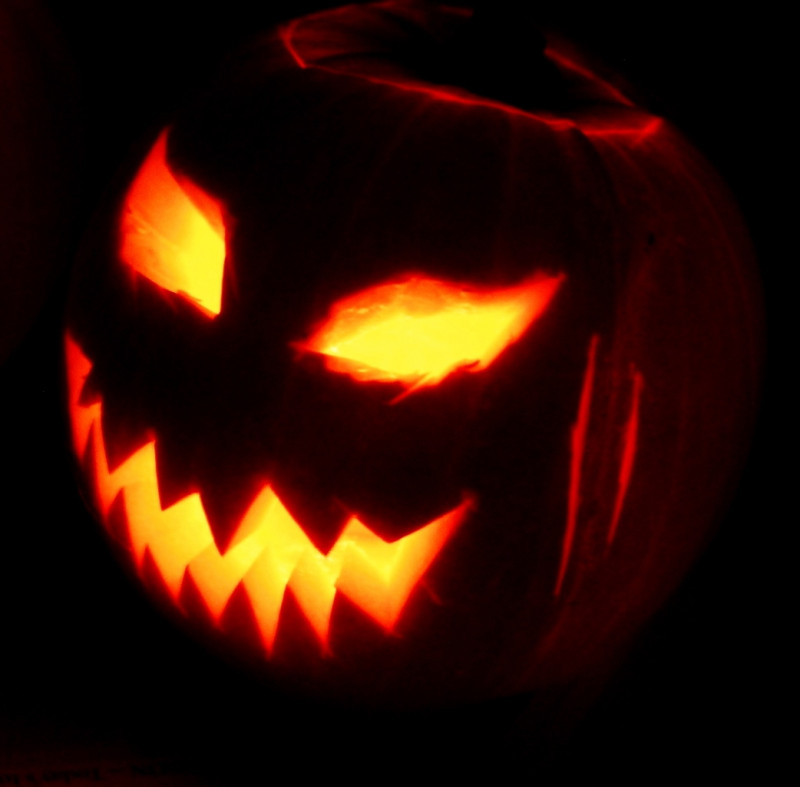 The modern imagery of Halloween comes from many sources, including Christian eschatology, national customs, works of Gothic and horror literature (such as the novels Frankenstein; or, The Modern Prometheus and Dracula) and classic horror films such as Frankenstein (1931) and The Mummy (1932). Imagery of the skull, a reference to Golgotha in the Christian tradition, serves as "a reminder of death and the transitory quality of human life" and is consequently found in memento mori and vanitas compositions; skulls have therefore been commonplace in Halloween, which touches on this theme. Traditionally, the back walls of churches are "decorated with a depiction of the Last Judgment, complete with graves opening and the dead rising, with a heaven filled with angels and a hell filled with devils", a motif that has permeated the observance of this triduum. One of the earliest works on the subject of Halloween is from Scottish poet John Mayne, who, in 1780, made note of pranks at Halloween; "What fearfu' pranks ensue!", as well as the supernatural associated with the night, "Bogies" (ghosts), influencing Robert Burns' "Halloween" (1785). Elements of the autumn season, such as pumpkins, corn husks, and scarecrows, are also prevalent. Homes are often decorated with these types of symbols around Halloween. Halloween imagery includes themes of death, evil, and mythical monsters. Black cats, which have been long associated with witches, are also a common symbol of Halloween. Black, orange, and sometimes purple are Halloween's traditional colors.

In parts of Italy until the 15th century, families left a meal out for the ghosts of relatives, before leaving for church services. In 19th-century Italy, churches staged "theatrical re-enactments of scenes from the lives of the saints" on All Hallow's Day, with "participants represented by realistic wax figures". In 1823, the graveyard of Holy Spirit Hospital in Rome presented a scene in which bodies of those who recently died were arrayed around a wax statue of an angel who pointed upward towards heaven. In the same country, "parish priests went house-to-house, asking for small gifts of food which they shared among themselves throughout that night". In Spain, they continue to bake special pastries called "bones of the holy" (Spanish: Huesos de Santo) and set them on graves. At cemeteries in Spain and France, as well as in Latin America, priests lead Christian processions and services during Allhallowtide, after which people keep an all night vigil. In 19th-century San Sebastián, there was a procession to the city cemetery at Allhallowtide, an event that drew beggars who "appeal[ed] to the tender recollectons of one's deceased relations and friends" for sympathy.

In Ireland and Scotland, the turnip has traditionally been carved during Halloween, but immigrants to North America used the native pumpkin, which is both much softer and much larger, making it easier to carve than a turnip. The American tradition of carving pumpkins is recorded in 1837 and was originally associated with harvest time in general, not becoming specifically associated with Halloween until the mid-to-late 19th century.

In Scotland and Ireland, guising – children disguised in costume going from door to door for food or coins – is a traditional Halloween custom. It is recorded in Scotland at Halloween in 1895 where masqueraders in disguise carrying lanterns made out of scooped out turnips, visit homes to be rewarded with cakes, fruit, and money. In Ireland, the most popular phrase for kids to shout (until the 2000s) was "Help the Halloween Party". The practice of guising at Halloween in North America was first recorded in 1911, where a newspaper in Kingston, Ontario, Canada, reported children going "guising" around the neighborhood.

While the first reference to "guising" in North America occurs in 1911, another reference to ritual begging on Halloween appears, place unknown, in 1915, with a third reference in Chicago in 1920. The earliest known use in print of the term "trick or treat" appears in 1927, in the Blackie Herald, of Alberta, Canada.

The first recorded purpose-built haunted attraction was the Orton and Spooner Ghost House, which opened in 1915 in Liphook, England. This attraction actually most closely resembles a carnival fun house, powered by steam. The House still exists, in the Hollycombe Steam Collection.

The thousands of Halloween postcards produced between the turn of the 20th century and the 1920s commonly show children but not trick-or-treating. Trick-or-treating does not seem to have become a widespread practice in North America until the 1930s, with the first US appearances of the term in 1934, and the first use in a national publication occurring in 1939.

"Trick-or-Treat for UNICEF" is a fundraising program to support UNICEF, a United Nations Programme that provides humanitarian aid to children in developing countries. Started as a local event in a Northeast Philadelphia neighborhood in 1950 and expanded nationally in 1952, the program involves the distribution of small boxes by schools (or in modern times, corporate sponsors like Hallmark, at their licensed stores) to trick-or-treaters, in which they can solicit small-change donations from the houses they visit. It is estimated that children have collected more than $118 million for UNICEF since its inception. In Canada, in 2006, UNICEF decided to discontinue their Halloween collection boxes, citing safety and administrative concerns; after consultation with schools, they instead redesigned the program.

The haunted house as an American cultural icon can be attributed to the opening of the Haunted Mansion in Disneyland on 12 August 1969. Knott's Berry Farm began hosting its own Halloween night attraction, Knott's Scary Farm, which opened in 1973. Evangelical Christians adopted a form of these attractions by opening one of the first "hell houses" in 1972.

The first Halloween haunted house run by a nonprofit organization was produced in 1970 by the Sycamore-Deer Park Jaycees in Clifton, Ohio. It was cosponsored by WSAI, an AM radio station broadcasting out of Cincinnati, Ohio. It was last produced in 1982. Other Jaycees followed suit with their own versions after the success of the Ohio house. The March of Dimes copyrighted a "Mini haunted house for the March of Dimes" in 1976 and began fundraising through their local chapters by conducting haunted houses soon after. Although they apparently quit supporting this type of event nationally sometime in the 1980s, some March of Dimes haunted houses have persisted until today.

The yearly New York's Village Halloween Parade was begun in 1974; it is the world's largest Halloween parade and America's only major nighttime parade, attracting more than 60,000 costumed participants, two million spectators, and a worldwide television audience.

On the evening of 11 May 1984, in Jackson Township, New Jersey, the Haunted Castle (Six Flags Great Adventure) caught fire. As a result of the fire, eight teenagers perished. The backlash to the tragedy was a tightening of regulations relating to safety, building codes and the frequency of inspections of attractions nationwide. The smaller venues, especially the nonprofit attractions, were unable to compete financially, and the better funded commercial enterprises filled the vacuum. Facilities that were once able to avoid regulation because they were considered to be temporary installations now had to adhere to the stricter codes required of permanent attractions.

In the late 1980s and early 1990s, theme parks entered the business seriously. Six Flags Fright Fest began in 1986 and Universal Studios Florida began Halloween Horror Nights in 1991. Knott's Scary Farm experienced a surge in attendance in the 1990s as a result of America's obsession with Halloween as a cultural event. Theme parks have played a major role in globalizing the holiday. Universal Studios Singapore and Universal Studios Japan both participate, while Disney now mounts Mickey's Not-So-Scary Halloween Party events at its parks in Paris, Hong Kong and Tokyo, as well as in the United States. The theme park haunts are by far the largest, both in scale and attendance.

According to a 2018 report from the National Retail Federation, 30 million Americans will spend an estimated $480 million on Halloween costumes for their pets in 2018. This is up from an estimated $200 million in 2010. The most popular costumes for pets are the pumpkin, followed by the hot dog, and the bumblebee in third place.