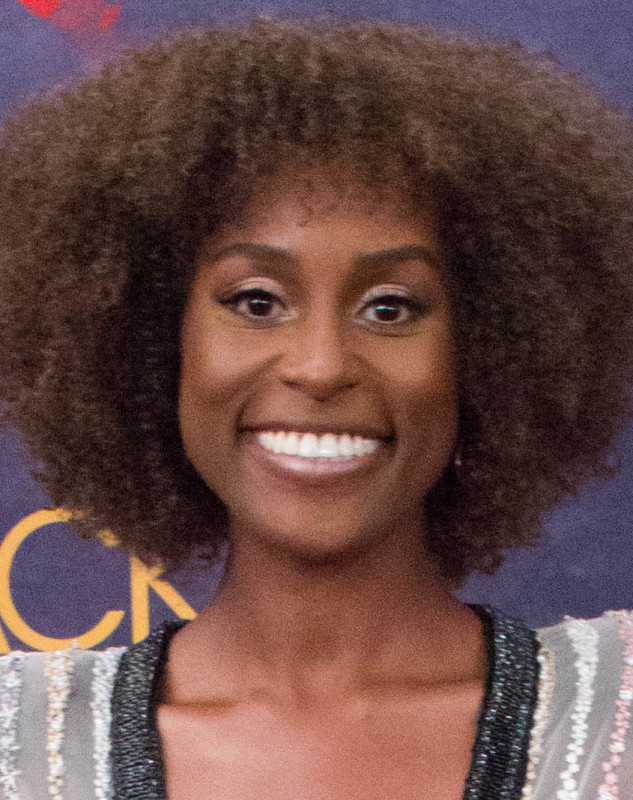 Jo-Issa Rae Diop (born January 12, 1985), credited professionally as Issa Rae, is an American actress, writer, and producer. Rae first garnered attention for her work on the YouTube web series Awkward Black Girl. Since 2011, Rae has continued to develop her YouTube channel, which features various short films, web series, and other content created by people of color.

In 2007, Diop graduated from Stanford University with a Bachelor of Arts in African and African-American Studies. As a college student, she made music videos, wrote and directed plays, and created a mock reality series called Dorm Diaries for fun. At Stanford, Diop met Tracy Oliver, who helped produce Awkward Black Girl and starred on the show as Nina.

After college, Diop received a theater fellowship at The Public Theater in New York City. Oliver and Diop started taking classes together at the New York Film Academy. Diop worked odd jobs and at one point was struggling to decide between business school and law school, but eventually abandoned both ideas when Awkward Black Girl started taking off in 2011.

Rae's web series Awkward Black Girl premiered on YouTube in 2011. The show follows the life of J (played by Rae) as she interacts with co-workers and love interests who place her in uncomfortable situations. The story is told through a first-person narrative as J usually reveals how she feels about her circumstances through voice-over or dream sequence.

The series eventually went viral through word of mouth, blog posts, and social media, resulting in mainstream media coverage and attention. In an effort to fund the rest of the first season, Rae and producer Tracy Oliver decided to raise money for the series through Kickstarter. On August 11, 2011 they were awarded $56,269 from 1,960 donations and released the rest of season one on Rae's YouTube channel.

In 2012, Rae was included on the annual Forbes '30 Under 30' list in the entertainment section.

In 2013, Rae began working on a comedy series pilot with Larry Wilmore, in which she would star. The series, about the awkward experiences of a contemporary African-American woman, was eventually titled Insecure. HBO picked up the pilot in early 2015 and it was subsequently greenlit. Since its release in 2016, the series has received critical acclaim; Eric Deggans of NPR wrote that "Rae has produced a series that feels revolutionary just by poking fun at the life of an average, twenty-something black woman."

Rae's first book, a memoir titled The Misadventures of Awkward Black Girl, was released in 2015 and became a New York Times best-seller. In the book, she chronicles her life through a series of humorous anecdotes and opens up about her personal struggle with not fitting in, and not being considered "black enough" at times.

In May 2015, Rae appeared on the cover of Essence magazine's Game Changers issue, alongside Shonda Rhimes, Ava DuVernay, Debbie Allen, and Mara Brock Akil. Rae expressed her desire for more people of color working in production behind the scenes to make a lasting impact in the television industry.

Rae has used her platform to bring attention to police violence and brutality against African-Americans. Following the police shooting of Alton Sterling in 2016, she raised $700,000 for the Sterling Family Trust to help pay for the Sterling children to attend college.

In 2017, the American Film Institute selected Insecure as one of the top 10 Television Programs of the Year. For her acting work on the show, Rae has received two Golden Globe Award nominations for Best Actress – Television Series Musical or Comedy in 2017 and 2018, as well as a Primetime Emmy Award nomination for Outstanding Lead Actress in a Comedy Series in 2018.

In 2018, at the 77th annual Peabody Awards, Insecure was honored for "creating a series that authentically captures the lives of everyday young, black people in modern society."

Rae has achieved wider recognition as the co-creator, co-writer, and star of the HBO television series Insecure (2016–present), for which she has been nominated for multiple Golden Globes Awards and Primetime Emmy Awards. Her 2015 memoir, titled The Misadventures of Awkward Black Girl, became a New York Times best-seller. In 2018, Rae was included in the annual Time 100 list of the most influential people in the world.

Rae married her longtime partner, Louis Diame, a Senegalese businessman, in a private ceremony in France in July 2021. Rae first wore her engagement ring publicly on the cover of Essence magazine's April 2019 issue.

On October 11, 2019, Google announced that Rae would be an additional voice to the Google Assistant. Users can make Google Assistant speak in Rae's voice by saying "Ok Google, talk like Issa."

Released in 2020, directed by Michael Showalter, Rae played the role of Leilani. The film starred Kumail Nanjani, who played Jibran, Leilani's boyfriend. Throughout the film, the couple struggles to maintain their relationship and during this, they face an eventful murder.

Released in 2020, follows the journey of Issa’s character, Mae Morton, and LaKeith Stanfield's character Michael Block, as the two search for the backstory of Mae’s mother. The New York Times mentioned this film as “an unabashedly old-school love story”. The Empire said that  “The Photograph is an African-American romance that, for the most part, feels relatable and true”.