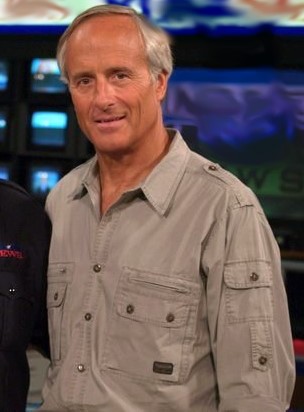 Jack Bushnell Hanna (born January 2, 1947) is a retired American zookeeper and a former director emeritus of the Columbus Zoo and Aquarium. “Jungle Jack” was director of the zoo from 1978 to 1992, and is viewed as largely responsible for elevating its quality and reputation. His media appearances, particularly with Johnny Carson, David Letterman, James Corden, Good Morning America, and Maury Povich have made him one of the most notable animal experts in the United States.

Hanna was born in Knoxville, Tennessee. He grew up on his father's farm and volunteered for the family veterinarian, Dr. Roberts, when he was 11. He attended The Kiski School, an all-boys boarding school in Saltsburg, Pennsylvania, for high school, graduating in 1965. He majored in business and political science at Muskingum College in New Concord, Ohio, where he got in trouble for keeping ducks in his dorm room and a donkey in a shed behind his fraternity house (The M.A.C.E. Club). In his senior year, Hanna married Suzi, a cheerleader at Muskingum, and graduated in 1968.

Although unable to secure zoning as a zoo for his father's farm, Hanna and Suzi opened a pet shop and petting zoo. In 1972, a three-year-old boy was mauled by a lion at Hanna's farm after the boy slipped past the protected barrier and stuck his arm through the enclosure fence, subsequently losing the arm. Hanna settled the subsequent lawsuit out of court, shut down the petting zoo, and moved his family to Florida.

He worked for a wildlife adventure company and directed the small Central Florida Zoo and Botanical Gardens from 1973 to 1975. When he was offered the position at the Columbus Zoo in 1978, one of the reasons he accepted was because he believed Columbus Children's Hospital had the best treatment available for his daughter Julie's leukemia. She recovered by the age of six, although she needed to have a brain tumor removed later in life. At the time he became the zoo's director, the grounds of the zoo were unkempt and the facilities run down. Hanna initially struck many as a "zealous" zoo director, often traveling around the zoo grounds after closing to personally pick up trash. He also realized the importance of increasing the profile of the Columbus Zoo in central Ohio to get more public support and funding, and the "everyman"-seeming Hanna proved to be very well-suited to public relations for the zoo. From 1981-83, Hanna hosted a local television program, "Hanna's Ark", which aired on the local CBS affiliate in Columbus, WBNS. Hanna's live animal demonstrations on Good Morning America and David Letterman's talk show incarnations brought national attention to the Columbus Zoo as well as to Hanna himself. Over the course of Hanna's tenure as director, the zoo made the transition from cage-like enclosures to habitat environments, and the grounds were significantly expanded. The annual attendance of the Columbus Zoo increased by over 400% during this time. Hanna was named Director Emeritus of the Columbus Zoo and Aquarium in 1992.

Hanna published his autobiography, Monkeys on the Interstate, in 1989. He has published many books for children as well. He has hosted the syndicated television shows Jack Hanna's Animal Adventures, Jack Hanna's Into the Wild, and Jack Hanna's Wild Countdown. Hanna also occasionally contributes commentary as an animal expert on various local and national news programs, and has done guest spots on other shows such as Larry King Live, Nancy Grace, Maury, and The Hollywood Squares. On September 25, 2003, Jack made a special guest appearance on an episode of Blue's Clues (season 5, episode 35, "Animals in Our House?"). He was also named one of the "50 Most Beautiful People" by People magazine in 1996. Hanna also appeared in Neal McCoy's 2005 music video for "Billy's Got His Beer Goggles On" with a hyacinth macaw, a sloth and an albino burmese python. Hanna, along with Emmy-award winning musician Mark Frye, released an album through Virgin Records in 1996 entitled Jack Hanna's World.

In May 2018 at the Los Angeles Zoo's annual Beastly Ball, Hanna received the Tom Mankiewicz Leadership Award for his work in conservation.

In June 2020, Hanna announced his retirement from the Columbus Zoo effective at the end of the year.

In April 2021, Hanna's family announced that he had been diagnosed with dementia, subsequently thought to be Alzheimer's disease, and would make no further public appearances. His daughters stated that "his condition has progressed much faster in the last few months than any of us could have anticipated".