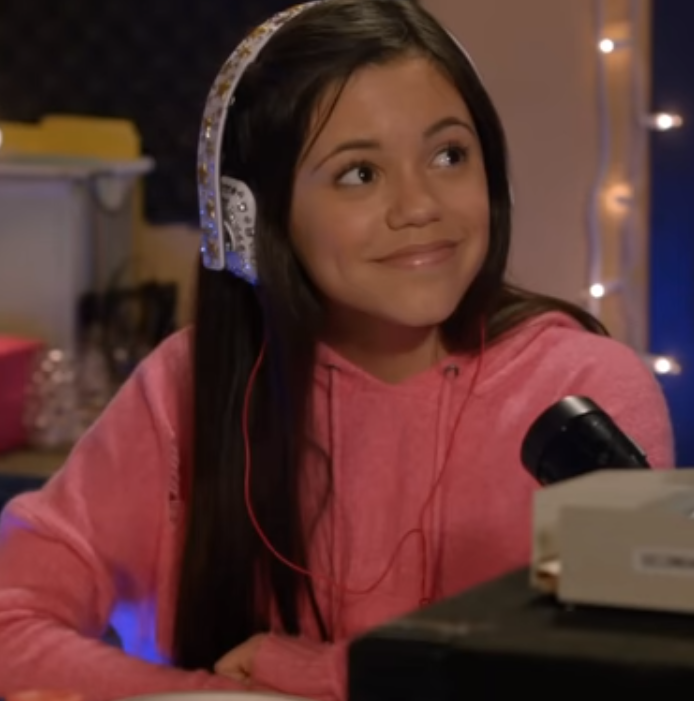 Jenna Marie Ortega (born September 27, 2002 ) is an American actress. She began her career as a child actress, receiving recognition for her role as young Jane on The CW comedy-drama series Jane the Virgin (2014–2019). She had her breakthrough for starring as Harley Diaz on the Disney Channel series Stuck in the Middle (2016–2018), for which she won an Imagen Award. She also performed the voice role of Princess Isabel on Elena of Avalor from 2016 to 2020.

Jenna Ortega was born on September 27, 2002, in Coachella Valley, California, the fourth of six children. Her father is of Mexican descent and her mother is of Mexican and Puerto Rican ancestry. Due to her career, Ortega has not "really lived a normal lifestyle" and has expressed regret at missing the traditional high school experience and teenage milestones such as prom and graduation.

Ortega had become interested in acting from the age of six. By the age of eight, with her mother's help and agents, she eventually began receiving auditions, and soon made her acting debut in 2012 with a guest appearance for Rob, in the episode "Baby Bug." Following this was an appearance on CSI: NY on the episode "Unspoken" as Aimee Moore. In 2013, she made her film debut with a minor role in the superhero movie Iron Man 3 as the vice president's daughter. Following this, Ortega starred in the horror film Insidious: Chapter 2, the second film in the Insidious franchise, as Annie, a supporting role. Both films were successful at the box-office.

In 2014, Ortega was cast in the role of Zoe Leon on the series Rake, and from 2014 to 2019, played the recurring younger version of Jane on the romantic-drama series Jane the Virgin. Also in 2014, she starred as Mary Ann in the direct-to-video comedy film The Little Rascals Save the Day. In 2015, Ortega was cast for the Netflix original series Richie Rich as part of the main cast, playing Darcy, a gold digger who spends Richie's money even without his consent; the show was panned. In the same year, she appeared in the film After Words as Anna Chapa.

In 2016, Ortega organized a meet and greet for fans to raise money for a young girl with cancer. In 2018, at the Radio Disney Music Awards, Ortega wore a jacket, which displayed the words "I Do Care And U Should Too" in response to first lady Melania Trump's apparel when she went to visit immigrant children who were being housed without their parents, which read "I Really Don't Care. Do U?". The stand gained significant media coverage. On the action, Ortega told Forbes: "I remember I was going through the news on my phone and I saw what Melania wore on the way to visit the immigrant children. I was so deeply offended and right there at that moment I knew what I wanted my statement to be..." Across 2019, Ortega appeared at numerous WE Day concerts across the United States and Canada to benefit WE Charity.

From 2016 to 2018, Ortega then went on to star in the lead of the Disney Channel sitcom Stuck in the Middle as Harley Diaz, the middle child of the seven Diaz siblings who is an aspiring inventor. The show was well received, and Ortega received an Imagen Award for her performance, as well as being nominated for two others. In the same year, she joined the cast on Disney's Elena of Avalor, as the voice of Princess Isabel, which ended in 2020. The show was well received, and she shared another Imagen Award win with the cast, as well as another nomination in 2019. In 2017, she starred in the music video for Jacob Sartorius' "Chapstick", which also stars the singer. In the video, Ortega played Sartorius' love interest, which gained significant media coverage.

In 2018, Ortega starred in the film Saving Flora as the lead role of Dawn, the daughter of a circus owner. The film received positive reviews from critics, and Ortega received praise for her performance. She received a nomination for Best Lead Actress at the Southampton International Film Festival. Ortega had been cast in the main role of Ellie Alves on the second season of the Netflix thriller series You, which was released on December 26, 2019. In You, her character is a smart and meddling girl who likes to act older than her true age. Ortega commented on working with co-stars Penn Badgley and Victoria Pedretti, stating that "I wish I had gotten to shoot with Victoria more, because I think she's really talented. ... Penn is such an eloquent speaker, so well-thought and so respectful and so kind, and just such a pleasure to work with." The season, alike to the show's first season, was praised as well as Ortega's performance.

In 2019, Ortega was cast as Pheobe in the Netflix horror film The Babysitter: Killer Queen. She said in an segment with Cosmopolitan that she had been "incredibly nervous" when they began filming, stating that "because it was a sequel, all of the other cast members already knew each other ... I went on the set panicking because I didn't know what I was doing." The film was released in September 2020, and received mixed reviews from critics. In 2020, Ortega voiced Brooklyn in the Netflix animated series Jurassic World Camp Cretaceous. The series was met with mixed reviews, although praise went towards Ortega's voicing and the rest of the cast. The series was renewed for a second season, slated to release in 2021. In 2020, Ortega announced that she would make her writing debut with the book It's All Love, which was released in January 2021. Ortega subsequently starred as Katie Torres in the Netflix comedy movie Yes Day; she was cast in 2019, and the film was released in March 2021 to mixed reviews, though her performance was praised.

Ortega played Ellie Alves in the second season of the Netflix thriller series You in 2019 and starred in the Netflix family film Yes Day (2021). She received critical praise for her performance in the teen drama The Fallout (2021), and went on to star in the slasher films X and Scream (both 2022), establishing herself as a scream queen. Also in 2022, Ortega played the role of Wednesday Addams in the Netflix comedy horror series Wednesday.

In 2020, Ortega was named a brand ambassador for Neutrogena. On becoming an ambassador, she told ¡Hola!: "I could not be more ecstatic. I say it over and over, but it really is such a surreal feeling, especially with such an iconic brand, that I have looked up to for such a long time." The following year, Ortega announced on her Instagram that she was partnering with Neutrogena on "For People with Skin", which is a "team commitment to advance skin health for all consumers, regardless of race, age, ethnicity, skin need, or income."

Ortega was cast as Tara Carpenter in the slasher film Scream in 2020, on which she stated that "I don't even think there are words in the English language to correctly express how happy, excited and nervous I am for this journey." Filming took place in Wilmington, North Carolina from September to November of that same year. On working with co-stars Neve Campbell, Courteney Cox and David Arquette, she stated that "You never know what to expect when you're meeting people of that standard, but they truly were just the most down-to-earth, sweetest people." The film was released on January 14, 2022, and emerged as a critical and commercial success, becoming the 28th-highest grossing film of 2022 and winning her the MTV Movie Award for Most Frightened Performance. Ortega additionally starred in the Foo Fighters-led horror film Studio 666, released in February, and the horror film X, from filmmaker Ti West, which was released in March. The latter earned critical acclaim, with Screen Rant writing that "Ortega, alongside her role-swapping co-star Mia Goth, is in rare form here, with the pair's performances as two horrified wannabe pornstars turned survivalists as shocking as they are compelling." Following her roles in the 2022 horror films Scream, Studio 666, X, and American Carnage she was dubbed a scream queen by several media outlets.

In March 2021, the high-school drama film The Fallout was released, in which Ortega portrayed the lead role of Vada; it was released on HBO Max on January 27, 2022. Cast in February 2020, filming took place over a month between August and September of that same year. It received a positive response from critics, and Ortega's acting was lauded, with several critics dubbing it her "breakout" film role. The Hollywood Reporter wrote: "...Ortega's beautifully nuanced turn understands the nothing-to-look-at-here façade and the chinks in the armor." Decider wrote similarly, praising her performance as "raw without going overboard. What could have been cliches along Vada's character path become earnest and real thanks to her commitment to the performance and a thorough understanding of its emotional beats." Variety magazine described Vada as her breakthrough film role, writing that "Ortega in particular seems to have found her voice." CinemaBlend praised the chemistry between her and her co-star Maddie Ziegler, and stated that the "two girls at the center of it all also look phenomenal, as a true bond can be sensed in the process of bringing this story to life." Mashable wrote that she "smoothly shoulders a role, richly written in lovingly messy complexities, and gives it breath as well as staggering sobs."

Ortega has stated that she feels taking more varied roles in acting is important to her, as to not be typecast; she told E! Online in 2021 that she did not want to be "pigeonholed as an actor," and that her desire to "do the most diverse roles that I possibly can and really switch up" made the transition to mature roles easier for her. She has said that horror works are what she feels most comfortable with starring in, telling Rotten Tomatoes in 2022 that she was "pretty comfortable with all the horror stuff".

Ortega will next star in the Paramount+ thriller film Finestkind alongside Tommy Lee Jones, Ben Foster and Toby Wallace and reprise the role of Tara Carpenter in an untitled sixth Scream film. In September 2022, she joined the cast of Lionsgate and Point Grey’s Miller’s Girl, opposite Martin Freeman. Ortega called her character in Miller's Girl, "the most complex character that I’ve ever played" and described the material as risky.

Also in Tim Burton's supernatural series Wednesday (2022), Ortega plays the titular role of Wednesday Addams, which she called a "new chapter" in her career, stating that she hopes to "do Wednesday Addams justice." To prepare for the role, Ortega underwent "the most physical transformation I've ever done; I cut my hair, and it's black, and mannerism-wise, speaking cadence-wise, expression-wise, I'm trying to pull from a different toolbox this time around. I think it's a surprise to the audience, but myself as well." She later called production of season one "the most overwhelming job" she had ever had and spoke about being in a constant state of confusion and stress over the direction of the series and character. Ortega's performance in the series garnered her widespread acclaim, with some critics deeming it the best rendition of the character yet. She was crowned "Performer of the Week" by TVLine in December 2022.