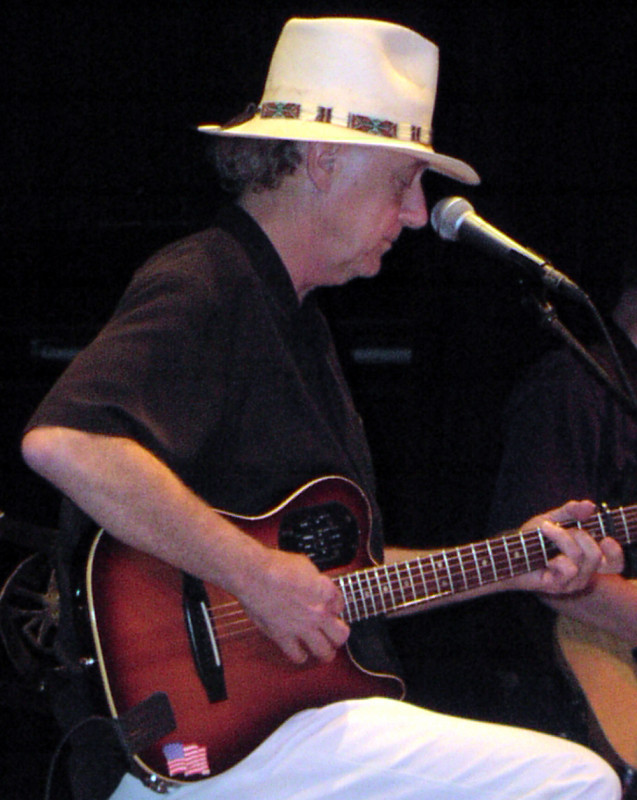 Jerry Jeff Walker (born Ronald Clyde Crosby; March 16, 1942 – October 23, 2020) was an American country music singer and songwriter. He was a leading figure in the outlaw country music movement. He was best known for having written the 1968 song "Mr. Bojangles".

Walker was born Ronald Clyde Crosby in Oneonta, New York, on March 16, 1942. His father, Mel, worked as a sports referee and bartender; his mother, Alma (Conrow), was a housewife. His maternal grandparents played for square dances in the Oneonta area – his grandmother, Jessie Conroe, playing piano, while his grandfather played fiddle. During the late 1950s, Crosby was a member of a local Oneonta teen band called The Tones.

After high school, Crosby joined the National Guard, but his thirst for adventure led him to go AWOL and he was eventually discharged. He went on to roam the country busking for a living in New Orleans and throughout Texas, Florida, and New York, often accompanied by H. R. Stoneback (a friendship referenced in 1970's "Stoney"). He first played under the stage name of Jerry Ferris, then Jeff Walker, before amalgamating them into Jerry Jeff Walker and legally changing his name to that in the late 1960s.

Notable covers of the song include a live version by his bandmate Bromberg on his album Demon in Disguise and a single by the Nitty Gritty Dirt Band that charted at number 9 on the Billboard Hot 100 in 1971 (also released on their album Uncle Charlie & His Dog Teddy).

Walker married Susan Streit in 1974 in Travis County, Texas. They had two children: a son, Django Walker, who is also a musician, and a daughter Jessie Jane. Walker had a retreat on Ambergris Caye in Belize, where he recorded his Cowboy Boots and Bathing Suits album in 1998. He also made a guest appearance on Ramblin' Jack Elliott's 1998 album of duets Friends of Mine, singing "He Was a Friend of Mine" and Woody Guthrie's "Hard Travelin'".

A string of records for MCA and Elektra followed Jerry Jeff's move to Austin, Texas, before he gave up on the mainstream music business and formed his own independent record label. Tried & True Music was founded in 1986, with his wife Susan as president and manager. Susan also founded Goodknight Music as his management company and Tried & True Artists for his bookings. A series of increasingly autobiographical records followed under the Tried & True imprint, which also sells his autobiography, Gypsy Songman. In 2004, Walker released his first DVD of songs from his past as performed in an intimate setting in Austin.

Walker's "Mr. Bojangles" (1968) is perhaps his best-known and most-often covered song. It is about an obscure alcoholic but talented tap-dancing drifter who, when arrested and jailed in New Orleans, insisted on being identified only as "Bojangles" (which happened to be the nickname of famed dancer Bill Robinson, leading to speculation that Robinson was the subject of the song). In his autobiography, Gypsy Songman, Walker made it clear the man he met was white, which would indicate that Robinson was not the inspiration. Further, in an interview with BBC Radio 4 in August 2008, he pointed out that at the time the jail cells in New Orleans were segregated along color lines, so his influence could not have been black.

Walker had an annual birthday celebration in Austin at the Paramount Theatre and at Gruene Hall in Gruene, Texas. This party became an enormous event in Texas and brought some of the biggest names in country music out for a night of picking and swapping stories. The New York Times Magazine reported in June 2019 that Walker was among hundreds of artists whose material was reportedly destroyed in the 2008 Universal Studios fire.