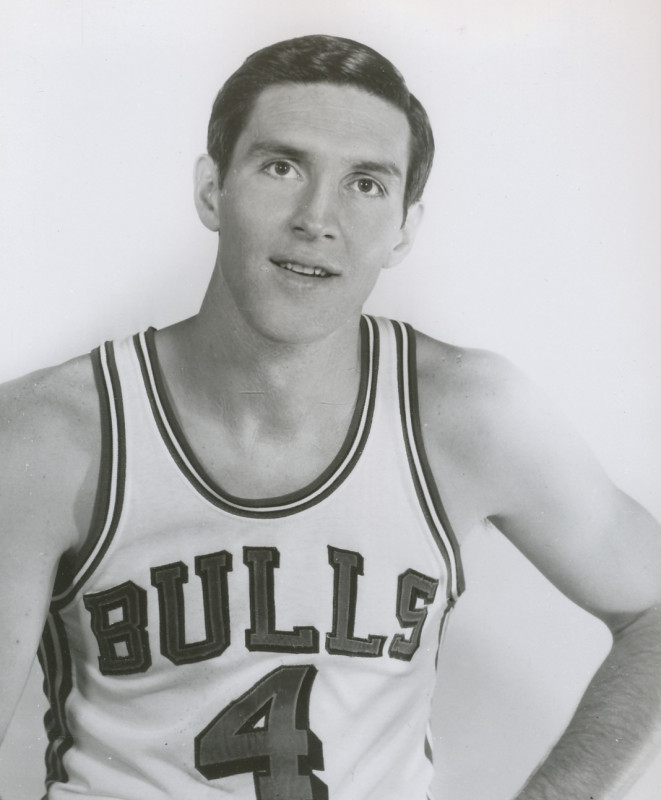 Gerald Eugene Sloan (March 28, 1942 – May 22, 2020) was an American professional basketball player and coach. He played 11 seasons in the National Basketball Association (NBA) before beginning a 30-year coaching career, 23 of which were spent as head coach of the Utah Jazz (1988–2011). NBA commissioner David Stern referred to Sloan as "one of the greatest and most respected coaches in NBA history". Sloan was inducted into the Naismith Memorial Basketball Hall of Fame in 2009.

Born and raised in Gobbler's Knob, Illinois, 15 miles (24 km) south of McLeansboro, Illinois, Sloan was the youngest of 10 children and was raised by a single mother after his father died when Jerry was 4 years old. He would wake up at 4:30 a.m. to do farm chores and then walk almost two miles to get to school in time for 7 a.m. basketball practice. Sloan graduated an all-state player from McLeansboro High School in 1960.

Sloan attended the University of Evansville and played college basketball for the Purple Aces. He was selected 19th overall in the 1964 NBA draft by the Baltimore Bullets. But he remained in college and led the Purple Aces to their second in two consecutive Division II national titles and his second with the squad. He then was selected fourth in the 1965 NBA draft by the Bullets. The Chicago Bulls, an expansion team, selected Sloan in the 1966 NBA expansion draft. He became known as "the Original Bull", known for his tenacious defense, leading them to the playoffs in their first season, and to their first and only division title before the Michael Jordan era; after a series of knee injuries, he retired in 1976. He scored more than 18 points a game in 1970–71, and had three other seasons of more than 15 points per game. At a height of 6 ft 5 in (1.96 m), his career rebounding average was 7.4 rebounds per game, with one season having an average of 9.1 rebounds. He was a career 72 percent free throw shooter. His number 4 jersey was subsequently retired by the Chicago Bulls in 1978, becoming the first retired jersey in franchise history.

After playing college basketball with the Evansville Purple Aces, Sloan was selected by the Baltimore Bullets with the fourth overall pick of the 1965 NBA draft. He spent his rookie season with the Bullets before playing the remainder of his career with the Chicago Bulls, retiring due to injuries in 1976. Nicknamed "the Original Bull", he was a two-time NBA All-Star and the first player to have his number retired by the Bulls. Sloan then became a coach, and had a career regular-season win–loss record of 1,221–803, placing him third all time in NBA wins at the time he retired. He was the fifth coach to reach 1,000 NBA victories and is one of two coaches in NBA history to record 1,000 wins with one club (the Utah Jazz). Sloan coached the Jazz to 15 consecutive playoff appearances from 1989 to 2003. He is one of only four coaches in NBA history with 15-plus consecutive seasons that have a winning record. He led Utah to the NBA Finals in 1997 and 1998, but lost to Chicago both times.

While at Evansville, coach Arad McCutchan suggested that Sloan coach at his alma mater. After retiring in 1976, Sloan took the Evansville job, but withdrew after five days. That same season, the Evansville basketball team and coaching staff were killed in a plane crash at Evansville Airport. Two years later, Sloan was hired by the Bulls as a scout. After one season in this role, he became an assistant coach with the team. In 1979, Sloan was promoted to the position of head coach. He held the position for less than three seasons, winning 94 games and losing 121. He led the team to the playoffs in his second year, but was fired after a poor start during the following campaign. After departing Chicago, Sloan became a scout for the Utah Jazz for one season. He then became coach of the Evansville Thunder of the Continental Basketball Association for the 1984 season but never coached a game instead accepting an assistant coach position with the Jazz. After Frank Layden became team president in December 1988, the Jazz chose Sloan as the new head coach. Sloan enjoyed a successful run of 16 consecutive seasons of taking his team to the playoffs, during which time he coached future Hall of Famers Karl Malone and John Stockton, along with other players including Jeff Hornacek, Antoine Carr, Tom Chambers, Mark Eaton, and Jeff Malone. Sloan led the Jazz to six division championships and 10 seasons with greater than 50 wins. He also took the Jazz to the NBA Finals twice, losing in 1997 and 1998, both times to his old team, the Michael Jordan-led Bulls. By the end of this period, he had joined Pat Riley and Phil Jackson as the only coaches with 10 or more seasons winning 50 or more games. After the retirement of long-time Jazz players Malone and Stockton, Sloan coached a younger group of players, including Carlos Boozer, Andrei Kirilenko, Mehmet Okur, and later, Deron Williams. After John Stockton retired and Karl Malone signed with the Lakers in the summer of 2003, the 2003-2004 Jazz were widely predicted to be the worst team in the NBA and some even predicted that Utah would set the all-time single season record for fewest wins in a season. Despite the very low expectations and despite second leading scorer Matt Harpring being sidelined for 51 games due to a knee injury, Sloan and his team were involved in a battle for the eighth spot in the Western Conference, which would have given Sloan his 17th straight trip to the playoffs. The Jazz were tied with the Denver Nuggets for the eighth and last spot of the playoffs with three games to go in the regular season. The Jazz lost the final two games, causing Sloan to miss the playoffs for the first time in 18 seasons as Jazz coach. After leading a young team in its first year without Stockton and Malone to an unexpected 42–40 record, he finished just behind Hubie Brown of the Memphis Grizzlies in voting for the 2004 NBA Coach of the Year Award.

Sloan married his high-school sweetheart, Bobbye. After a well-publicized six-year battle against breast cancer, she died of pancreatic cancer in 2004. They had three children and were married 41 years. One of his sons, Brian, was an all-state center for McLeansboro High School and was a member of its undefeated 1984 Class A IHSA basketball championship team. After leading the Foxes to the championship, Brian Sloan was named Illinois Mr. Basketball and was a McDonald's All-American for 1984 in Illinois. Brian Sloan also played five seasons under Coach Bob Knight at Indiana University, collecting an NCAA Division I basketball title in 1987, where he pledged Beta Epsilon. Brian's son, and Jerry's grandson, Grant is a member of the Indiana University baseball team. In 2006, Jerry Sloan married Tammy Jessop, in Salt Lake City. Sloan had a stepson, Rhett, as a result of this marriage. Sloan was known to wear John Deere hats, collected antique furniture and dolls. He also collected and restored tractors as a hobby. After amassing a collection of tractors that numbered 70, Sloan decided to sell all but two of them after a 35-year-old Allis-Chalmers tractor was stolen. After years of a self-confessed habit of drinking and smoking too much, he stopped both, although he said it never affected him or his coaching.

After Tom Kelly stepped down as manager of the Minnesota Twins in Major League Baseball in 2001, Sloan became the longest-tenured head coach in American major league sports with their current franchise. He resigned mid-season from the Jazz in 2011 before returning in 2013 as an adviser and scouting consultant.

Sloan collected his 1,000th career win against the Dallas Mavericks on December 11, 2006, in a 101–79 victory, which made him only the fifth coach in NBA history to reach the milestone. After disappointing seasons in 2004–05 and 2005–06, the Jazz in the 2006–07 returned to contention. For this, Sloan was again on many sportswriters ballots for Coach of the Year, however he lost the award to Toronto Raptors head coach Sam Mitchell, who led his team to a franchise record-tying 47 victories and their first Atlantic Division title. Sloan lost the vote 394–301.

In April 2009, Sloan was named to the Naismith Memorial Basketball Hall of Fame, in the same class as his former longtime point guard John Stockton. Sloan chose class of 2006 Hall of Famer Charles Barkley to introduce him during his induction ceremony.

Sloan revealed on February 7, 2011, that he had earlier in the year signed a contract extension to coach the Jazz for the 2011–12 season, which would have been his 24th season as head coach with the Jazz. However, on February 10, 2011, Sloan and assistant Phil Johnson resigned their positions effective immediately. Sloan downplayed reports that conflicts with players prompted his departure. "I've had confrontations with players since I've been in the league", Sloan said. "There's only so much energy left and my energy has dropped." KSL-TV later asked Sloan whether reported conflicts with guard Deron Williams forced him to leave. "I forced myself out", Sloan responded. Williams acknowledged that he had a disagreement with Sloan during the previous night's game, but he added, "I would never force Coach Sloan out of Utah. He's meant more to this town, more to this organization than I have by far. I would have asked out of Utah first." Sloan's last game as head coach came in a 91–86 loss to the Bulls on February 9, and assistant coach Tyrone Corbin was then named as Sloan's replacement.

Nearly two weeks later, Williams was involved in a trade on February 23, 2011, that sent him to the New Jersey Nets. Ian Thomsen of Sports Illustrated wrote, "First Jerry Sloan leaves, now Williams is sent away. For two decades we knew who the Utah Jazz were and what they stood for as a franchise. Now we, and they, can have no idea."

On June 19, 2013, the Utah Jazz announced that Sloan was returning as an adviser and scouting consultant.

In April 2016, Sloan was diagnosed with Parkinson's disease and Lewy body dementia. He died on May 22, 2020, at age 78, from complications of the diseases.