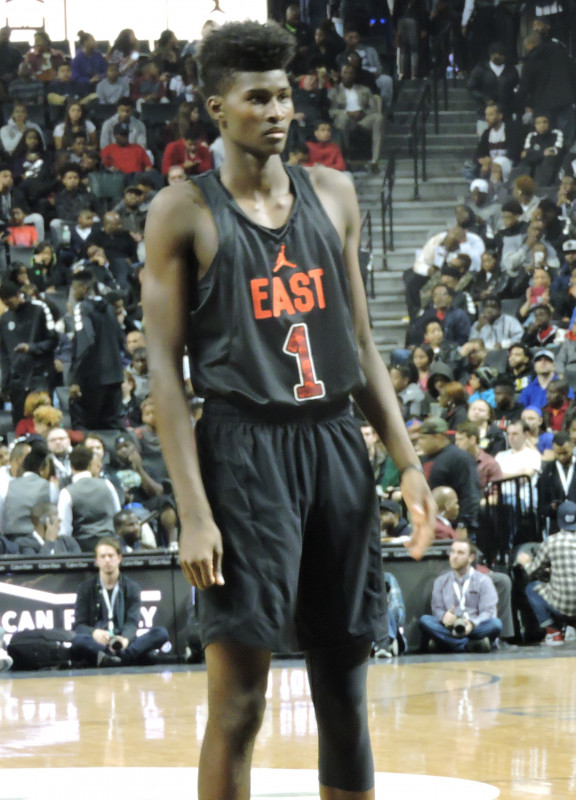 Jonathan Judah Isaac (born October 3, 1997) is an American professional basketball player for the Orlando Magic of the National Basketball Association (NBA). He played college basketball for one season for the Florida State Seminoles. He was selected by Orlando in the first round of the 2017 NBA draft with the sixth overall pick.

Isaac first attended Barron Collier High School in Naples, Florida during his freshman and sophomore years. In his junior and senior years, he attended the International School of Broward in Hollywood, Florida. However, as a result of wanting to be reclassified as part of the high school class of 2016, Isaac also attended IMG Academy for what was considered to be a postgraduate year in 2016. As a senior in 2016, he averaged 17.6 points per game and 10.0 rebounds per game while leading IMG Academy to a 21-10 overall record. In his high school career, he grew six inches from his freshman year to his senior year, going from a combo guard of sorts to the combo forward he is today. Issac was selected to play in the 2016 Jordan Brand Classic and Nike Hoop Summit All-Star games. Isaac was rated as a five-star recruit and ranked as the No.12 overall recruit and No.4 Small forward in the 2016 high school class. On July 5, 2015, Isaac confirmed that he was going to commit to Florida State after his senior year of high school ended.

Before the 2016–17 season began, Isaac was considered a preseason watch for the Karl Malone Award. On November 15, in his second game of the season, he recorded 20 points in a 99–78 win over Iona. Isaac would record his first double-double of the season with 14 points and 10 rebounds in a 100–71 win over Detroit on November 20. He'd earn the ACC Freshman of the Week award for his performances from November 15–21, 2016. On January 18, 2017, Isaac recorded 23 points, 10 rebounds, and a season-high 7 blocks in a win over the Notre Dame Fighting Irish. On February 8, 2017, Isaac scored 21 points in a 95–71 victory against the NC State Wolfpack. Throughout the season, Isaac was considered a team leader alongside fellow prospects Dwayne Bacon and Xavier Rathan-Mayes, to the point where they at one point were considered the sixth-best team of the nation. As the second seed in the ACC Tournament, Florida State beat Virginia Tech in the quarterfinals, but lost to Notre Dame in the semi-finals. His team then proceeded to the NCAA Tournament, where they were seeded 3rd in the West. They won their first-round game 86–80 against FGCU at Amway Center in Orlando, Florida. However, they lost in the round of 32 in a blowout upset against 11th seeded Xavier, 66–91. Isaac scored just 25 points in two games In his NCAA Tournament career. At the conclusion of his freshman season, he was named to the All-ACC Freshman Team of 2017. In addition to that, Isaac announced his intention to forgo his final three years of collegiate eligibility and enter the 2017 NBA draft where he was projected as a lottery first round selection. He was the second player in Florida State's basketball history to leave as a one-and-done prospect, behind Malik Beasley in 2016.

On February 5, 2016, he announced his intention of testing the possibility of entering the 2016 NBA draft as the first American postgraduate to jump directly from high school to the NBA draft since 2005. He was also considered a prospect that could have been taken in the middle or late first round had he committed to it. Four days after making that announcement, however, Isaac confirmed that he wasn't going to enter the 2016 draft after all and reaffirmed his intentions of playing with Florida State for the 2016–17 season.

On June 22, 2017, Isaac was selected with the sixth overall pick in the 2017 NBA draft by the Orlando Magic. On December 28, he was ruled out with a right ankle sprain. On February 23, 2018, he was assigned to the Lakeland Magic of the NBA G League for rehabilitation purposes.

On January 1, 2020, Isaac suffered a posterior lateral corner injury and a medial bone contusion during a 122–101 win over the Washington Wizards and was expected to be sidelined for about eight to ten weeks.

On July 31, 2020, Isaac became the first NBA player not to kneel during the national anthem since the league resumed in the NBA Bubble on July 30, 2020. All players from the four teams in action all knelt during the pre-game anthem. Isaac chose not to wear a Black Lives Matter t-shirt, said "Absolutely, I believe Black lives matter. A lot went into my decision. Kneeling or wearing a Black Lives Matter T-shirt doesn't go hand in hand in supporting Black lives." Magic coach Steve Clifford said "We're all supporting each other in this. And if guys are not comfortable kneeling and they want to stand, nobody has a problem with that. I support him. His teammates support him. The organization supports him. That's part of living in our country."