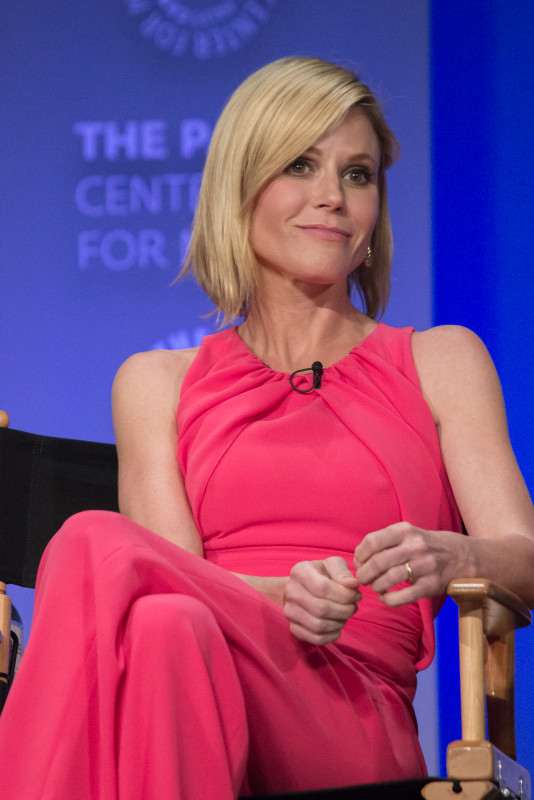 Julie Bowen Luetkemeyer (born March 3, 1970) is an American actress. She is best known for starring as Claire Dunphy in the ABC sitcom Modern Family (2009–2020), for which she received critical acclaim and six nominations for the Primetime Emmy Award for Outstanding Supporting Actress in a Comedy Series, winning in 2011 and 2012.

Bowen married Scott Phillips, a real estate investor and software developer, on September 9, 2004. They have three sons, the first born in April 2007, and twins born in May 2009, with whom she was visibly pregnant when shooting the pilot for Modern Family. She is a self-described "low Protestant." In February 2018, she filed for divorce from Phillips. It was finalized on September 13, 2018.

Bowen had a recurring role as Roxanne Please on ER (1998–99). She first gained prominence on the television series Ed (2000–04), where she played high school English teacher Carol Vessey. She then guest starred as Sarah Shephard in five episodes of Lost (2005–07). She also played attorney Denise Bauer on the series Boston Legal (2005–08), and had a recurring role on Weeds (2008). She was a spokesmodel for Neutrogena, most recently advertising the Pure Glow products. She appeared on an episode of Celebrity Jeopardy! on August 31, 2010.

From 2009 to 2020, Bowen starred as Claire Dunphy on the ABC sitcom Modern Family. For her portrayal, she received six consecutive Primetime Emmy Award nominations for Outstanding Supporting Actress in a Comedy Series (2010–15), winning the award in 2011 and 2012. Bowen has said that winning an Emmy is like "German soldiers in the trenches of the World Wars" and that "when you win the award, it is like being pulled out of the trench." She also said, "as exciting and wonderful as it is not to be in the trench, and to be recognized for what you do, it also means everyone has got a clear shot at you and that is a very frightening prospect for most of us."

In 2016, Bowen appeared in "Fight Song", a Pitch Perfect-inspired music video shown at the Democratic National Convention in support of nominee Hillary Clinton.