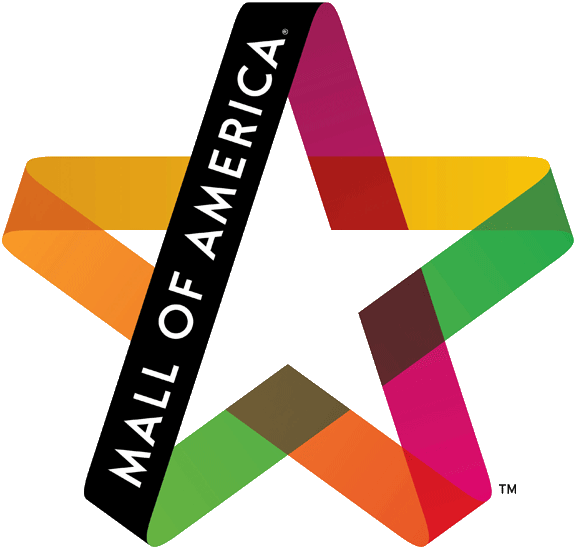 The mall's concept was designed by the Triple Five Group in conjunction with global design firm DLR Group, owned by the Ghermezian brothers, who also own the second largest shopping mall in North America, the West Edmonton Mall. The Mall of America is located on the site of the former Metropolitan Stadium, where the Minnesota Vikings and Minnesota Twins played until the Hubert H. Humphrey Metrodome opened in 1982. A plaque in the mall's amusement park commemorates the former location of home plate and one seat from Met Stadium was placed in Mall of America at the exact location it occupied in the stadium, commemorating a 520-foot (160 m) home run hit by hall-of-famer Harmon Killebrew on June 3, 1967.

In 1986, the Bloomington Port Authority signed an agreement with the Ghermezian organization. Groundbreaking for the mall took place on June 14, 1989. Organizations involved include Melvin Simon and Associates, Teachers Insurance and Annuity, and the office of architect Jon Jerde.

Mall of America (MOA) is a shopping mall located in Bloomington, Minnesota, a suburb of the Twin Cities in Minnesota, United States. It lies southeast of the junction of Interstate 494 and Minnesota State Highway 77, north of the Minnesota River, and across the Interstate from the Minneapolis St. Paul International Airport. It opened in 1992, and is the largest mall in the United States, the largest in the Western Hemisphere, and the ninth largest shopping mall in the world.

On December 28, 2018, it was announced that Sears (which had been at the Mall of America since its opening in 1992) would be closing as part of a plan to close 80 stores nationwide.

Mall of America opened its doors to the public on August 11, 1992. Its anchors were Nordstrom, Macy's, Bloomingdale's and Sears. Even before opening, the mall had earned several nicknames, including "The Megamall", "Sprawl of America", "Hugedale" in reference to the four major "dale" shopping malls within the Twin Cities: Rosedale, Southdale, Ridgedale and the now-defunct Brookdale.

On September 4, 1995, the mall hosted the first episode of WCW Monday Nitro.

In 2003, after a protracted six-year legal battle between Simon Property Group, the managing general partner of the property, and the Ghermezian brothers/Triple Five Group, over majority ownership of the site, a federal appeals court ruled in favor of the Ghermezians, effectively transferring control and planning authority of the mall back to the creator of the concept. The dispute stemmed from a 1999 purchase of Teacher's Insurance's 27.5% equity stake by Simon Properties, giving them majority ownership. The Ghermezians claimed they were never told of the deal and sued Simon, citing fiduciary responsibility. On November 3, 2006, the Ghermezians gained full control of Mall of America by spending US$1 billion.

Two nearly identical seven-story parking ramps on the east and west sides of the mall provide 12,287 parking spaces. Overflow parking north of the building provides an additional 1,200–1,500 spaces and 1,407 spaces are provided by IKEA, which opened in July 2004.

Behavior Detection Officers (BDOs) are trained extensively in Israel, each one going through at least 240 hours of training that includes communication techniques, first aid, defensive tactics, crisis intervention, terrorism awareness and rapid response. As Doug Reynolds, the former Security Director at the mall noted in a congressional testimony in 2008, BDOs are taught to "look for intent, rather than means. The objective is to focus on suspicious indicators in three categories: People, vehicles and unattended items like backpacks, shopping bags, suitcases." This methodology has prepared the mall for a variety of threats, both from terrorists and everyday criminals.

When Camp Snoopy became Nickelodeon Universe in 2008, the Kite-Eating Tree was restyled and renamed Swing-Along.

On May 18, 2008, the Mall of America received a tax break for a proposed $2 billion expansion. The bill gave the city of Bloomington the ability to increase taxes on sales, lodging and food and beverages to finance a parking ramp at the mall. On March 24, 2012, the Triple Five Group, partnered with architectural firm DLR Group, announced the start of a $200 million expansion that would build into the north parking lot of the mall. The plans called for an additional hotel and an additional 200,000 square feet (19,000 m ) of retail space. The project broke ground in the fall of 2013 and began opening in stages in the summer of 2015. In March 2014, ground was broken on the mall's north side for the $104 million, 14-story JW Marriott hotel, owned and financed by the Shakopee Mdewakanton Sioux Community. In 2018, it was announced that MOA had proposed to build an indoor water park, with a cost between $150 to $200 million for the project. In March 2022, the plan was approved by the Bloomington city council.

In 2010, it was noted that mall security officials were instructed to question or detain individuals exhibiting what they deemed "suspicious behavior". Signs of suspicious behavior included photographing air-conditioning ducts, or signs that a shopper was hiding something. At the time, some officials within the Bloomington Police Department worried that the mall's security methods may infringe on rights.

In 2011, NPR's All Things Considered and Morning Edition and PBS's NewsHour both aired programs documenting security abuses by the mall's security personnel. On December 31, 2013, members from the First Nations protest movement Idle No More attempted to repeat a successful Native-American round dance held at the mall in 2012, but failed after being stopped by mall security. Organizers of the dance, Patricia Shepard and Reyna Crow from Duluth were arrested on site for trespassing.

During its run as an all-encompassing entertainment and retail venue, certain aspects, particularly its bars, have come under scrutiny. In early-2000 a Mardi Gras-themed bar, Fat Tuesday, shut its doors due to indecent exposure and alcohol-related offenses. On November 29, 2011, Google announced indoor maps for Mall of America along with several other places like airports, parks and public spaces. On January 3, 2012, Macy's Inc. announced it would close its Bloomingdale's location at the Mall of America after nearly 2 decades.

On December 21, 2014, thousands of protesters attended an unauthorized demonstration organized by Black Lives Matter in the mall's rotunda. The demonstration was in response to the Michael Brown fatal shooting in Ferguson, Missouri and the then recent jury decision not to prosecute the white officer in that case, as well as the death of Eric Garner of New York. In response to the demonstration, the Mall of America closed the areas of the mall around the rotunda. Police arrested 25 demonstrators. The Bloomington City Attorney, Sandra Johnson, pursued charges against the organizers, and the city is sought compensatory damages from some of the organizers for out-of-pocket costs the city incurred while paying overtime for additional security. In response to these charges, demonstrators have called for a boycott of the mall.

In February 2015, the al-Shabaab militant group also released a propaganda video calling for attacks on the Mall of America and other Western shopping centers. Although the group had never launched attacks in North America, security at the mall was tightened in response and Homeland Security issued a one-day alert to shoppers to remain vigilant.

Plans for another Black Lives Matter demonstration at the Mall of America on December 23, 2015, prompted mall officials to file a restraining order against the movement's activists. Eight individual activists were sued in Hennepin County District Court. The mall's lawsuit would prohibit the defendants from demonstrating and require them to delete all of their posts to social media pertaining to the demonstration. The lawsuit additionally asked that the court jail Black Lives Matter activists unless they publicly announce that the demonstration is cancelled on their social media accounts. The American Civil Liberties Union of Minnesota called the mall's lawsuit an "improper prior restraint on speech" and an unconstitutional overreach.

Al's Farm Toys, a farm-themed toy store that closed in 2016

The Theatres at Mall of America opened three days after the grand opening of the mall. Initially, the cinema was run by General Cinemas, but it was bought out then rebranded by AMC Theatres, and eventually operated by mall management. The cinema occupied the south side of the fourth floor through December 2016, when it closed permanently. It was replaced by Cinemex subsidiary CMX Cinemas in late 2017. Due to CMX Cinema's bankruptcy proceedings, CMX Mall of America closed down and replaced with B&B Theatres in 2021.

On April 12, 2019, a five-year-old was thrown from a third story balcony by Emmanuel Deshawn Aranda. The boy was in the hospital for over five months and eventually recovered. Aranda was sentenced to 19 years in prison in June with possibility for parole after 12 years served.

The mall is not a park and ride facility, and overnight parking is banned to prevent passengers taking the train to the airport. Commuters are required to use the nearby 28th Avenue station's parking ramp. The station underwent a $25 million upgrade which was completed in October 2019.

On December 31, 2021, a single gunshot was fired on the north side of the third floor of the mall. A patrolling Bloomington Police Department officer who heard the shot immediately notified mall security, who activated the mall's lockdown alarm. Responding officers found a man who had been shot in the leg when they arrived at the scene and later another injured person was found who appeared to have been grazed by the bullet. The first victim was transported to the hospital while the second was treated on the scene by paramedics and released. According to a statement by Deputy Chief Kim Clausen there was an "altercation" between two men that resulted in one shooting the other. After a thorough search of the mall by police and security officers the lockdown was lifted approximately 40 minutes after it started and the mall closed for the rest of the day shortly thereafter. On January 3, 2022 a young man identified as leaving the scene of the shooting with the shooter was arrested for aiding and abetting first-degree assault and on January 4, police arrested the suspect on assault charges and in a subsequent search of the house found a gun.

On August 4, 2022, the mall was put under lockdown after two men fired gunshots during an altercation at the Nike store who then fled . Two-time NASCAR Cup Series champion Kyle Busch was in the mall with his family at the time; they were unharmed. The two alleged shooters were apprehended a week later in Chicago. Three people were also arrested for allegedly aiding the shooters as they fled the scene and hid from authorities at a nearby Best Western hotel.

There are also junior anchors, including L.L.Bean, Barnes & Noble, DSW, Marshalls. As well as the former Best Buy and American Girl stores, with the latter being replaced with a 24,000-square-foot M&M's retail store, which opened in late 2020.