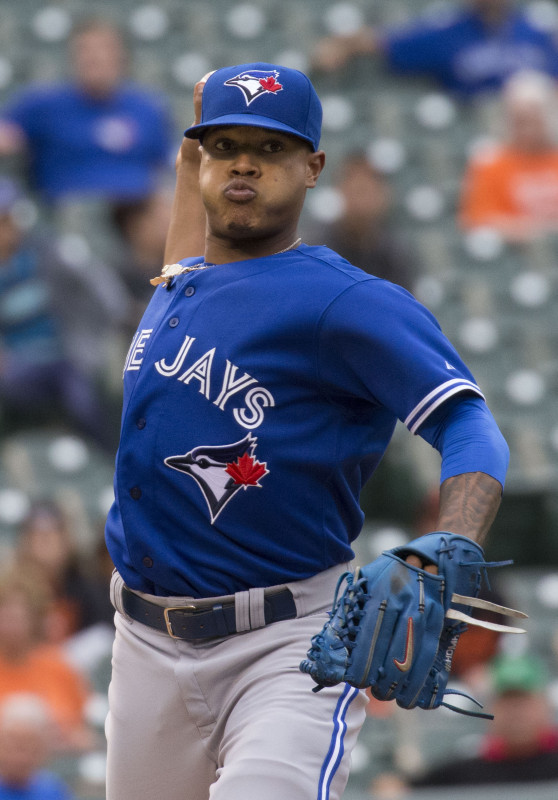 On September 17, Stroman was suspended six games and fined an undisclosed amount for intentionally throwing at Caleb Joseph during a game against the Baltimore Orioles. Immediately following the announcement, he filed an appeal of the suspension. On September 21, Stroman dropped his appeal, and MLB reduced his suspension to five games. It was announced shortly afterward that upon his return from the suspension, he would be moved to the bullpen for the remainder of the season. Stroman pitched four innings in relief of Drew Hutchison's final start of the season on September 26, and earned his first career save. He did not appear in the final two games of the Blue Jays season, and finished 2014 with an 11–6 record, 3.65 ERA, 111 strikeouts, and a 1.17 WHIP in 1302⁄3 innings pitched.

On February 14, 2017, it was announced that Stroman had won his arbitration case and would receive a $3.4 million salary for the 2017 season. In a 6–5 win over the St. Louis Cardinals on April 25, Stroman recorded the first hit of his career. His double to left field was the first ever pinch hit by a Blue Jays pitcher, and also the first extra-base pinch hit by an American League pitcher since Gary Peters in 1971. Stroman hit an opposite field home run off Julio Teherán in the Blue Jays 9–0 win over the Atlanta Braves on May 18, 2017. In doing so, Stroman became just the second Blue Jays pitcher to hit a home run, joining Mark Hendrickson, who did so on June 21, 2003. Stroman's home run followed Luke Maile's solo shot, making the batterymates the first to hit back-to-back home runs since 1970. He also became the first pitcher listed 5' 8" or shorter to hit a home run in the majors since Tom Phoebus of the Baltimore Orioles did so in 1968. On July 3, Stroman left a game against the New York Yankees after five innings when a blister developed on his right middle finger, though the injury did not cause him to miss a start. Stroman was hit on the right elbow by a line drive in Toronto's 7–2 win over the Baltimore Orioles on September 2, and was forced to leave the game, though he was once again able to make his next start.

Marcus Earl Stroman (born May 1, 1991) is an American professional baseball pitcher for the Chicago Cubs of Major League Baseball (MLB). He previously played in MLB for the Toronto Blue Jays and New York Mets. Stroman is listed at 5 feet 7 inches (1.70 m), making him one of only six pitchers shorter than 5 feet 10 inches (1.78 m) to make a start at the MLB level in the 21st century.

Marcus Earl Stroman was born in Medford, New York, on May 1, 1991. He attended Patchogue-Medford High School in Medford, where he enjoyed a high school rivalry with Steven Matz, a friend and future New York Mets teammate, who was pitcher for the nearby Ward Melville High School. Matz and Stroman were teammates on the same elite travel team, the Paveco Storm, for several years in junior high and high school. The two were roommates during the Area Code Games and pitched against each other several times in high school, including a notable game on April 16, 2009, which was attended by more than 50 scouts from every MLB team, and is considered one of the best games in the history of Long Island high school baseball. Matz struck out 12 and allowed one hit, leading his team to a 1–0 victory, while Stroman struck out 14 and allowed three hits. Both pitchers threw complete games. Mets scout Larry Izzo later called it "one of the best duels I've ever seen".

In 1997, a six-year-old Stroman made an appearance on the Nickelodeon game show Figure It Out.

At Duke, Stroman compiled a career record of 15–13 in 48 appearances, and set the Duke record for career strikeouts (290 over 222 innings pitched). He was also a position player for Duke, making 97 appearances, mostly at second base and shortstop. In 2010 and 2011, he played collegiate summer baseball for the Orleans Firebirds of the Cape Cod Baseball League, and was named a league all-star in 2010.

Billed by analysts as the most major league ready player available in the 2012 MLB draft, Stroman was drafted by the Jays 22nd overall, and became the first Duke player ever selected in the first round. After starting his professional career with the Low-A Vancouver Canadians, the Blue Jays promoted Stroman to the Double-A New Hampshire Fisher Cats on August 1, 2012. Stroman was suspended for 50 games on August 28, 2012, for testing positive for methylhexanamine, a banned stimulant.

Stroman attended Duke University, and played college baseball for the Duke Blue Devils. He made his MLB debut with the Blue Jays in 2014. In 2017, he was the World Baseball Classic MVP. After the regular season, he won a 2017 Gold Glove Award. Stroman was named an All-Star in 2019, and the Blue Jays traded him to the Mets later in the 2019 season.

Stroman was called up to the Blue Jays on May 3, 2014, after Brandon Morrow was transferred to the 60-day injured list. At the time of his call-up, he was considered the organization's number two prospect. He earned his first MLB victory on May 6, pitching 11⁄3 innings in relief of Drew Hutchison. Stroman was optioned back to Triple-A Buffalo on May 18, and was recalled on May 30 to make his first Major League start the following day. He pitched six innings and surrendered only one earned run on five hits, striking out six and issuing no walks to earn the win over the Kansas City Royals. On August 9, Stroman pitched nine innings for the first time in his career, but came away with a no-decision as the Blue Jays defeated the Detroit Tigers 3–2 in extra innings. He would earn his first complete game and shutout on September 8, needing only 93 pitches to beat the Chicago Cubs, 8–0. Stroman yielded only three hits and at one point had retired 19 consecutive batters.

On October 6, 2014, Stroman announced through his Twitter account that he would change his uniform number from 54 to 6 in honor of his grandmother. During 2015 spring training, Stroman suffered a torn anterior cruciate ligament in his left knee. He underwent a successful surgery, performed by Dr. James Andrews, to repair his ACL. Stroman was placed on the 60-day disabled list on April 5. While rehabbing the injury, Stroman returned to Duke University to finish his degree, majoring in Sociology with a minor in Markets and Management Studies.

On November 15, 2019, Stroman announced via Twitter he was switching to number 0 for the 2020 season and also changed his Twitter handle to @STR0. Earlier in the offseason, he stated he wanted to give up No. 7 in honor of Jose Reyes. That offseason, he also hired Nikki Huffman as his personal trainer, away from the Toronto Blue Jays where she served as head trainer. He first met her in 2015 at Duke University where she helped him recover from a torn ACL ahead of schedule. Stroman missed the beginning of the 2020 season with a torn left calf muscle. On August 10, 2020, before his return, he announced he would opt out of the season.

On January 9, 2015, Stroman completed the legal process for trademarking "Height Doesn't Measure Heart" and "HDMH". Since mid-2015, he has produced caps with New Era that feature his trademarks. He has also partnered with Nike, Jordan Brand, BioSteel, and Rogers to create apparel featuring the HDMH logo. Stroman stated in December 2016 that he measured exactly 5' 7.25" for a physical examination for Nike.

On March 23, 2016, Stroman was named the Opening Day starter for the Blue Jays. He pitched into the ninth inning, holding the Tampa Bay Rays to three runs on six hits, while striking out 5 in a 5–3 win. Stroman established a new career-high in strikeouts, with 9, in a 5–1 win over the Rays on May 1. He also set a Blue Jays franchise-record for strikeouts on a pitcher's birthday, surpassing David Price, Marc Rzepczynski, and Roy Halladay, who each had 8 strikeouts in starts on their birthdays. Stroman improved on his single-game strikeout record on August 1, when he struck out 13 Houston Astros batters in a no-decision. He finished the 2016 regular season with a 9–10 record, 4.37 ERA, and 166 strikeouts over a career-high 204 innings pitched. He had the highest ground ball percentage among major league pitchers (60.1%), and the lowest fly ball percentage (20.4%).

On May 15, 2016, Stroman graduated from Duke University with a bachelor's degree in sociology.

In December 2016, Stroman announced that he would play for the United States national baseball team at the 2017 World Baseball Classic. He made three starts for the team, and posted a 2.35 ERA in 151⁄3 total innings. In the final game, Stroman held Team Puerto Rico scoreless and without a hit through six innings, leading Team USA to an 8–0 victory and their first WBC championship. Following the game, Stroman was named the tournament's most valuable player (MVP). He was also named to the All-World Baseball Classic team.

Stroman finished the 2017 season with 13 wins, 164 strikeouts, and a 3.09 ERA in 201 innings. By passing the 200-inning mark, he became the seventh Blue Jays pitcher in the prior 20 years to have consecutive 200-inning seasons. He again had the highest ground ball percentage among major league pitchers (62.1%), and the lowest fly ball percentage (19.7%). He gave up the longest home run of all major league pitchers in 2017, at 496 feet.

On February 15, 2018, Stroman announced through his Twitter account that he had lost his arbitration case and would make $6.5 million for the season instead of his requested salary of $6.9 million. Stroman struggled to start the 2018 season, going 0–5 with a 7.71 ERA before being placed on the 10-day disabled list due to right shoulder fatigue on May 11. On June 13, he made his High-A debut with the Dunedin Blue Jays and pitched 41⁄3 innings in a rehab start, surrendering two runs on one hit while walking four and striking out three. Stroman returned to Toronto's rotation on June 23, pitching five shutout innings against the Los Angeles Angels. Later in the season, Stroman was forced to leave starts on August 7 and 17 against the Boston Red Sox and New York Yankees, respectively due to blisters in his pitching hand. He would return again on September 3 to start against the Tampa Bay Rays, however, blisters again forced him out of the game. Stroman would not return again in 2018 after this start, ending his 2018 season with a 4–9 record and a 5.54 ERA in 19 starts.

On July 28, 2019, the Toronto Blue Jays traded Stroman (along with cash considerations) to the New York Mets for pitching prospects Anthony Kay and Simeon Woods Richardson. In 11 starts with the Mets in 2019, Stroman was 4–2 with a 3.77 ERA and 60 strikeouts. He finished 10–13 with a 3.22 ERA overall between the Blue Jays & Mets.

On March 13, 2019, Stroman was announced as the Opening Day starter by Blue Jays manager Charlie Montoyo. On June 30, Stroman was named to the 2019 MLB All-Star Game, his first all-star nomination of his career.

On December 1, 2021, Stroman signed a three-year contract worth $71 million to play for the Chicago Cubs. He is the first ever Cub to wear the number 0 on a Cubs jersey.