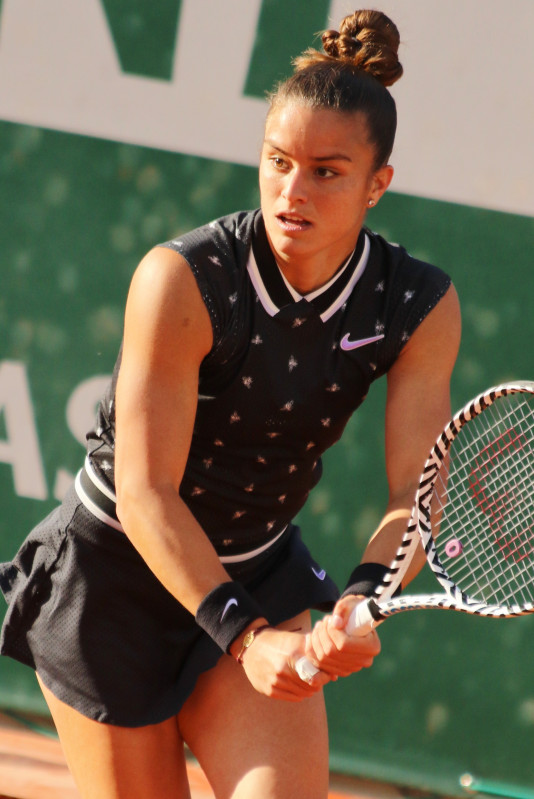 Sakkari was born on 25 July 1995 to mother Angelikí Kanellopoúlou who is former top-50 tennis player and father Konstantinos Sakkaris, in the capital of Greece, Athens. She has two siblings: brother Yannis and sister Amanda. She was introduced by her parents to tennis at age 6 and moved to Barcelona at age 18 in order to train. She has said that her favorite surfaces are hard and clay and that her favorite shot is the serve. Growing up, her favourite players were Serena Williams, Roger Federer and Rafael Nadal. Sakkari currently resides in Monte Carlo.

Sakkari got through qualifying for Wimbledon and won her first match at that tournament, defeating Zheng Saisai, but then lost in the second round to five-time former Wimbledon champion, Venus Williams. After this result, on July 11, 2016, she reached 97 in the rankings.

At the US Open, she reached the same stage as she did at the Australian Open and Wimbledon, making the third round for the third time. In the first two rounds, she defeated Kiki Bertens and Arina Rodionova, but was eliminated by Venus Williams in the third round. She reached her first WTA Tour semifinal at the Wuhan Open by beating Caroline Wozniacki, Elena Vesnina and Alizé Cornet, but then missed her chance to reach her first WTA final, losing to Caroline Garcia. This success propelled her into the top 50 of the WTA rankings, reaching No. 50, on 2 October 2017. Her last tournament of the season was the Tianjin Open, where Christina McHale eliminated her in the second round.

At the Korea Open, Sakkari made her first WTA semifinal, defeating Anna Karolína Schmiedlová, Margarita Gasparyan and Irina-Camelia Begu, respectively, in first three rounds, before she was defeated by Kiki Bertens in the semifinal. At both the Wuhan Open and China Open, Sakkari failed in the first rounds, losing to Wang Qiang and Donna Vekić, respectively. In her last two tournaments in 2018, Tianjin Open and Luxembourg Open, Sakkari failed in the first round. She finished the year inside the top 50, reaching No. 41.

Sakkari started her clay-court season by reaching her first semifinal in 2018 in (Istanbul) where she beat Çağla Büyükakçay, Aleksandra Krunić and Arantxa Rus, respectively, before losing to Polona Hercog. She then lost in the first round of the Madrid Open to Kiki Bertens. Her next tournament was the Italian Open, where she avenged her Madrid exit by beating Bertens in the first round, and then had her second win against a top-ten player by beating Karolína Plíšková. She lost in the third round to Angelique Kerber. At the French Open, she reached the third round, after defeating Mandy Minella and Carla Suárez Navarro and then she completed third rounds at all Grand Slam tournaments. In the third round, she lost to 14th seed Daria Kasatkina.

Sakkari is known for her aggressive, all-court style of play, centered around her strong serve and powerful groundstrokes. Sakkari served the sixth most aces of any WTA player in 2020, with 144 aces served in 31 matches.