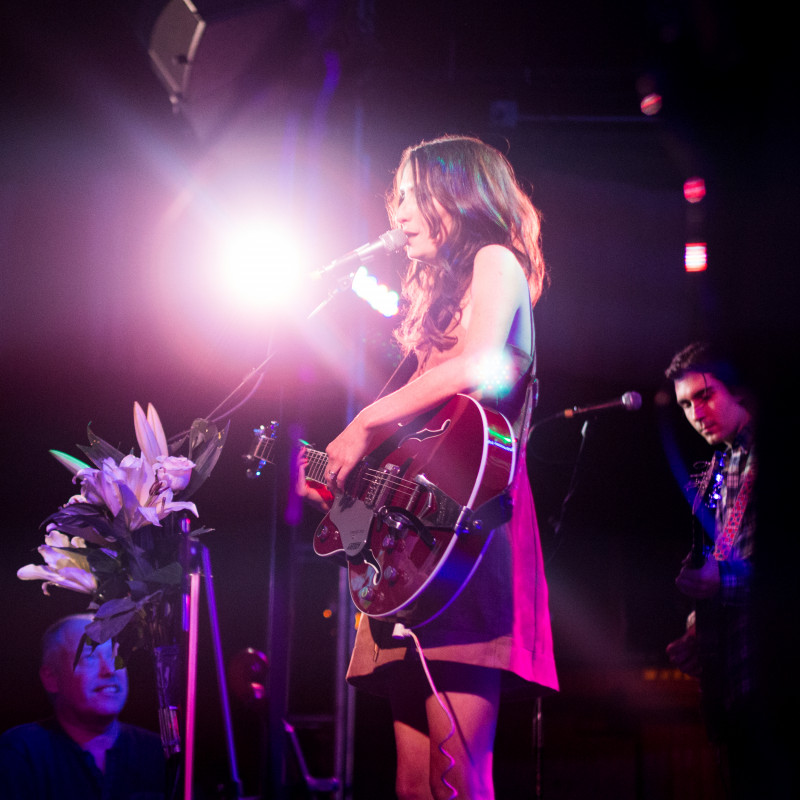 Maria Diane Taylor (born May 21, 1976) is an American singer-songwriter from Birmingham, Alabama. She is also a member of the duo Azure Ray with Orenda Fink. Taylor plays several instruments, including the piano, guitar, and drums, and has collaborated or performed with such artists as Bright Eyes, Moby, Michael Stipe of R.E.M., Joshua Radin, Nik Freitas and more.

Taylor later moved to Athens, Georgia along with her musical collaborator, Fink where they formed the band Azure Ray. The pair signed to WARM and released their self-titled debut in 2001. The song "Sleep" was later featured in the 2006 Academy Award-nominated movie, The Devil Wears Prada featuring Anne Hathaway. In 2015, Taylor Swift included "Sleep" in a 6-song "breakup playlist" made for a fan via her official Tumblr. Azure Ray released their second album, Burn and Shiver in 2002. Eric Bachmann (Crooked Fingers and Archers of Loaf) produced both records. After meeting the band in Athens, Bright Eyes frontman Conor Oberst invited the band on tour and introduced them to Saddle Creek. Saddle Creek released their following records, November EP, and The Drinks We Drank Last Night. In 2002, the duo co-wrote and recorded "The Great Escape" (which appeared on Moby's 18) and "Landing" (which appeared on the XXX soundtrack), and afterwards joined Moby on tour. Following the release of 2003's Hold on Love, Taylor and Fink began a 6-year hiatus.

Taylor released her first solo album 11:11 on Saddle Creek Records on May 24, 2005. The album features Conor Oberst of Bright Eyes, Gretta Cohn of Cursive, Andy LeMaster and Mike Mogis as both musicians and producers. Grey's Anatomy named its March 31, 2011, episode, "Song Beneath the Song", after a track from the album and also featured the song on the original soundtrack. Taylor later recorded a new song for Grey's Anatomy's 2005 Christmas episode entitled "Christmas After All." Her second solo album, Lynn Teeter Flower, was released on March 6, 2007, also on Saddle Creek. "A Good Start," the first track off Lynn Teeter Flower, was subsequently named one of NPR's 10 best songs of the year for 2007. "The Ballad of Sean Foley" was co-written with Conor Oberst. The following year she released an acoustic album titled Savannah Drive with Andy LeMaster which includes stripped-down versions of songs from her first two albums, plus one new track, "Tell Me." On March 31, 2009, she released her third full length, LadyLuck via Nettwerk Music Group featuring the song "Cartoons and Forever Plans," co-written by and including guest vocals from R.E.M.'s Michael Stipe. LadyLuck reached number 48 on Billboard's "Heatseakers" charts.

Azure Ray then reunited for a one-off reunion show in December 2008 at Los Angeles's iconic Troubadour. In 2010, they released their first album in six years, Drawing Down the Moon.

Overlook, Taylor's 4th solo album, was released August 16, 2011. After moving back to her hometown of Birmingham, Taylor was unable to write for nearly a year, eventually composing the entire album over two weeks during a break in touring with Azure Ray. This release marks the first time Taylor produced her own album. Paste called Overlook "her best, most animated collection in years."

After moving back to Los Angeles, Taylor wrote and recorded In the Next Life, released December 9, 2016, on her own label, Flower Moon Records. The album features guest appearances from familiar collaborators Joshua Radin, Conor Oberst and more. "If Only" (featuring Oberst) was prominently featured in NBC's This Is Us. NPR, who premiered the full album stream, called it "her warmest and most affecting album... filled with gorgeous, touching songs about family, legacy, fear and the pursuit of contentment."

In November 2017, Taylor joined Ben Lee, Mike Watt, Joey Waronker and others as Daniel Johnston's backing band during the Los Angeles stop of his final tour. That same month, Azure Ray announced they would once again reunite for a one-off show in Los Angeles at the Lodge Room on January 20, 2018.

Taylor performed on The Ellen Show with Joshua Radin during his performance of "Here, Right Now" in October 2019. On November 11, 2019, Taylor released her new self-titled album on Flower Moon Records. Flood Magazine premiered the single "Waiting in Line" featuring the Counting Crows' Adam Duritz on October 24, 2019. Under the Radar premiered the Alan Tanner directed video for "Spinning Wheel" on January 22, 2020.