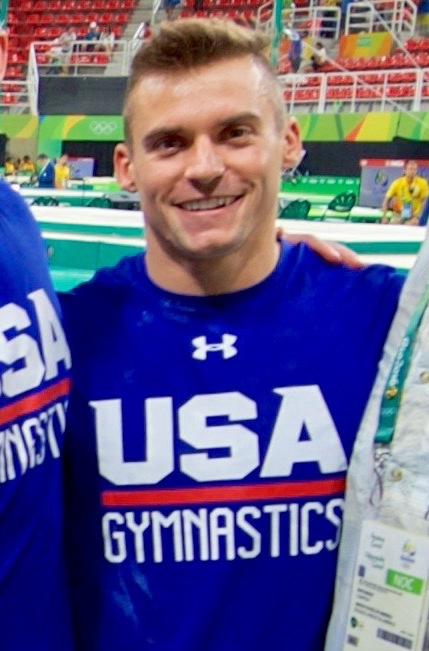 In October, Mikulak competed at the 2018 World Championships in Doha, Qatar. He and the U.S. team finished fourth in the team competition. He qualified for the individual all-around final in third place, and also for four event finals. Mikulak is the first U.S. man since Kurt Thomas in 1979 to qualify for that many event finals at one World Championships. In the individual all-around final, he had strong competition and was in third place heading into the last event, high bar, where a costly error left him in fifth place. This result was the best finish at Worlds by a U.S. man since 2011. In the individual event finals, Mikulak broke through and won his first World individual event medal, a bronze on high bar. Before the high bar final, he had placed seventh on floor exercise, and fourth on pommel horse and parallel bars.

Mikulak enrolled at the University of Michigan where he was a member of the Michigan Wolverines men's gymnastics team from 2010 to 2014. As the anchor of the team, he led Michigan to the NCAA team title in 2013 and 2014. As a freshman at the 2011 NCAA Men's Gymnastics Championships, he won the individual all-around title with a career-high score of 90.75. As a sophomore in 2012, he won the Big Ten Conference title on high bar and pommel horse and placed second in the all-around. Later that year, Mikulak became the first male gymnast from the University of Michigan to qualify for the Olympics. At the 2013 NCAA Championships, Mikulak won the all-around, parallel bars, and high bar titles. At the 2014 NCAA Championships, he won the all-around and parallel bars titles. He was named undergraduate assistant coach for the University of Michigan men's team in August 2014.

On July 11, 2015, Mikulak led the U.S. men's gymnastics team to their first gold medal at the Pan-American Games in twenty years. Two days later, he was crowned Pan American champion in the all-around final.

On August 16, 2015, Mikulak won his third consecutive national all-around title at the 2015 U.S. National Championships in Indianapolis. He also won the gold medal on vault and parallel bars and won the bronze medal on pommel horse and high bar. Due to a partially torn achilles tendon injury, he was unable to participate at the 2015 World Championships in Glasgow, Scotland.

On December 17, 2015, Mikulak and two-time World medalist Donnell Whittenburg accepted invitations to represent the U.S. at the 2016 American Cup in Newark, New Jersey, on March 5, 2016.

On February 21, 2016, Mikulak won the all-around title at the 2016 Winter Cup in Las Vegas, with a two-day score of 177.50. He outscored the second place finisher, Akash Modi, by over two points. In March, Mikulak finished fourth at the American Cup, his first international competition since recovering from a torn achilles tendon. In April, he competed at the 2016 Pacific Rim Championships and won the gold medal with the U.S. team in the team event. He also won the bronze medal in the all-around and the silver medal on the pommel horse.

Mikulak claimed his fourth consecutive national all-around title on June 5, 2016 at the 2016 U.S. National Championships in Hartford, Connecticut. He outscored Chris Brooks 181.500 to 179.850 to become the first male gymnast to win four consecutive national titles since Blaine Wilson won five titles in a row from 1996 to 2000.

On June 25, 2016, Mikulak placed first at the 2016 U.S. Olympic Trials in St. Louis, Missouri, and qualified for his second Olympic team. He was named to the five-man U.S. Olympic men's gymnastics team along with Chris Brooks, John Orozco (who was replaced by Danell Leyva due to injury), Jake Dalton, and Alex Naddour. Mikulak was one of three gymnasts who train at the U.S. Olympic Training Center in Colorado Springs, Colorado, to qualify for the Olympic men's gymnastics team.

In August, Mikulak won his fifth national all-around title in dominant fashion at the 2018 U.S. National Championships in Boston. After a somewhat shaky performance on Day 1 that included falls on pommel horse and high bar, he came back with a very strong outing on Day 2 and won the gold medal easily. His margin of victory was the largest of any of his national titles at the time (he would extend this record in 2019). He also won the gold medal on floor exercise, parallel bars and high bar. Mikulak is the first male gymnast to win five U.S. national titles since Blaine Wilson won five straight crowns from 1996 to 2000.

In 2021, Mikulak started speaking out about his experiences with mental illness as an athlete. In May, he spoke at a USA Gymnastics athlete-driven panel about mental health. Mikulak described feeling overwhelmed by his focus on gymnastics during the 2016 Olympics cycle, including during the Olympic Floor Exercise finals: Mikulak had posted the highest qualifying score in the field, but he did not win a medal in the event finals, even though several other contenders had made errors. Mikulak also described his struggles with depression after the postponement of the 2020 Summer Olympics. Mikulak called the 2020 games the most "meaningful" and the "hardest" Olympics to qualify for in his career. He spoke about redefining his identity beyond only being a gymnast.