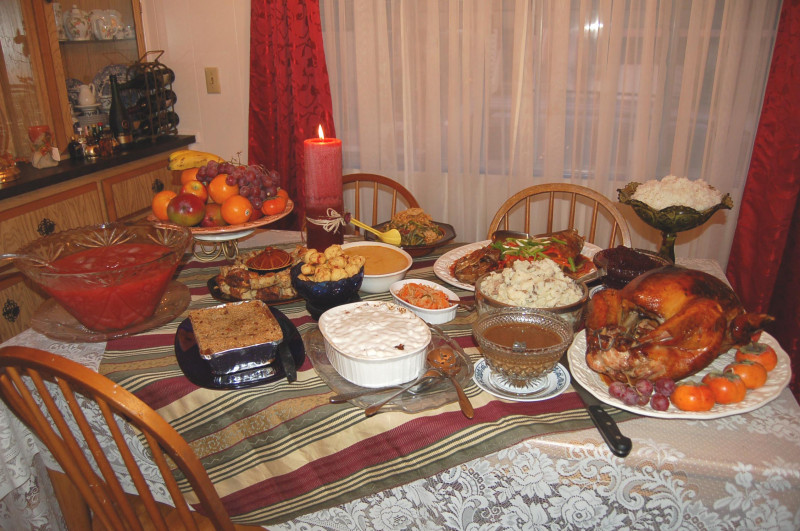 Other claims include an earlier religious service by Spanish explorers in Texas at San Elizario in 1598. Historians Robyn Gioia and Michael Gannon of the University of Florida argue that the earliest Thanksgiving service in what is now the United States was celebrated by the Spanish community on September 8, 1565, in current Saint Augustine, Florida.

Several days of Thanksgiving were held in early New England history that have been identified as the "First Thanksgiving", including Pilgrim holidays in Plymouth in 1621 and 1623, and a Puritan holiday in Boston in 1631. According to historian Jeremy Bangs, director of the Leiden American Pilgrim Museum, the Pilgrims may have been influenced by watching the annual services of Thanksgiving for the relief of the siege of Leiden in 1574, while they were staying in Leiden. Now called 3 Oktoberfeest, Leiden's autumn thanksgiving celebration in 1617 was the occasion for sectarian disturbance that appears to have accelerated the pilgrims' plans to emigrate to America.

Special blessings, viewed as coming from God, called for Days of Thanksgiving, which were observed through Christian church services and other gatherings. For example, Days of thanksgiving were called following the victory over the Spanish Armada in 1588 and following the deliverance of Queen Anne in 1605. An unusual annual Day of Thanksgiving began in 1606 following the failure of the Gunpowder Plot in 1605 and developed into Guy Fawkes Day on November 5. Days of Fasting were called on account of plagues in 1604 and 1622, drought in 1611, and floods in 1613. Annual Thanksgiving prayers were dictated by the charter of English settlers upon their safe landing in America in 1619 at Berkeley Hundred in Virginia.

The annual Thanksgiving holiday tradition in the United States is documented for the first time in 1619, in what is now called the Commonwealth of Virginia. Thirty-eight English settlers aboard the ship Margaret arrived by way of the James River at Berkeley Hundred in Charles City County, Virginia on December 4, 1619. The landing was immediately followed by a religious celebration, specifically dictated by the group's charter from the London Company. The charter declared, "that the day of our ships arrival at the place assigned for plantation in the land of Virginia shall be yearly and perpetually kept holy as a day of thanksgiving to Almighty God." Since the mid 20th century, the original celebration has been commemorated there annually at present-day Berkeley Plantation, ancestral home of the Harrison family of Virginia.

Later in New England, religious thanksgiving services were declared by civil leaders such as Governor Bradford, who planned the Plymouth colony's thanksgiving celebration and feast in 1623. Bradford issued a proclamation of Thanksgiving following victory in the Pequot War in the late 1630s to celebrate "the bloody victory, thanking God that the battle had been won." The practice of holding an annual harvest festival did not become a regular affair in New England until the late 1660s.

Thanksgiving proclamations were made mostly by church leaders in New England up until 1682, and then by both state and church leaders until after the American Revolution. During the revolutionary period, political influences affected the issuance of Thanksgiving proclamations. Various proclamations were made by royal governors, and conversely by patriot leaders, such as John Hancock, General George Washington, and the Continental Congress, each giving thanks to God for events favorable to their causes. As President of the United States, George Washington proclaimed the first nationwide thanksgiving celebration in America marking November 26, 1789, "as a day of public thanksgiving and prayer, to be observed by acknowledging with grateful hearts the many and signal favours of Almighty God", and calling on Americans to "unite in most humbly offering our prayers and supplications to the great Lord and Ruler of Nations and beseech him to pardon our national and other transgressions."

In the West African country of Liberia, Thanksgiving is celebrated on the first Thursday of November. In 1883, the Legislature of Liberia enacted a statute declaring this day as a national holiday. Thanksgiving is celebrated in the country in large part due to the nation's founding as a colony of the American Colonization Society in 1821 by former slaves and free people of color from the United States. However, the Liberian celebration of the holiday is notably different from the American celebration. While some Liberian families chose to celebrate with a feast or cook out, it is not considered a staple of the holiday and there is no specific food heavily associated with Thanksgiving. Some chose to celebrate the holiday by attending religious ceremonies, while others take it as a day for relaxation. Others view the holiday as an imposition from the American settlers of the country. In the years following the second civil war, some Liberians have taken the holiday as a time to be thankful for this new period peace and relative stability.

Thanksgiving in the United States has been observed on differing dates. From the time of the Founding Fathers until the time of Lincoln, the date of observance varied from state to state. The final Thursday in November had become the customary date in most U.S. states by the beginning of the 19th century, coinciding with, and eventually superseding the holiday of Evacuation Day (commemorating the day the British exited the United States after the Revolutionary War). Modern Thanksgiving was proclaimed for all states in 1863 by Abraham Lincoln. Influenced by Sarah Josepha Hale, who wrote letters to politicians for approximately 40 years advocating an official holiday, Lincoln set national Thanksgiving by proclamation for the final Thursday in November in celebration of the bounties that had continued to fall on the Union and for the military successes in the war, also calling on the American people, "with humble penitence for our national perverseness and disobedience .. fervently implore the interposition of the Almighty hand to heal the wounds of the nation..." Because of the ongoing Civil War, a nationwide Thanksgiving celebration was not realized until Reconstruction was completed in the 1870s.

The earlier Thanksgiving celebrations in Canada has been attributed to the earlier onset of winter in the North, thus ending the harvest season earlier. Thanksgiving in Canada did not have a fixed date until the late 19th century. Prior to Canadian Confederation, many of the individual colonial governors of the Canadian provinces had declared their own days of Thanksgiving. The first official Canadian Thanksgiving occurred on April 15, 1872, when the nation was celebrating the Prince of Wales' recovery from a serious illness.

In Brazil, National Thanksgiving Day was instituted by President Gaspar Dutra, through Law 781 of August 17, 1949, at the suggestion of Ambassador Joaquim Nabuco, who was enthusiastic about the commemorations he saw in 1909 in St. Patrick's Cathedral as an ambassador in Washington. In 1966, Law 5110 established that the Thanksgiving celebration would take place on the fourth Thursday of November. This date is celebrated by many families of American origin, by some Protestant Christian denominations, such as the Evangelical Lutheran Church of Brazil (which is of American origin), the Presbyterian Church, the Baptist Church, the Methodist Church, and the Church of the Nazarene, and Methodist denominational universities. The day is also celebrated by evangelical churches such as the Foursquare Gospel Church in Brazil.

On October 31, 1939, President Franklin D. Roosevelt signed a presidential proclamation changing the holiday to the next to last Thursday in November in an effort to boost the economy. The earlier date created an extra seven days for Christmas shopping since at that time retailers never began promoting the Christmas season until after Thanksgiving. But making the proclamation so close to the change wreaked havoc on the holiday schedules of many people, schools, and businesses, and most Americans were not in favor of the change. Some of those who opposed dubbed the holiday "Franksgiving" that year. Some state governors went along with the change while others stuck with the original November 30 date for the holiday, and three states — Colorado, Mississippi, and Texas — observed both dates. The double Thanksgiving continued for two more years, and then on December 26, 1941, Roosevelt signed a joint resolution of Congress changing the official national Thanksgiving Day to the fourth Thursday in November starting in 1942.

The Philippines, while it was an American colony in the first half of the 20th century, celebrated Thanksgiving as a special public holiday on the same day as the Americans. During the Japanese occupation during World War II, both the Americans and Filipinos celebrated Thanksgiving in secret. After Japanese withdrawal in 1945, the tradition continued until 1969. It was revived by President Ferdinand Marcos, but the date was changed to be on every September 21, when martial law was imposed in the country. After Marcos' ouster in 1986, the tradition was no longer continued, due to the controversial events that occurred during his long administration.

By the end of the 19th century, Thanksgiving Day was normally celebrated on November 6. In the late 19th century, the Militia staged "sham battles" for public entertainment on Thanksgiving Day. The Militia agitated for an earlier date for the holiday, so they could use the warmer weather to draw bigger crowds. However, when the First World War ended, the Armistice Day holiday was usually held during the same week. To prevent the two holidays from clashing with one another, in 1957 the Canadian Parliament proclaimed Thanksgiving to be observed on its present date on the second Monday of October.

In 1963, President John F. Kennedy acknowledged both the Virginia and Massachusetts claims. Kennedy issued Proclamation 3560 on November 5, 1963, stating, "Over three centuries ago, our forefathers in Virginia and in Massachusetts, far from home in a lonely wilderness, set aside a time of thanksgiving. On the appointed day, they gave reverent thanks for their safety, for the health of their children, for the fertility of their fields, for the love which bound them together, and for the faith which united them with their God."

In the West Indian island of Grenada, in the Caribbean, there is a national holiday known as Thanksgiving Day which is celebrated on October 25. Even though it bears the same name, and is celebrated at roughly the same time as the American and Canadian versions of Thanksgiving, this holiday is unrelated to either of those celebrations. Instead, the holiday marks the anniversary of the U.S.-led invasion of the island in 1983, in response to the deposition and execution of the socialist Grenadian Prime Minister Maurice Bishop by a military government from within his own party.