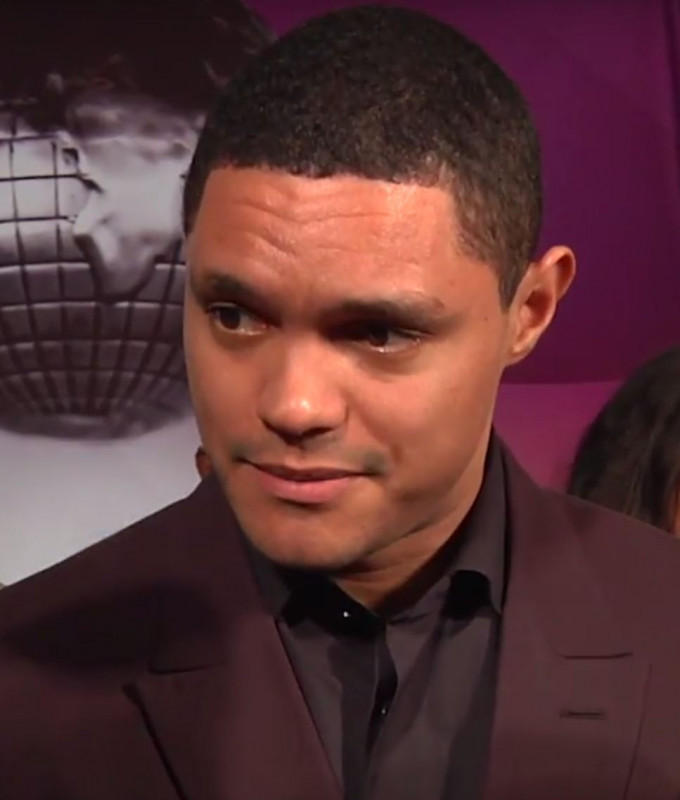 Trevor Noah (born 20 February 1984) is a South African comedian, writer, producer, political commentator, actor, and television host. He is the host of The Daily Show, an American late-night talk show and satirical news program on Comedy Central. Noah has won various awards, including a Primetime Emmy Award from eleven nominations. He was named one of "The 35 Most Powerful People in New York Media" by The Hollywood Reporter in 2017 and 2018. In 2018, Time magazine named him one of the hundred most influential people in the world.

Trevor Noah was born on 20 February 1984, in Johannesburg, Gauteng, South Africa. His father, Robert, is of Swiss-German ancestry, and his mother, Patricia Nombuyiselo Noah, is Xhosa.

Under apartheid legislation, Noah's mother was classified as Black, and his father was classified as White. Noah himself was classified as Coloured. At the time of his birth, his parents' interracial relationship was illegal, which Noah highlights in his autobiography. Interracial sexual relations and marriages were not decriminalized until a year after his birth, when the Immorality Act was amended in 1985. Patricia and her mother, Nomalizo Frances Noah, raised Trevor in the black township of Soweto. Noah began his schooling at Maryvale College, a private Roman Catholic primary and high school in Maryvale, Gauteng, a suburb of Johannesburg.

In 1992, Noah's mother, Patricia Nombuyiselo, married Ngisaveni Abel Shingange; they had two sons together, Andrew and Isaac. Shingange physically abused both Trevor and his mother, and the couple legally divorced in 1996. In 2009, after Patricia married Sfiso Khoza, Shingange shot her in the leg and through the back of her head; she survived as the bullet went through the base of her head, avoiding the spinal cord, brain, and all major nerves and blood vessels, then exiting with minor damage to her nostril. When Noah confronted him over the phone about the shooting, Shingange threatened his life, prompting Noah to leave Johannesburg for Los Angeles.

Born in Johannesburg, Noah began his career in South Africa in 2002. He had several hosting roles with the South African Broadcasting Corporation (SABC) and was the runner-up in the fourth season of South Africa's iteration of Strictly Come Dancing in 2008. From 2010 to 2011, he hosted the late-night talk show Tonight with Trevor Noah, which he created and aired on M-Net and DStv.

In 2002, Noah had a small role on an episode of the South African soap opera Isidingo. He later hosted his own radio show Noah's Ark on Gauteng's leading youth-radio station, YFM. He dropped his radio show and acting to focus on comedy, and has performed with South African comedians such as: David Kau, Kagiso Lediga, Riaad Moosa, Darren Simpson, Marc Lottering, Barry Hilton, and Nik Rabinowitz, international comedians such as Paul Rodriguez, Carl Barron, Dan Ilic, and Paul Zerdin, and as the opening act for American comedian Gabriel Iglesias in November 2007 and Canadian comedian Russell Peters on his South African tour.

Noah hosted an educational TV programme, Run the Adventure (2004–2006) on SABC 2. In 2007, he hosted The Real Goboza, a gossip-themed show on SABC 1, and Siyadlala, a sports show also on the SABC. In 2008, Noah cohosted, alongside Pabi Moloi, The Amazing Date (a dating gameshow) and was a Strictly Come Dancing contestant in the fourth series. In 2009, he hosted the 3rd Annual South Africa Film and Television Awards (SAFTAs) and co-hosted alongside Eugene Khoza on The Axe Sweet Life, a reality competition series. In 2010, Noah hosted the 16th annual South African Music Awards and also hosted Tonight with Trevor Noah on MNet (for the second series, it moved to DStv's Mzansi Magic Channel). In 2010, Noah also became a spokesperson and consumer protection agent for Cell C, South Africa's third-largest mobile phone network provider.

In 2011, Shingange was convicted of attempted murder and sentenced the following year to three years of correctional supervision. Noah stated that he hoped the attention surrounding the incident would raise awareness of the broader issue of domestic violence in South Africa: "For years my mother reached out to police for help with domestic abuse, and nothing was ever done. This is the norm in South Africa. Dockets went missing and cases never went to court."

In 2011, he relocated to the United States. In January 2012, Noah became the first South African stand-up comedian to appear on The Tonight Show; and in May 2013, he became the first to appear on Late Show with David Letterman. Noah was the subject of the 2012 documentary You Laugh But It's True. The same year, he starred in the one-man comedy show Trevor Noah: The Racist, which was based on his similarly titled South African special That's Racist. In September 2012, Noah was the Roastmaster in a Comedy Central Roast of South African Afrikaans singer Steve Hofmeyr. In 2013, he performed the comedy special Trevor Noah: African American. In October 2013, he was a guest on BBC Two's comedy panel show QI. In November 2013, he was a panelist on Channel 4 game show 8 Out of 10 Cats and appeared on Sean Lock's team in 8 Out of 10 Cats Does Countdown in September 2014.

In December 2014, Noah became a recurring contributor on The Daily Show. In March 2015, Comedy Central announced that Noah would succeed Jon Stewart as host of The Daily Show; his tenure began on 28 September 2015.

His memoir Born a Crime was published in November 2016 and was received favorably by major U.S. book reviewers. Other than the author, his mother has a central role in the book, while his European father is mentioned only occasionally. It became a No. 1 New York Times Bestseller and was named one of the best books of the year by The New York Times, Newsday, Esquire, NPR, and Booklist. It was announced that a film adaptation based on the book would star Lupita Nyong'o as his mother.

In 2017, he made an appearance on the TV series Nashville. In 2018, he appeared in Black Panther, Coming 2 America, and American Vandal.

In April 2017, Noah began developing a talk show for Jordan Klepper: The Opposition with Jordan Klepper, which premiered in September, and ran for one season. Noah also executive-produced Klepper, a primetime weekly docuseries, beginning in May 2019. In March 2018, Noah signed a multiyear contract with Viacom giving them first-look rights to any future projects by him. In addition to the deal, Noah would also be launching an international production and distribution company called Day Zero Productions.

In April 2018, Noah launched The Trevor Noah Foundation, a youth development initiative that empowers youth with the foundation for a better life: access to high-quality education. Noah's vision is a world where an education enables youth to dream, see and build the impossible.

In addition to hosting The Daily Show, Noah has hosted the Grammy Awards twice in 2021 and 2022. He also served as host of the White House Correspondents' Dinner in 2022.

Noah was selected as the Class Day speaker for Princeton University's Class of 2021. He gave his address virtually on 15 May 2021, and was inducted as an honorary member of the Class of 2021.

On 29 September 2022, Noah requested some extra minutes during that night's program and announced that he would be leaving The Daily Show at an undetermined future date after hosting the show for seven years. After revisiting stand-up comedy, he felt a longing to return to visiting countries for shows, learning new languages and "being everywhere, doing everything". It was confirmed the following month that Noah's last show would be on Thursday, December 8, 2022.

In October 2022, after Rishi Sunak became Prime Minister of the United Kingdom, Noah claimed that there was a racist backlash in the U.K. against someone of Indian heritage taking that role. British Conservative politician Sajid Javid described Noah's remarks as "A narrative catered to his audience, at a cost of being completely detached from reality." There were suggestions that Noah was projecting the U.S. political context onto the U.K.—English author Tom Holland stated: "As ever, the inability of American liberals to understand the world beyond the US in anything but American terms is a thing of wonder." Sunak's spokesperson insisted, in response to Noah's claims, that the U.K. is not a racist country; Noah stated that he never made a statement about the country as a whole, only about "some people".