Turkey in the Straw 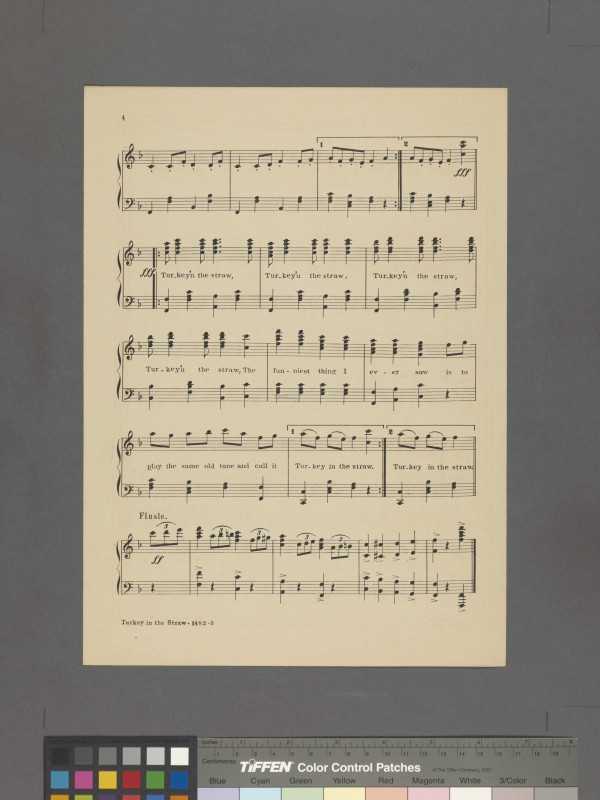 Another version is called "Natchez Under the Hill". The lyrics are thought to have been added to an earlier tune by Bob Farrell who first performed them in a blackface act on August 11, 1834.

In 1942, a soundie titled, "Turkey in the Straw" was created by Freddie Fisher and The Schnickelfritz Band. (Directed by Sam Coslow and Produced by Josef Berne). There are two versions to the chorus that are sung. The first goes:

In June 2020, Good Humor, purveyors of frozen dessert, posted information via social media about the racist history of ice-cream truck jingles such as, “Turkey in the Straw”. The tune has been playing from the speakers of ice-cream trucks nationwide for generations. In the early 1800s, the melody was attributed to the denigrating song, “Zip Coon”, written by minstrel performer George Washington Dixon. The "Zip Coon" was a blackface character who parodied a free black man attempting to conform to white high society. The song’s artwork and sheet music are archived at the Library of Congress. The racist evolution of the tune continued with the 1916 release of the song, “Nigger Love A Watermelon Ha! Ha! Ha!” through Columbia Records. The song was written by actor Harry C. Browne and played on the stereotypical depiction of african descendants’ supposed knack for watermelon. This song was also written to the melody of “Turkey in the Straw” and became nationally famous by way of traveling blackface minstrel acts.

As of August 2020, Good Humor and Wu-Tang Clan's RZA announced their collaboration to create a new tune for ice-cream trucks. With the endeavor, Good Humor and RZA aim to help drivers learn about the racist roots of "Turkey in the Straw" and how to replace the music box in the truck that plays it. The song is scheduled for release before September 2020.