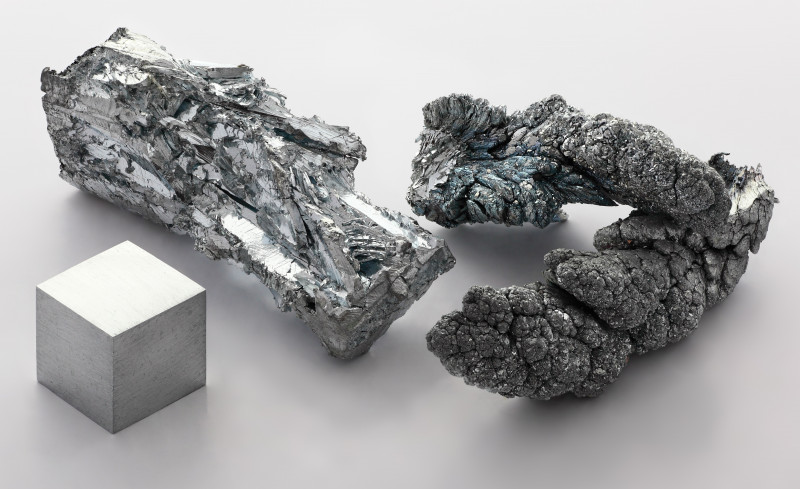 German metallurgist Andreas Libavius received a quantity of what he called "calay" of Malabar from a cargo ship captured from the Portuguese in 1596. Libavius described the properties of the sample, which may have been zinc. Zinc was regularly imported to Europe from the Orient in the 17th and early 18th centuries, but was at times very expensive.

Flemish metallurgist and alchemist P. M. de Respour reported that he had extracted metallic zinc from zinc oxide in 1668. By the start of the 18th century, Étienne François Geoffroy described how zinc oxide condenses as yellow crystals on bars of iron placed above zinc ore that is being smelted. In Britain, John Lane is said to have carried out experiments to smelt zinc, probably at Landore, prior to his bankruptcy in 1726.

In 1738 in Great Britain, William Champion patented a process to extract zinc from calamine in a vertical retort-style smelter. His technique resembled that used at Zawar zinc mines in Rajasthan, but no evidence suggests he visited the Orient. Champion's process was used through 1851.

The element was probably named by the alchemist Paracelsus after the German word Zinke (prong, tooth). German chemist Andreas Sigismund Marggraf is credited with discovering pure metallic zinc in 1746. Work by Luigi Galvani and Alessandro Volta uncovered the electrochemical properties of zinc by 1800. Corrosion-resistant zinc plating of iron (hot-dip galvanizing) is the major application for zinc. Other applications are in electrical batteries, small non-structural castings, and alloys such as brass. A variety of zinc compounds are commonly used, such as zinc carbonate and zinc gluconate (as dietary supplements), zinc chloride (in deodorants), zinc pyrithione (anti-dandruff shampoos), zinc sulfide (in luminescent paints), and dimethylzinc or diethylzinc in the organic laboratory.

William Champion's brother, John, patented a process in 1758 for calcining zinc sulfide into an oxide usable in the retort process. Prior to this, only calamine could be used to produce zinc. In 1798, Johann Christian Ruberg improved on the smelting process by building the first horizontal retort smelter. Jean-Jacques Daniel Dony built a different kind of horizontal zinc smelter in Belgium that processed even more zinc. Italian doctor Luigi Galvani discovered in 1780 that connecting the spinal cord of a freshly dissected frog to an iron rail attached by a brass hook caused the frog's leg to twitch. He incorrectly thought he had discovered an ability of nerves and muscles to create electricity and called the effect "animal electricity". The galvanic cell and the process of galvanization were both named for Luigi Galvani, and his discoveries paved the way for electrical batteries, galvanization, and cathodic protection.

Galvani's friend, Alessandro Volta, continued researching the effect and invented the Voltaic pile in 1800. Volta's pile consisted of a stack of simplified galvanic cells, each being one plate of copper and one of zinc connected by an electrolyte. By stacking these units in series, the Voltaic pile (or "battery") as a whole had a higher voltage, which could be used more easily than single cells. Electricity is produced because the Volta potential between the two metal plates makes electrons flow from the zinc to the copper and corrode the zinc.

Organozinc compounds are those that contain zinc–carbon covalent bonds. Diethylzinc ((C 2H5) 2Zn) is a reagent in synthetic chemistry. It was first reported in 1848 from the reaction of zinc and ethyl iodide, and was the first compound known to contain a metal–carbon sigma bond.

The non-magnetic character of zinc and its lack of color in solution delayed discovery of its importance to biochemistry and nutrition. This changed in 1940 when carbonic anhydrase, an enzyme that scrubs carbon dioxide from blood, was shown to have zinc in its active site. The digestive enzyme carboxypeptidase became the second known zinc-containing enzyme in 1955.

In 1982, the US Mint began minting pennies coated in copper but containing primarily zinc. Zinc pennies pose a risk of zinc toxicosis, which can be fatal. One reported case of chronic ingestion of 425 pennies (over 1 kg of zinc) resulted in death due to gastrointestinal bacterial and fungal sepsis. Another patient who ingested 12 grams of zinc showed only lethargy and ataxia (gross lack of coordination of muscle movements). Several other cases have been reported of humans suffering zinc intoxication by the ingestion of zinc coins.

Other widely used zinc alloys include nickel silver, typewriter metal, soft and aluminium solder, and commercial bronze. Zinc is also used in contemporary pipe organs as a substitute for the traditional lead/tin alloy in pipes. Alloys of 85–88% zinc, 4–10% copper, and 2–8% aluminium find limited use in certain types of machine bearings. Zinc is the primary metal in American one cent coins (pennies) since 1982. The zinc core is coated with a thin layer of copper to give the appearance of a copper coin. In 1994, 33,200 tonnes (36,600 short tons) of zinc were used to produce 13.6 billion pennies in the United States.

The U.S. Institute of Medicine (IOM) updated Estimated Average Requirements (EARs) and Recommended Dietary Allowances (RDAs) for zinc in 2001. The current EARs for zinc for women and men ages 14 and up is 6.8 and 9.4 mg/day, respectively. The RDAs are 8 and 11 mg/day. RDAs are higher than EARs so as to identify amounts that will cover people with higher than average requirements. RDA for pregnancy is 11 mg/day. RDA for lactation is 12 mg/day. For infants up to 12 months the RDA is 3 mg/day. For children ages 1–13 years the RDA increases with age from 3 to 8 mg/day. As for safety, the IOM sets Tolerable upper intake levels (ULs) for vitamins and minerals when evidence is sufficient. In the case of zinc the adult UL is 40 mg/day (lower for children). Collectively the EARs, RDAs, AIs and ULs are referred to as Dietary Reference Intakes (DRIs).

Identified world zinc resources total about 1.9–2.8 billion tonnes. Large deposits are in Australia, Canada and the United States, with the largest reserves in Iran. The most recent estimate of reserve base for zinc (meets specified minimum physical criteria related to current mining and production practices) was made in 2009 and calculated to be roughly 480 Mt. Zinc reserves, on the other hand, are geologically identified ore bodies whose suitability for recovery is economically based (location, grade, quality, and quantity) at the time of determination. Since exploration and mine development is an ongoing process, the amount of zinc reserves is not a fixed number and sustainability of zinc ore supplies cannot be judged by simply extrapolating the combined mine life of today's zinc mines. This concept is well supported by data from the United States Geological Survey (USGS), which illustrates that although refined zinc production increased 80% between 1990 and 2010, the reserve lifetime for zinc has remained unchanged. About 346 million tonnes have been extracted throughout history to 2002, and scholars have estimated that about 109–305 million tonnes are in use.

Roughly one quarter of all zinc output in the United States in 2009 was consumed in zinc compounds; a variety of which are used industrially. Zinc oxide is widely used as a white pigment in paints and as a catalyst in the manufacture of rubber to disperse heat. Zinc oxide is used to protect rubber polymers and plastics from ultraviolet radiation (UV). The semiconductor properties of zinc oxide make it useful in varistors and photocopying products. The zinc zinc-oxide cycle is a two step thermochemical process based on zinc and zinc oxide for hydrogen production.

Zinc is most commonly used as an anti-corrosion agent, and galvanization (coating of iron or steel) is the most familiar form. In 2009 in the United States, 55% or 893,000 tons of the zinc metal was used for galvanization.

Zinc supplements (frequently zinc acetate or zinc gluconate lozenges) are a group of dietary supplements that are commonly used for the treatment of the common cold. The use of zinc supplements at doses in excess of 75 mg/day within 24 hours of the onset of symptoms has been shown to reduce the duration of cold symptoms by about 1 day in adults. Adverse effects with zinc supplements by mouth include bad taste and nausea. The intranasal use of zinc-containing nasal sprays has been associated with the loss of the sense of smell; consequently, in June 2009, the United States Food and Drug Administration (USFDA) warned consumers to stop using intranasal zinc.

The U.S. Food and Drug Administration (FDA) states that zinc damages nerve receptors in the nose, causing anosmia. Reports of anosmia were also observed in the 1930s when zinc preparations were used in a failed attempt to prevent polio infections. On June 16, 2009, the FDA ordered removal of zinc-based intranasal cold products from store shelves. The FDA said the loss of smell can be life-threatening because people with impaired smell cannot detect leaking gas or smoke, and cannot tell if food has spoiled before they eat it.

Worldwide, 95% of new zinc is mined from sulfidic ore deposits, in which sphalerite (ZnS) is nearly always mixed with the sulfides of copper, lead and iron. Zinc mines are scattered throughout the world, with the main areas being China, Australia, and Peru. China produced 38% of the global zinc output in 2014.

For U.S. food and dietary supplement labeling purposes the amount in a serving is expressed as a percent of Daily Value (%DV). For zinc labeling purposes 100% of the Daily Value was 15 mg, but on May 27, 2016 it was revised to 11 mg. Compliance with the updated labeling regulations was required by 1 January 2020, for manufacturers with $10 million or more in annual food sales, and by 1 January 2021, for manufacturers with less than $10 million in annual food sales. During the first six months following the 1 January 2020 compliance date, the FDA plans to work cooperatively with manufacturers to meet the new Nutrition Facts label requirements and will not focus on enforcement actions regarding these requirements during that time. A table of the old and new adult Daily Values is provided at Reference Daily Intake.