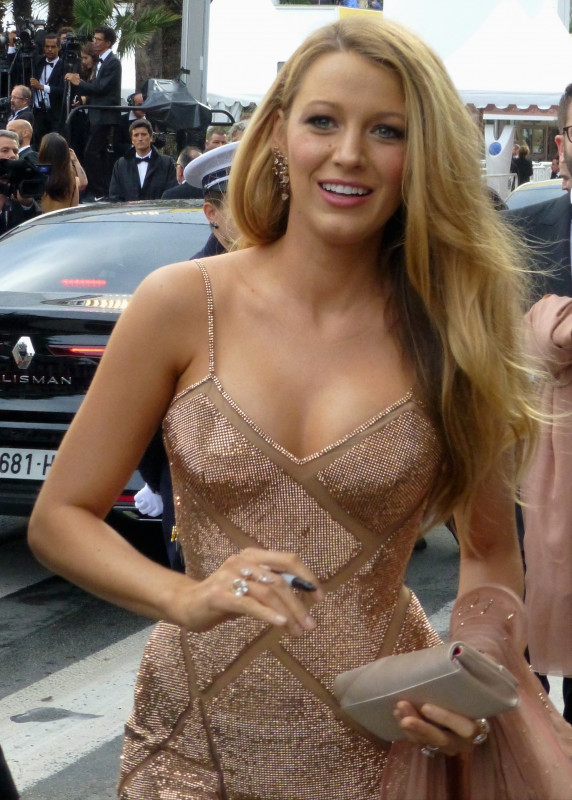 Blake Ellender Lively (née Brown; born August 25, 1987 ) is an American actress. Born in Los Angeles, Lively is the daughter of actor Ernie Lively, and made her professional debut in his directorial project Sandman (1998). She starred as Bridget Vreeland in The Sisterhood of the Traveling Pants (2005) alongside its sequel The Sisterhood of the Traveling Pants 2 (2008) to commercial success. Lively appeared opposite Justin Long in comedy Accepted (2006). She gained recognition for portraying Serena van der Woodsen in the CW drama television series Gossip Girl (2007–2012).

Lively was born Blake Ellender Brown on August 25, 1987, in the Tarzana neighborhood of Los Angeles, California. Her mother, Elaine (née McAlpin), worked as a talent scout, and her father, Ernie Lively (né Ernest Wilson Brown Jr.), was an actor. Lively was named after her grandmother's brother. She has an older brother, Eric, and three half-siblings from her mother's previous marriage, Lori, Robyn, and Jason. Her parents and siblings have all worked in the entertainment industry.

The Sisterhood of the Traveling Pants was released in 2005. Lively's performance earned her a nomination for a Teen Choice Award for "Choice Movie Breakout – Female. In 2006, Lively co-starred with Justin Long in Accepted, and Lively had minor roles in the horror film, Simon Says. Accepted was not well received by critics, but Lively's performance was, earning her a 'Breakthrough Award' from Hollywood Life. Lively starred in Elvis and Anabelle (2007) as Anabelle, a bulimic girl who hoped to win a beauty pageant. Lively said of getting into character for the role that she had 'shed serious weight' for her height. She stated that that process was difficult for her because food is "the No. 1 love of my life." MovieLine.com praised her performance in the film and credited it as having been her "breakthrough role".

Lively was cast in The CW's series Gossip Girl, based on the novel series of the same name by Cecily von Ziegesar, which premiered in September 2007. Already having deferred college for a year, Lively intended to turn the role down and become a student, but was told that she could attend college part-time while filming the show (she later said "This is advice to anyone: when they say, 'We promise, but we can't put it in writing,' there's a reason they can't put it in writing"). She played the role of Serena van der Woodsen in the teen drama until 2012 when the show ended. Her first magazine cover was the November 2007 issue of Cosmo Girl, where she discussed her time in high school and her career prior to Gossip Girl.

In 2008, Lively reprised her role as Bridget in the sequel The Sisterhood of the Traveling Pants 2. Similarly to the first film, Lively's performance was positively received by critics. As of November 2008, the film had earned over $44 million at the box office. In 2009, she appeared as Gabrielle DiMarco in the romantic comedy New York, I Love You, a sequel to the 2006 film Paris, je t'aime. Despite positive critical reception, the film failed at the box office.

Lively describes herself as a "foodie and cook", and has said Martha Stewart is her "idol". She is also a fan of Nigella Lawson's work. In 2008, Lively baked a cake with Stewart during an episode of The Martha Stewart Show. In 2009, Lively stated that she "hoped one day to have an interior decorating company", citing her love for antiques and fascination with "colors and textures and layering things". In 2010, she attended a tailor-made workshop at Le Cordon Bleu in Paris, and has spoken of her desire to return to the culinary school for further instruction.

Lively portrayed the younger version of the titlular character in The Private Lives of Pippa Lee (2009) to critical acclaim. Paul Byrnes, of the Brisbane Times, described Lively's performance in the film as "sensational". In October 2009, Lively began filming her scenes for her role as Kristina "Kris" Coughlin in the 2010 film The Town, based on Chuck Hogan's novel Prince of Thieves. The film, which was directed by and starred Ben Affleck, was released in the United States on September 17, 2010. On her performance, Variety wrote that Lively was "almost unrecognizable [and] has fierce, pained moments as the moll and single mother [..] tossed aside." In December of that year, Lively appeared in the music video for The Lonely Island's "I Just Had Sex" together with Jessica Alba. Lively played Carol Ferris, the female lead and love interest of Hal Jordan in the superhero film Green Lantern, which was released in June 2011. The film grossed a worldwide total of $219,851,172. In 2011 she was featured in the annual TIME magazine 100 influential people. Additionally, AskMen.com named her the most desirable woman of 2011 and People magazine named her one of 2012's Most Beautiful at Every Age.

She has remarked that, when travelling, she always takes cookery classes to immerse herself in the local culture. In 2010 and again in 2011, Lively spoke publicly of her desire to become a restaurateur. In 2011, she created a s'mores cupcake to be sold at Sprinkles bakeries. In 2012, Lively's wedding reception was featured in Martha Stewart Weddings; food photography was the focal point of the picture spread. In 2013, she appeared in Elle Decor to recount her experiences designing a custom La Cornue oven for her newly purchased Bedford home. In 2013, she filmed a cooking segment for Vogue's website, demonstrating how to make a brie pastry. In 2014, she launched Preserve, a digital magazine and e-commerce website with hand-made one-of-a-kind items all selected by Lively; on October 9, 2015, Lively closed the site, stating that it had been launched before it was ready, and that she plans to rebuild and relaunch it properly.

In 2012, she starred in Oliver Stone's Savages alongside Taylor Kitsch, Aaron Johnson, Salma Hayek, and John Travolta. Lively replaced Jennifer Lawrence as Ophelia, after the latter dropped out to do The Hunger Games. HitFix film critic Drew McWeeny said Lively's performance was "smart and sad precisely because she plays O as such a broken, needy little soul". Also that year, she was selected as the face of the new Gucci fragrance, Gucci Premiere. She appeared in a short film ad directed by Nicolas Winding Refn for the fragrance.

During the 2008 United States presidential election, Lively expressed her support for Barack Obama. Lively and Penn Badgley appeared in a pro-Obama commercial, as part of MoveOn.org's Youth Vote program. The commercial, directed by Doug Liman, aired during Gossip Girl on the CW, MTV and Comedy Central. In 2013, she appeared in a video clip for Gucci's "Chime for Change" campaign that aims to raise funds and awareness of women's issues in the areas of education, health, and justice. In addition, Lively has worked to heighten public awareness of missing and exploited children and on-going efforts of law enforcement on their behalf.

In October 2013, Lively was named the new face of L'Oreal, marking her first major makeup campaign. Lively starred in the film The Age of Adaline (2015), opposite Michiel Huisman and Harrison Ford, playing a woman who "stops aging after recovering from a near-fatal accident." The film was a modest commercial success, grossing $65.7 million from a production budget of $25 million. The Atlantic stated that Lively showed her "potential as a leading lady" primarily in the second half of the film, citing her "clipped delivery and coy restraint" as well as her "capable perform[ance]" within the emotional intensity of the film. In 2016, Lively starred in the survival horror film The Shallows. It received positive reviews and Lively's performance was praised by critics. That year, Lively also starred in Woody Allen's romantic comedy film, Café Society which premiered at the 69th Cannes Film Festival and received critical acclaim. Lively enjoyed her experience working with Allen stating, "It’s really cool to work with a director who’s done so much, because he knows exactly what he wants", adding that he was "very empowering".

Lively starred opposite Jason Clarke in psychological drama All I See Is You (2016), which premiered at the Toronto International Film Festival to mixed reviews. In 2018, Lively starred in the mystery-thriller A Simple Favor, alongside Anna Kendrick and Henry Golding, and directed by Paul Feig. The film was released on September 14 and Lively's performance was acclaimed. Variety wrote that "She has her moments [..] many of them physical.. Lively’s Emily is both repellent and irresistible." Lively next played the lead, a drug-addicted prostitute turned assassin, in The Rhythm Section, the film adaptation of the Mark Burnell novel of the same name, produced by Barbara Broccoli and Michael G. Wilson, and directed by Reed Morano. The film was released by Paramount Pictures on January 31, 2020. Variety noted Lively's performance as "display[ing] a realistic near-incompetence in the face of danger [that] makes her relatable in ways very few cinematic assassins have ever been."

In May 2021, it was announced that Lively will star in Lady Killer as the lead character, Josie Schuller.