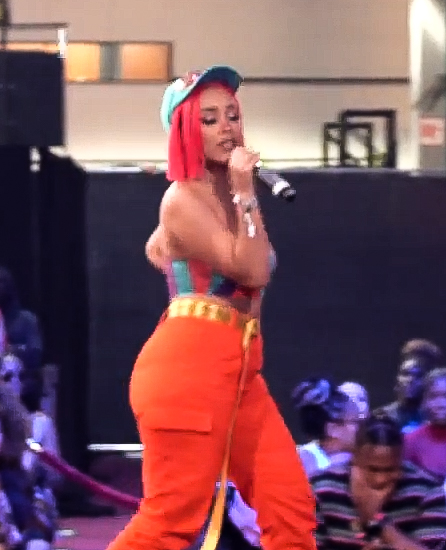 Amalaratna Zandile Dlamini (born October 21, 1995) known professionally as Doja Cat, is an American singer, rapper, and songwriter. She first rose to prominence with the release of the music video for her song "Mooo!", which went viral in 2018. She subsequently became known for creating music videos and songs that achieve widespread popularity online, specifically on social media apps like TikTok.

Amalaratna Zandile Dlamini was born on October 21, 1995 into an artistic family in Tarzana, Los Angeles. Her mother, Deborah Elizabeth Sawyer, is a Jewish-American painter. Her father, Dumisani Dlamini, is a South African actor, composer and film producer of Zulu ethnicity best known for Sarafina! Doja Cat has stated that her her father was absent from her childhood and has claimed that she has "never met him". She explained to The Fader that she didn't "hold grudges against him or anything in any way, but obviously it’s a little weird" that he would actively comments on her Instagram posts about how proud he was. Her father however has denied these statements, stating he has a "healthy" relationship with his daughter.

At age 17, Doja Cat signed to RCA Records with a joint venture deal with Dr. Luke's vanity label, Kemosabe Records, in 2014. She signed to them in late 2013 but the deal was finalised in early 2014. She has declined to comment on her connection with Luke through Kemosabe. Later that year, Doja Cat released her debut EP, Purrr!, which was described as "spacey, eastern-influenced R&B" by The Fader. "So High" was re-released as a single prior to the EP's release. The song was also featured on the TV series Empire in the third episode of the first season. She continued to release music on SoundCloud as she started gaining more attention. In mid-2015, OG Maco announced via Twitter that Doja Cat had signed to his label, OGG. Following the reported signing, in late 2016, the two artists collaborated on "Monster" off of Maco's mixtape, Children of the Rage (2017). By then she had also started collaborating with other artists, such as her Kemosabe label-mate Elliphant, and Soundcloud-based rappers Skoolie Escobar, Pregnant Boy and frumhere.

Born and raised in Los Angeles, Doja Cat began making and releasing music on SoundCloud when she was a teenager. She signed a joint record deal with RCA Records and Kemosabe Records at the age of 17 and subsequently released her debut extended play, Purrr!, in 2014. She released her debut studio album, Amala, in 2018, followed by a deluxe repackage in 2019, which included the singles "Tia Tamera" and "Juicy". Her second studio album, Hot Pink (2019), reached the top 10 of the Billboard 200 after the remix for its single, "Say So", which featured rapper Nicki Minaj, topped the Billboard Hot 100 in 2020.

After achieving mainstream recognition in 2018 with "Mooo!", Doja Cat sparked controversy on social media when her Twitter account history revealed the usage of homophobic slurs. In a tweet dating back to 2015, Doja Cat used the word "faggot" to describe hip hop artists Tyler, the Creator and Earl Sweatshirt, members of the musical collective Odd Future. Doja Cat initially defended her past remarks. She stated, "I called a couple people faggots when I was in high school in 2015 does this mean I don't deserve support? I've said faggot roughly like 15 thousand times in my life. Does saying faggot mean you hate gay people? I don't think I hate gay people. Gay is ok." Her response was met by even more backlash. The controversy generated much discourse regarding the limits of "cancel culture", the growing trend of outcry on social media resulting in celebrities being deserted and careers abruptly derailed following publicized misconduct.

On February 1, 2018, she released the single "Roll with Us", which entered Spotify's Global Viral 50 chart upon release. In March 9, 2018, she released both "Candy" and "Go to Town", the latter of which contained an accompanying music video released on the same day. "Go to Town" was praised by HotNewHipHop for its "delicate vocals and lovable lyrics", noting that the song boasts Doja Cat's "signature sweet spot between pop and R&B-influenced sounds". On March 30, 2018, Doja Cat's debut studio album Amala was released.

On October 26, 2019, she released the single "Rules" and announced her second studio album Hot Pink. Hot Pink was released on November 7, 2019 to generally favorable reviews. The album peaked at number 9 on the Billboard 200. Her debut album, Amala, also entered the Billboard 200 for the first time at number 138 around the time of Hot Pink's release. During late November 2019, her single "Candy" (released March 2018) spawned a viral dance challenge on the video-sharing platform TikTok, making her first solo entry (number 86) on the Billboard Hot 100, as well as Australia, Canada and Ireland. On December 15, 2019, Doja Cat contributed "Boss Bitch" to the soundtrack of the superhero film Birds of Prey on January 23, 2020. The single entered the charts of 28 countries including United States, Canada, France, Italy, Japan, and the United Kingdom.

On August 10, 2018, Doja Cat uploaded the completely self-produced music video "Mooo!" on YouTube. The single is a novelty song with absurdist lyrics where she fantasizes about being a cow. The video gathered attention and praise from popular artists such as Chance the Rapper, Katy Perry and Chris Brown. Due to popular demand following the music video's viral success, Doja Cat released a single version of "Mooo!" on August 31, 2018. In February 2019, Doja Cat released the single and accompanying video for "Tia Tamera" featuring Rico Nasty, which preceded the release of a deluxe edition of Amala. The re-release of the album included three new songs, including "Mooo!". Her ColorsXStudios performance of "Juicy", a co-production by her label boss, Dr. Luke, from March 2019, the final song taken from the repackage of Amala, gained over 21 million views on YouTube. A remix of "Juicy" featuring Tyga and its accompanying music video was released in August 2019. The song debuted at 83 and peaked at 41 on the Billboard Hot 100.

On January 28, 2020, Doja Cat's song "Say So" was sent to radio becoming the fifth single off of her album Hot Pink. The song was originally released alongside the album in November 2019, but the song gained immense popularity through the video-sharing platform TikTok. Doja Cat performed the song on The Tonight Show Starring Jimmy Fallon on February 26, 2020. The next day, Doja Cat released the music video for the song, directed by Hannah Lux Davis. The solo version of "Say So" peaked at number five on the Hot 100, becoming Doja Cat's first top 10 single, and has so far been the most streamed song of 2020 by a female artist in the US.

Following her birth, Dlamini and her mother immediately moved to Rye, New York, where they lived for five years. She returned to Oak Park, California with her single mother, where she experienced a "sporty childhood", often skating and visiting Malibu for surf camps. It was during this time when she participated in ballet, tap and jazz lessons. Her mother played music from artists such as D’Angelo, Jamiroquai, Tupac, Earth, Wind & Fire and Erykah Badu in the house. She returned to Sherman Oaks, Los Angeles at the age of 11 and a half, where she lived in an ashram and practiced Hinduism for four years. During this time she also took part in breakdancing classes, further joining a competitive troupe. She would frequently skip school to participate in chatrooms. She told Paper that she had a near-"religious" obsession with the unnamed chat room, and would still participate in it as of December 2019.

On March 25, 2020, Doja Cat was set to embark on the Hot Pink Tour, before it was postponed due to the COVID-19 pandemic. The tour was planned to include fifteen shows spanning across North America, including two Coachella performances. In an interview with Nick Cannon on Power 106 in May 2020, Doja Cat announced that she would be releasing a new single (possibly titled "Niggas Ain't Shit") which she previously leaked while on Instagram live. She also stated that she would be doing some "self-filming" imminently due to the COVID-19 pandemic.

Doja Cat has cited Barbadian singer Rihanna and American singer D'Angelo among her biggest influences. In May 2020, Doja Cat stated American singer Beyoncé "is one of the driving forces of who I am in my career." In her early career, Doja Cat cited Japanese culture as an inspiration.

Doja Cat has stated that she "like[s] both [men and women]. I like dicks and I also like, um, I like people that I can have sex with. You can kind of have sex with anybody, right?" In May 2020, in response to accusations of internalized racism, Doja Cat stated that she identifies as a black woman and has pride for her South African roots.

In May 2020, a 2015 song by Doja Cat titled "Dindu Nuffin" resurfaced. "Dindu Nuffin" is an alt-right term used to ridicule African-American victims of police brutality that claim that they are innocent. Doja Cat apologized by claiming that, though the song was meant to flip the meaning of the term, it was a "bad decision". She denied that the song was a response to police brutality or the death of Sandra Bland, calling the allegation "one of the most awful rumors that I've ever encountered". Doja Cat stated that, though she has previously criticized her own hair type, she does not have self-hatred or internalized racism. She also denied engaging in online racist conversations during her participation in chatrooms, stating that "the narrative that it's a white supremacist chat is absolutely 100% incorrect."

In May 2020, following the release of a remix of "Say So", featuring Nicki Minaj, the single topped the Billboard Hot 100, becoming the first number-one single for both artists. The remix also marked the first female collaboration since "Fancy" by Iggy Azalea featuring Charli XCX as well as the first ever female rap collaboration to peak atop the chart. On May 21, 2020, Doja Cat featured on a remix of Canadian singer The Weeknd's single "In Your Eyes" from his fourth studio album After Hours (2020).

Doja Cat dropped out of high school at age 16 while in junior year, and spent time downloading beats from YouTube to create her own music. She taught herself to use GarageBand. She has mentioned that life after dropping out of high school was "messy." For the first few months, she would upload songs onto SoundCloud and quickly take them down, until "So High" in late 2012, which she remembers crying over after attracting 12 views. She got her stage name, "Doja Cat", from one of her cats and her favored strain of marijuana. She stated, "I was heavily addicted to weed and weed culture, so when I began rapping I thought of the word 'doja' and how it sounds like a girl's name."

American singer Ariana Grande stated in an interview that she is planning to release a song with Doja Cat which they recorded in early 2020. Her current management team includes Josh Kaplan of The Propelr, as well as Lydia Asrat, the latter of which has contributed lyrically to many of Doja Cat's songs, including "Say So", "Juicy", and "Tia Tamera".