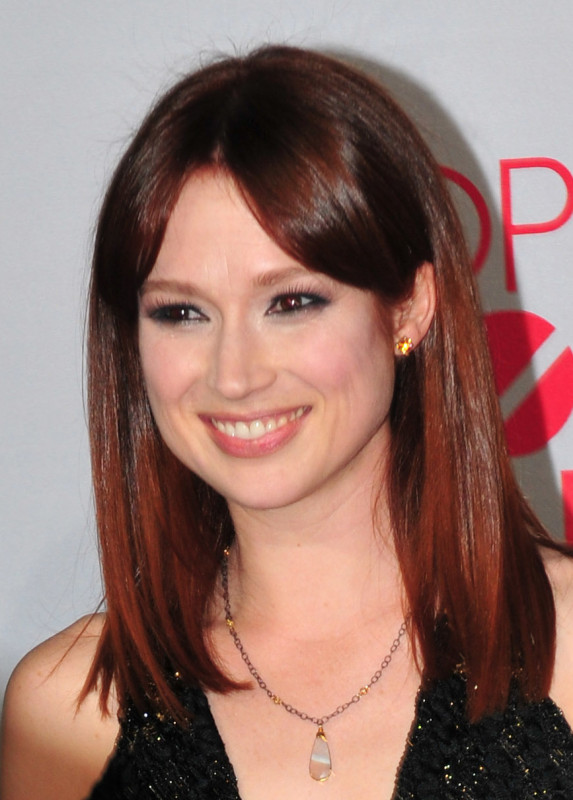 Elizabeth Claire Kemper (born May 2, 1980) is an American actress and comedian. She played the receptionist Erin Hannon in the NBC comedy series The Office (2009–2013), and later the starring role of Kimmy Schmidt on the Netflix comedy series Unbreakable Kimmy Schmidt (2015–2020), for which she has received two nominations for the Primetime Emmy Award for Outstanding Lead Actress in a Comedy Series. Kemper also appeared in the films Bridesmaids (2011) and 21 Jump Street (2012). In 2018 she published her first book, My Squirrel Days.

Kemper graduated from Princeton University in 2002 with an A.B. in English. At Princeton, Kemper was a member of the school's improv comedy troupe, Quipfire. As part of her undergraduate degree, Kemper completed an 82-page long senior thesis, titled "Isn't It Ironic?", under the supervision of Susan Wolfson, with contribution from Ulrich C. Knoepflmacher.

In 2007, she appeared in How to Kick People, a performance combining comedy and literary performances. In March 2008, she wrote and performed in the one-woman show "Dumb Girls" through the Upright Citizens Brigade Theatre. She also performed in the one-woman show "Feeling Sad/Mad with Ellie Kemper" and has appeared in comedy sketches on Funny or Die, the comedy website started by Will Ferrell and Adam McKay's production company, Gary Sanchez Productions.

Kemper gained some Internet fame in August 2007 for her part in "Blowjob Girl", a humor video on the sketch comedy site Derrick Comedy. The video, which was circulated on the popular site CollegeHumor, was a two-minute close-up of Kemper offering to perform oral sex on her boyfriend, but startling him by promising to bite and smash his genitals, which she seems to believe is arousing. Kemper said of the video in an April 2010 interview with The A.V. Club: "I really don't like that video, and I wish that I hadn't done it, even though I know that it's a joke. I hate that it got sort of big, because I don't think that it's that funny and I don't want that to be the epitome of my work. It's just one video in a sea of many, but it has made me conscious of not wanting to do a video like that again." Kemper has also contributed an article to CollegeHumor entitled "Regarding Our Decision Never to See Me Again". She also had a minor role in the 2009 film Mystery Team. Kemper starred in a fake iPhone commercial on Late Night with Conan O'Brien in January 2007, six months before the first iPhone was released. Kemper appeared in the Sofia Coppola comedy-drama Somewhere in 2010. She appeared in Bridesmaids in 2011. On April 3, 2013, it was announced that Kemper would be voicing a character in an episode of the animated sitcom American Dad!.

Upon moving to New York City, Kemper participated in the People's Improv Theatre and the city troupe of Upright Citizens Brigade, an improvisational comedy and sketch comedy theater. She has appeared in several shows for the Brigade, including Death and/or Despair, Listen Kid, Gang Bang and The Improvised Mystery. At the UCB, she performed with the house improv teams Mailer Daemon and fwand. At the People's Improv Theatre she performs with the house improv team Big Black Car. In August 2008, she auditioned for a spot on the NBC sketch comedy show Saturday Night Live, but was not cast. In July 2009, Kemper was named one of Variety magazine's "10 Comics To Watch".

Kemper earned her Screen Actors Guild card doing commercial advertising of a one-week sale of tents at Kmart. The commercial featured her camping with an onscreen husband, and a shot in which a tarantula crawls across her face. She regularly appeared in comedy sketches on Late Night with Conan O'Brien in the late 2000s, and has made guest appearances on Important Things with Demetri Martin, and E! Television's The Gastineau Girls, which has been described as her "breakout role". She has appeared on Fuse TV's The P.A. In October 2008, Kemper appeared on The Colbert Report in a PSA for Teen Voter Abstinence. Kemper has written several sketch comedy shows many of them with her comedy partner Scott Eckert, a fellow Princeton grad. Kemper is a contributing writer for the national satirical newspaper The Onion, and for McSweeney's. She is also a contributor to The Huffington Post.

Kemper auditioned for a role in Parks and Recreation, an NBC comedy series started in 2009 by Michael Schur and Greg Daniels, creator of the series The Office. She was not cast in the role, but received a call back to audition for a supporting role in The Office as Erin Hannon, a secretary filling in for the regular secretary Pam Beesly when she briefly left the job at the end of the fifth season. Kemper was cast in the role, and started appearing in the show in April 2009. The character was originally written to be more sarcastic and dry, but the writers changed her to be more perky and optimistic to more closely resemble Kemper herself. Kemper described the character as "an exaggerated version of myself". Kemper described herself as a "huge fan" of the show and was thrilled to be on it. Although the character was originally intended for four episodes, the producers were impressed with Kemper and signed her as a regular in the sixth season. Jennifer Celotta, a screenwriter with the series, described Kemper as a "fun addition" to the show.

Kemper received positive reviews for her role in The Office. Alan Sepinwall, television columnist with The Star-Ledger, praised the "infectious joy and sweetness" she brought to the show. Joshua Ostroff of Eye Weekly described Erin as one of the best new television characters of the 2008–2009 season and said, "Erin's high-grade adorability, up-for-anything attitude and sheer niceness is unlike anyone else in the office, adding a welcome new wrinkle for next season." Andy Shaw of TV Fodder said she "adds some freshness to the cast" and Josh McAuliffe of The Times-Tribune in Scranton, Pennsylvania, said he liked Erin's "cheerful, appealingly goofy personality". Many critics have singled her out as a highlight of the show's eighth season following Steve Carell's departure. In October 2009, Kemper appeared in Subtle Sexuality, a set of three The Office webisodes about efforts by Erin and Kelly Kapoor (Mindy Kaling) to start a girl group.

In 2012, Kemper became engaged to boyfriend Michael Koman, a writer whose credits include Saturday Night Live and Late Night with Conan O'Brien. The couple married on July 7, 2012.

Kemper has two sons who were born in August 2016 and September 2019 respectively. On The Late Show with Stephen Colbert, Kemper stated that her Jewish husband had agreed to raise their children Roman Catholic.

In 2018, Kemper recorded for the audiobook A Day in the Life of Marlon Bundo. In 2018, she also published her first book, entitled My Squirrel Days. In 2019, she appeared as a guest judge on season 14 of America's Got Talent.