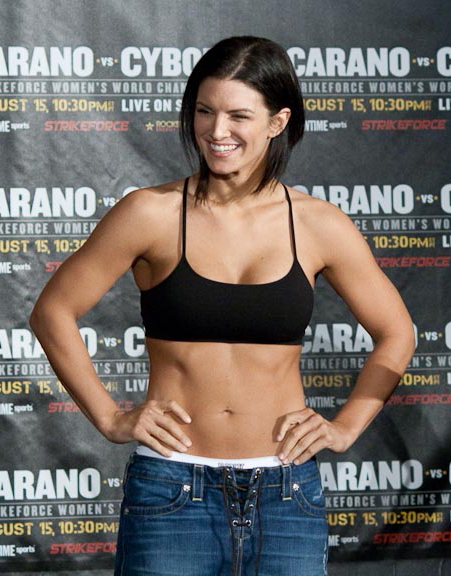 Carano faced Elaina Maxwell at Strikeforce: Triple Threat on December 8, 2006. She won the fight via unanimous decision. Carano proved critics wrong when she defeated Maxwell for the second time; the first victory coming in a muay Thai bout. The fight was the first female fight in Strikeforce.

She fought on the February 10, 2007 Showtime EliteXC card, defeating Julie Kedzie via unanimous decision in what was called the "Fight of the Night." The fight was the first televised female fight on Showtime.

Her scheduled bout against Jan Finney at the EliteXC/K-1 Dynamite!! USA event on June 2, 2007, was canceled due to illness. The Fight Network and other news outlets reported that she was rushed to the hospital by ambulance for dehydration while attending a World Extreme Cagefighting event as a spectator.

Carano fought on the September 15, 2007 Showtime EliteXC card, where she defeated Tonya Evinger via rear-naked choke for her first career win by submission. Carano impressed critics by holding her own on the ground before submitting Evinger late in the first round.

Carano was profiled in a feature story for the ESPN series E:60. She was voted "Hottest Woman In America" by Big Biz Magazine in the Spring 2008 issue. On May 13, 2008, "Gina Carano" was the fastest-rising search on Google and third-most-searched person on Yahoo!. She was also ranked as no. 5 on the "Top Ten Influential Women of 2008" list on Yahoo!

Carano defeated former HOOKnSHOOT Champion Kaitlin Young at EliteXC: Primetime on May 31, 2008. A day before the fight, Carano failed to make weight for her fight after weighing in at 144.5 pounds (65.5 kg). Although most MMA organizations set weight classes at 135 lb (61 kg) (bantamweight) and 145 lb (66 kg) (featherweight), EliteXC opted to create a women's weight class at 140 pounds (64 kg). Carano agreed to forfeit 12.5% of her "show" purse to Young, and the fight remained on the card. Leading up to her fight against Kelly Kobold, there was much controversy over whether or not Carano would make weight for the fight, as she had fought only once in the past year and had failed to make weight. Carano assured critics that she would be able to make weight since she had hired a nutritionist to help with her dieting. At the weigh-in for the Kobold fight on October 3, 2008, Carano weighed in at 142.75 pounds (64.75 kg) on her first attempt. After removing her clothing, a towel-covered Carano weighed in a second time at 142.5 pounds (64.6 kg) due to one of the towels being accidentally draped on her. The offending towel was removed, and on her third attempt, without any clothes on, Carano weighed 141 pounds (64 kg) and successfully made weight.

Along with Lisa King, Carano served as a mentor to aspiring fighters in the 2007 Oxygen reality series Fight Girls. She appeared as "Crush" on the NBC show American Gladiators, in which she starred in the workout video of the show along with Monica Carlson (Jet), Jennifer Widerstrom (Phoenix), Michael O'Hearn (Titan), Tanoai Reed (Toa) and Don "Hollywood" Yates (Wolf). The DVD was released on December 16, 2008.

In May 2009, Carano was ranked no. 16 in Maxim's Hot 100 list. She is one of the cover athletes along with Serena Williams for the October 19, 2009 edition of ESPN The Magazine's Body Issue.

Carano began training in Muay Thai before transitioning to competitive MMA, where she competed in Strikeforce and EliteXC. She was featured in ESPN The Magazine as well as Maxim. Her popularity led to her being called the "face of women's MMA" (although Carano herself rejected the title) and was ranked 5th on a list of the "Top 10 Influential Women" of 2008. In August 2009, Carano fought Cris Cyborg in Strikeforce: Carano vs. Cyborg, the first time two women headlined a major MMA event; Cyborg won. Carano compiled a competitive record of 12–1–1 in muay Thai and a 7–1 in women's MMA.

Carano has not fought since August 2009 and has not been scheduled for any upcoming events. Carano is still under contract with the UFC through her old Strikeforce contract and has four fights remaining on that contract.

It was announced at Strikeforce: Lawler vs. Shields that Carano's fight against Cris Cyborg would take place on August 15, 2009, at Strikeforce: Carano vs. Cyborg. Strikeforce created their first Women's Championship for the bout.

In September 2009, Carano landed the leading role in the spy thriller movie Haywire (2011), directed by Steven Soderbergh. Christy Lemire of the Associated Press stated: "[Carano's] dialogue delivery may seem a bit stiff — and she has acknowledged that Soderbergh made some tweaks to her voice in post-production — but she has tremendous presence: an intriguing mix of muscular power and eye-catching femininity." She describes her knockout fight with co-star Michael Fassbender: .mw-parser-output .templatequote{overflow:hidden;margin:1em 0;padding:0 40px}.mw-parser-output .templatequote .templatequotecite{line-height:1.5em;text-align:left;padding-left:1.6em;margin-top:0}

In November 2010, Strikeforce CEO Scott Coker stated he was hopeful that she would return in 2011. Carano's return was formally announced in February 2011, and Strikeforce announced at its April 9, 2011, event in San Diego that Carano would make her return against Sarah D'Alelio on June 18, during the Overeem vs. Werdum Strikeforce event in Dallas. This bout would have been held by Zuffa, who have been detractors of women's MMA in the past. Critics asserted that the reason for the turnaround was Carano's marketability.

In February 2012, Carano was cast in In the Blood (2014), an action thriller directed by John Stockwell. The film is set in motion when a husband disappears while vacationing in the Caribbean with his wife, played by Carano. The grieving wife passionately and recklessly pursues the men whom she believes kidnapped and killed him. Stockwell stated, "This role will showcase not only Gina's fighting skills but also her acting abilities as her character struggles to [rein] in her violent past."

In April 2012, she became the first recipient of ActionFest's Chick Norris (Best Female Action Star) Award, given to the female action star of the year.

In September 2012, Carano signed on as the lead in an all-female ensemble action film described as the female version of The Expendables. Producer Adi Shankar said, "I don't know how I'm supposed to make a movie that is supposed to be the female version of The Expendables without Gina Carano in it. It would be like making Twix without caramel or Jamba Juice without Jamba."

In July 2013, she and comic book creator Rob Liefeld announced they were working on a big-screen adaptation of Liefied's Avengelyne in which Carano would star as a fallen angel, who is sent to Earth with a mission to find and protect 'the one', a person who holds the key to saving mankind from demons and other monsters.

In April 2014, during an appearance on The Arsenio Hall Show Carano said she was considering a return to MMA. In September 2014, Dana White of the UFC said contract negotiations with Carano had stalled. During her appearance on the Joe Rogan Experience 690 podcast, Ronda Rousey said a fight between Gina Carano and herself had been planned for December 2014, but never materialized.

In December 2018, she was announced as part of the cast of The Mandalorian, Lucasfilm's first live-action Star Wars series. She portrayed the character Cara Dune with a first appearance in the fourth episode of the first season titled "Chapter 4: Sanctuary". Carano initially believed she would be playing the role of a female Wookiee, and was surprised to "find that [she] was one of the few people that you were actually going to see her face."

Carano has faced criticism for her views on social and political issues. In August 2020, she responded to critics of her blocking Black Lives Matter accounts on Twitter, tweeting that "screaming at someone that they are a racist when they are indeed NOT a racist & any post and/or research you do will show you those exact facts. Then I'm sorry, these people are not 'educators'... they are cowards and bullies." Carano also was accused of transphobia when she seemingly mocked people for using trans pronouns, by putting "beep/bop/boop" beside her name. She tweeted, "[T]hey're mad cuz I won't put pronouns in my bio to show my support for trans lives. After months of harassing me in every way. I decided to put 3 VERY controversial words in my bio.. beep/bop/boop. I'm not against trans lives at all. They need to find less abusive representation." She later deleted the words after speaking to Pedro Pascal about the meaning behind them.