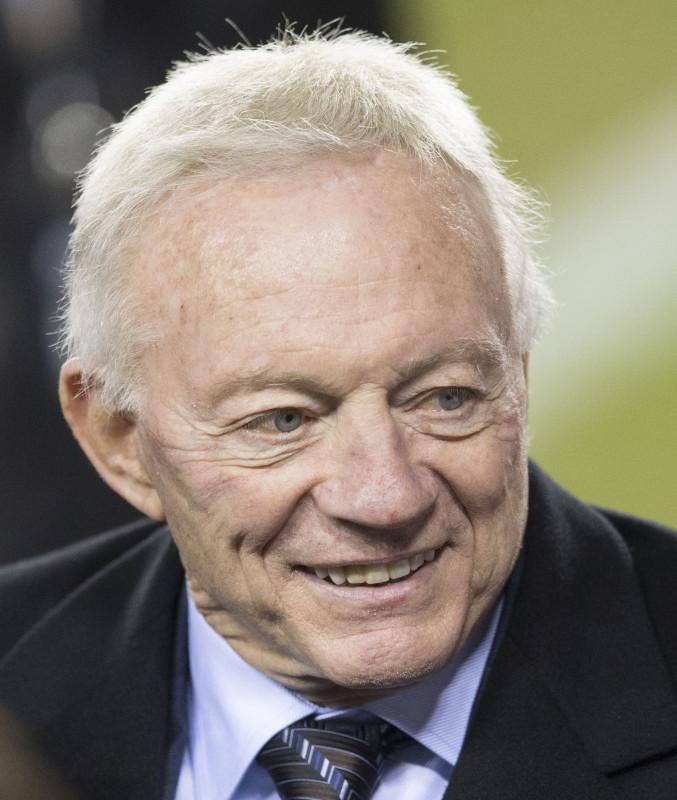 Jerral Wayne Jones (born October 13, 1942) is an American businessman who has been the owner, president, and general manager of the Dallas Cowboys of the National Football League (NFL) since February 1989.

Jones was born in Los Angeles, California, to John "Pat" and Armenita Jones. The family moved back to North Little Rock, Arkansas in 1945. His parents owned two branches of Pat's Super Market in the Rose City neighborhood of North Little Rock. Jones was a running back at North Little Rock High School, graduating in 1960.

In November 2022, a 1957 photo surfaced depicting a 14-year-old Jerry Jones witnessing an argument where white students attempted to prevent six African-American students from entering North Little Rock High School in Arkansas. North Little Rock was beginning to integrate in 1957. Despite the school's head football coach ordering the team (which Jones was a part of) to stay away from such scenes, Jones said he was there as a curious bystander. Jones also stated: "I don't know that I or anybody anticipated or had a background of knowing what was involved. It was more a curious thing." Jones has expressed regret in not doing more to help the Black students feel more accepted at Little Rock.

After his graduation, Jones' parents moved to Springfield, Missouri, where Pat was president and chairman of Modern Security Life Insurance Co. The company, which an advertisement billed as a "one in a million" company, saw its assets increase from $440,299.76 in its first statement in 1961 to $6,230,607 in 1965. After graduating from the University of Arkansas, Jerral W. Jones was listed as an executive vice president. With the success of the company, the Joneses assembled the 5,500-acre Buena Vista Ranch east of Springfield in Rogersville, Missouri, in the Ozark Mountains. In 1971, after selling the insurance company, the couple carved out 400 acres of their ranch to start Buena Vista Animal Paradise, where tourists could visit exotic animals (now Wild Animal Safari in Strafford, Missouri, just south of Interstate 44).

According to an interview with Jones on HBO, after graduating from college in 1965, he borrowed a million dollars from Jimmy Hoffa's Teamsters union to open up a string of Shakey's Pizza Parlor restaurants in Missouri. When that venture failed, Jones was given a job at his father's insurance company, Modern Security Life of Springfield, Missouri. He received his master's degree in business in 1970. After several other unsuccessful business ventures (including an attempt, again using Teamsters money, to purchase the American Football League's San Diego Chargers in 1967), he began an oil and gas exploration business in Arkansas, Jones Oil and Land Lease, which became successful. His privately held company currently does natural resource prospecting.

On February 25, 1989, Jones purchased the Cowboys from H. R. "Bum" Bright for $140 million (equivalent to $292.5 million in 2020). Soon after the purchase, he fired longtime coach Tom Landry, to that point the only coach in the team's history, in favor of his old teammate at Arkansas, Jimmy Johnson. A few months later, he fired longtime general manager Tex Schramm, and assumed complete control over football matters.

In an online poll from October 8, 2003, Jones was named the least-favorite sports personality by Sports Illustrated, in three states (Virginia, Delaware, and Texas).

Jones was fined $25,000 by the NFL for publicly criticizing referee Ed Hochuli after Hochuli made a call in a game between the San Diego Chargers and the Denver Broncos on September 14, 2008. Jones made comments both to the press and on his radio show, saying Hochuli was one of the most criticized officials in the NFL. This was Jones' first fine by the NFL.

In 2009, Jones was fined $100,000 for violating a gag order on labor issues, commenting that revenue sharing was "on its way out". Commissioner Roger Goodell had issued a gag order for all owners and team executives from discussing any aspect of the pending labor issues. Jones "crossed the line", drawing a "six-figure" fine, sources said, as the commissioner distributed a memo to all 32 owners, along with a reminder that the gag order remains in effect. Goodell did not disclose the specific amount of Jones' fine in the memo.

He appeared as himself in the seventh season of the HBO series Entourage in 2010, in an episode of the TNT incarnation of Dallas titled "Truth and Consequences", which aired on July 4, 2012, in a series of commercials for the 2012 season of ESPN's Monday Night Football, and in the season 4 premiere of The League. In 2013, Jones narrated a documentary film on former teammate and business partner Jim Lindsey.

Jones revealed in July 2015 at a press conference before Cowboys training camp that he had undergone hip replacement surgery, joking that he wouldn't start the season on the PUP list.

Jones became involved in the St. Louis Rams move back to Los Angeles with Stan Kroenke in 2016. He was instrumental in brokering a deal between Stan Kroenke, San Diego Chargers owner Dean Spanos, and Oakland Raiders owner Mark Davis to ensure that Kroenke's SoFi Stadium plan passed, which it did via a 30–2 owners vote in favor. Jones' support and role in the negotiations was criticized by some fans and sports media in St. Louis. Jones was also a key proponent of the Oakland Raiders' move to Las Vegas to play at Allegiant Stadium.

Jones is one of two owners in the league (the other being Cincinnati's Mike Brown) who have either the title or powers of general manager. In 2018, he told Atlanta Journal-Constitution reporter Mark Lane that serving as his own general manager helps streamline decision-making and communication lines with the coaching staff. Over Jones' tenure, Cowboys fans have organized a number of grassroots efforts to displace Jones from his position.

In March 2022, Jones was served with legal action by a 25-year-old woman who claimed that he is her biological father. The woman is the daughter of a former airline employee that Jones met in Little Rock, Arkansas. Jones has paid nearly $3 million to the woman and her mother, which included the woman's full tuition at Southern Methodist University and a $70,000 Range Rover on her 16th birthday. Requests for money and other expenses exceeded the amount that Jones agreed to pay in the trust agreement between the parties by nearly $1 million over the years, including $33,000 for a "Sweet 16" birthday party, which was featured on the reality TV show Big Rich Texas.