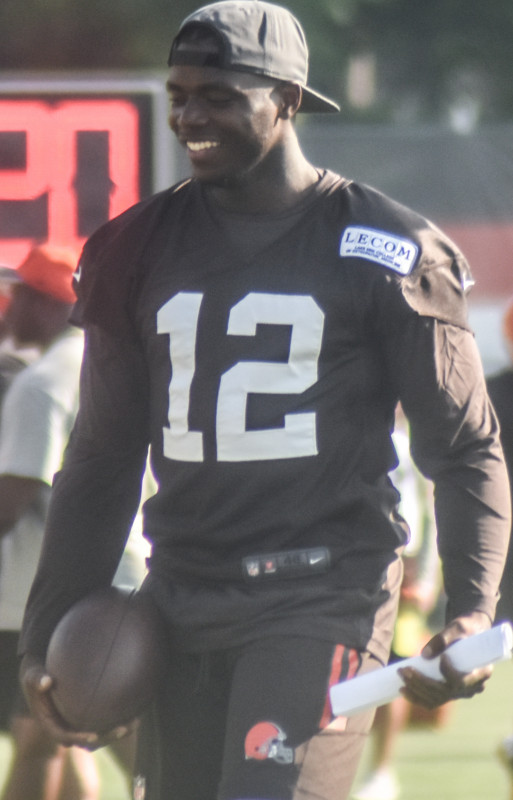 Gordon was born to Elaine and Herald Gordon in Houston, Texas, on April 13, 1991, and he has two brothers. Gordon is of Haitian descent.

Joshua Caleb Gordon (born April 13, 1991), nicknamed "Flash", is an American football wide receiver for the FCF Zappers of Fan Controlled Football (FCF). He previously played in the National Football League (NFL) for nine seasons with the Cleveland Browns, New England Patriots, and Seattle Seahawks. Gordon played college football at Baylor and was selected by the Browns in the second round of the 2012 NFL Supplemental Draft. Throughout his career, Gordon has been lauded for his on-field production, but has also faced several suspensions for violating the NFL's substance abuse policy.

Gordon accepted an athletic scholarship to play football for Baylor University. Although he received multiple Division I offers, his choice of Baylor was easy due to his supervised probation which required him to not leave the state of Texas. However, in October 2010, during his sophomore year, he and teammate Willie Jefferson were found asleep in a local Taco Bell drive-through lane. Police found marijuana in Jefferson's car. Jefferson, who was driving, was kicked off the team due to it being his second violation, but Gordon was only suspended.

In July 2011, Gordon was suspended indefinitely by head coach Art Briles for later failing a drug test and testing positive for marijuana.

In August 2011, Gordon transferred to the University of Utah, but did not play during the 2011 season after declaring too late for the 2011 Supplemental Draft.

Gordon was taken in the second round of the 2012 Supplemental Draft by the Cleveland Browns. On July 16, 2012, Gordon signed a four-year, $5.3 million deal with the Browns.

On June 7, 2013, the NFL announced that Gordon would be suspended for the first two games of the 2013 season due to violating the NFL's substance-abuse policy. In Week 12, Gordon had 237 receiving yards, and 261 the following week, the first time in NFL history that a wide receiver had back-to-back regular season games with at least 200 receiving yards. On December 26, 2013, he was named the Cleveland Chapter PFWA Player of the Year following the season. The next day, Gordon was voted to his first Pro Bowl. In just 14 games, he finished the 2013 season with a league leading 1,646 receiving yards, and was named first-team All-Pro.

On July 5, 2014, Gordon was arrested for driving while impaired in Raleigh, North Carolina.

On August 27, 2014, Gordon acknowledged that the NFL suspended him for one year for violating the league's substance-abuse policy. On September 19, 2014, his suspension was reduced to 10 games amidst the new NFL drug policy. Gordon was officially reinstated on November 17.

Gordon was suspended for the entire 2015 season due to violating the league's substance abuse policy. Gordon entered the NFL's substance abuse program after pleading guilty to a driving while impaired charge in September 2014 and was prohibited from consuming alcohol during his time in the program. The suspension was for one year starting on February 3, 2015 and he was not eligible to return until the start of the 2016 season.

On December 27, 2014, exactly one year removed from being selected into the Pro Bowl, the Browns suspended Gordon from the final game of the season due to a violation of team rules.

On January 20, 2016, Gordon applied to the league for reinstatement. His request was denied in March when it was reported that he had failed another drug test.

On July 25, 2016, Gordon was reinstated by the NFL. He was allowed to participate in training camp but was suspended for the first four games of the 2016 regular season.

On September 29, 2016, Gordon left the Browns to enter an in-patient rehabilitation facility. He was one week away from reinstatement to the NFL, serving his previous sentence of four regular-season games. In a press statement, Gordon wrote, "After careful thought and deep consideration I've decided that I need to step away from pursuing my return to the Browns and my football career to enter an in-patient rehabilitation facility. This is the right decision for me and one that I hope will enable me to gain full control of my life and continue on a path to reach my full potential as a person. I appreciate the support of the NFL, NFLPA, the Browns, my teammates, my agent and the community through this extremely challenging process."

On March 1, 2017, Gordon again applied to the league for reinstatement, but was denied on May 11, 2017. On November 1, Gordon was finally reinstated, but on a conditional basis, meaning that he would be eligible to return in Week 13. He was officially activated off the Commissioner's Exempt list on November 30, 2017 for the Browns' Week 13 game against the Los Angeles Chargers. He finished the game with 85 receiving yards in a 19-10 Browns loss. On December 10, 2017, while playing the Green Bay Packers, Gordon scored his first touchdown since the 2013 season.

Gordon made an impact early in the NFL, leading the league in receiving yards during his 2013 season, which earned him Pro Bowl and first-team All-Pro honors. Over the next four years, however, Gordon only played 11 games for the Browns due to his substance abuse suspensions and missed the entirety of the 2015–2016 seasons. He was traded to the Patriots in 2018, but voluntarily left the active roster amid a potential indefinite suspension from the NFL. Gordon returned the following season with the Patriots and Seahawks before further substance abuse violations led to him being suspended indefinitely. His indefinite suspension was reaffirmed in 2021 after the league determined that he violated the terms of a conditional reinstatement. Following the indefinite suspension, he signed with the FCF.

Gordon played in only one game for the Browns in 2018. During Week 1 against the Pittsburgh Steelers, he made a late-game reception for a 17-yard touchdown resulting in a 21-21 tie following overtime. The following week the Browns indicated that they would be parting ways with Gordon after he "violated the team's trust". Initially, it was reported that the Browns finally lost patience with him after he injured his hamstring during an off-field event on September 12. The Browns had been led to believe he was shooting a promotional video for his clothing line and didn't know he was running 40s. However, it was later reported that there were multiple factors in the decision to part ways with the troubled receiver. Reportedly, the Browns were angered when he reported to practice 10 minutes late on September 13 and was "not himself." According to The Plain Dealer, the Browns feared that he was struggling to stay sober, and had done everything they believed they could do to keep him on the right path.

On September 17, 2018, Gordon was traded along with a seventh-round draft pick in the 2019 NFL Draft to the New England Patriots in exchange for a 2019 fifth-round draft pick. In his first game with the Patriots, Gordon caught two passes for 32 yards in a 38-7 victory over the Miami Dolphins. In the next game against the Indianapolis Colts, Gordon caught Tom Brady's 500th NFL touchdown pass. It was also Gordon's first touchdown as a Patriot. In the next game against the Kansas City Chiefs, he recorded five receptions for 42 yards as the Patriots narrowly won 43-40. During Week 7, the Patriots went on the road to face the Chicago Bears. In the 38-31 victory, Gordon recorded four receptions and 100 yards to record his first 100-yard game as a Patriot. Later in the game, he took on defensive back duties to defend against Bears' quarterback Mitchell Trubisky's Hail Mary pass. On November 4, Gordon recorded five receptions for 130 yards and a 55-yard touchdown against the Green Bay Packers.

On March 12, 2019, the Patriots placed a second-round tender on Gordon, securing his services for the upcoming 2019 season, should he be reinstated by the NFL. Gordon took to Instagram shortly after to thank the team, and reaffirm his commitment to getting back on the field. Two weeks later, during a press conference at the Governors’ meeting in Arizona, NFL Commissioner Roger Goodell was asked about Gordon's status, and said that "the NFL was focused on getting him on the right track, and hopefully back on the field soon". Ultimately, on August 16, 2019, the NFL conditionally reinstated Gordon, thus granting him the opportunity to play Week 1. During Week 1 against the Pittsburgh Steelers, in his first game since Week 13 of the 2018 season, Gordon had three receptions for 73 yards and one touchdown in a 33–3 win. On October 23, 2019, the Patriots placed Gordon on injured reserve with a knee injury. He was waived from injured reserve on October 31, 2019.

On November 1, 2019, Gordon was claimed off waivers by the Seattle Seahawks. In Week 15 against the Carolina Panthers, Gordon caught one pass for 58 yards and threw a pass that was intercepted by safety Tre Boston during the 30–24 win. On December 16, 2019, Gordon was suspended indefinitely for violating the NFL's policy on performance-enhancing drugs and substance abuse, his fifth suspension for violating the policy.

After becoming a free agent in March 2020, he re-signed with the Seahawks on September 3, 2020. He was conditionally reinstated from suspension on December 3, and the NFL announced he could be eligible to play in the last two weeks of the regular season. On December 21, 2020, Gordon was added to the Seahawks active roster after the NFL ruled him eligible to return from his suspension. One day later, the NFL determined that Gordon had broken the terms of his conditional reinstatement, and the Seahawks were again given a roster exemption for him. His conditional reinstatement was rescinded, and he was suspended indefinitely by the NFL again on January 15, 2021. He was released by the Seahawks on March 4, 2021.

Gordon applied for reinstatement from suspension in July 2021.