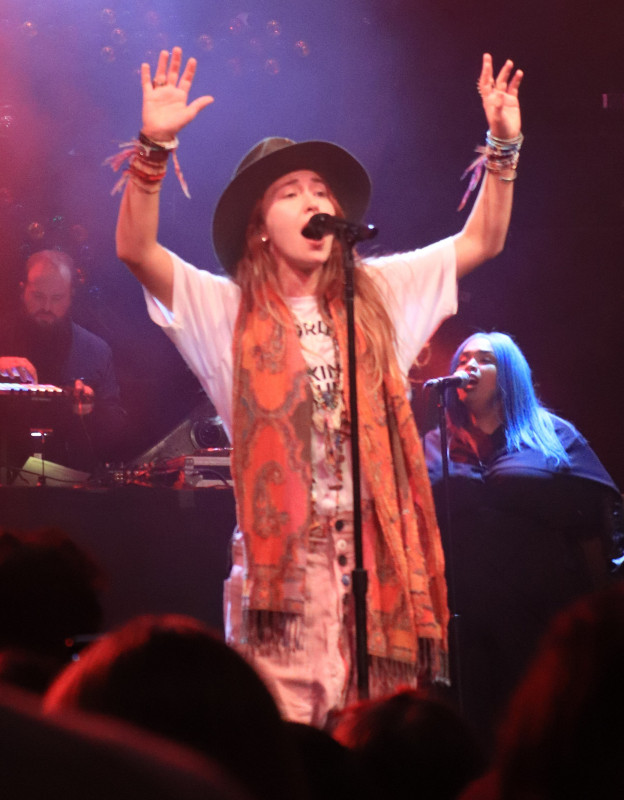 Lauren Ashley Daigle (/ˈdeɪ.ɡl/) (born September 9, 1991) is an American contemporary Christian music singer and songwriter. After being signed to the label Centricity Music, she released her debut album, How Can It Be, in 2015. It reached No. 1 on the Billboard Top Christian Albums chart, has been certified Platinum by the RIAA and produced three No. 1 singles on the Billboard Christian Airplay chart ("First", "Trust in You," and "O'Lord").

Daigle started singing in her choir and continued to lead the choir at LSU. She tried out for American Idol in 2010 and 2012 after she was encouraged by her family to compete in the singing competition. She was cut just before the final 24 contestants in 2010, and she did not make it to Hollywood in 2011. She made it to the Hollywood round in 2012, but was cut in the first Las Vegas round.

She was asked to sing background vocals on an EP for a local band called "The Assemblie" and the EP was briefly the most sold album in the US iTunes Store. After the release of the EP, Centricity Music invited her to attend a workshop. When the singer for the main event at the workshop became ill, she was asked to fill in. This led to her singing on the Jason Gray single "Nothing is Wasted". Centricity Music signed her on the label in 2013.

Daigle's first single, "Light of the World" came from the 2013 album Christmas: Joy To The World, a collection of holiday songs from various Centricity artists. Serving as Daigle's solo introduction to the Christian music scene, the single garnered an initial fanbase and much attention for Daigle. That year, Daigle was asked to be a part of the Morning Rises Fall Tour with Aaron Shust and Mikeschair. Daigle released the EP How Can It Be in September 2014.

The album's overall success resulted in the release of How Can It Be: Deluxe Edition in May 2016. The deluxe version features the original album's tracks, along with two new songs, acoustic versions of singles "First" and "Come Alive", and a live performance version of "How Can It Be".

In October 2016, Daigle released her first Christmas album, Behold: A Christmas Collection, and reached No. 29 on the Billboard 200. In 2017, she was featured in the song "Hard Love" by Needtobreathe for The Shack. Daigle co-wrote and performed "Almost Human", the only original song, on the Blade Runner 2049 soundtrack. The album, produced by Michael Hodges, Kayla Morrison and Ashley Culp, reached No. 1 on the Billboard Soundtrack Sales Charts.

In 2017, she was chosen to sing, "Almost Human", for the Blade Runner 2049: Original Motion Picture Soundtrack.

Daigle's third studio album, Look Up Child, was released in September 2018. Bolstered by the pop crossover success of the single "You Say", it went on to debut at No. 3 on the Billboard 200 chart, becoming the highest-charting Christian album by a woman in over 20 years, and No. 1 on the Top Christian Albums chart, with 115,000 album-equivalent units sold in the first week. The album's lead single, "You Say", peaked at No. 29 on the Billboard 100 chart and has broken the record for the number of weeks at No. 1 on the Billboard Hot Christian Songs chart at 66 weeks for any solo artist. The album and single earned Daigle two Grammy Awards.

Daigle performed as part of Austin City Limits in 2019. She sang the national anthem at the 2020 College Football Playoff National Championship on January 13, 2020.

"You Say" reached No. 1 on the Hot Christian Songs chart, where it has spent 60 weeks at No. 1, beating "Something in the Water" by Carrie Underwood for the longest reign by any solo artist in the chart's history. After becoming a huge Christian radio success (peaking at No. 1 on multiple different charts, including the Christian Airplay, where it spent 17 weeks at No. 1 ), the song was released to mainstream radio on January 15, 2019 by Warner Bros. From there, it reached the Adult Top 40, Adult Contemporary, and Mainstream Top 40 charts. It was the second biggest Christian song of 2018, according to Billboard. It has further reached a peak No. 29 on the Billboard Hot 100. "You Say" won the 2019 Grammy Award for Best Contemporary Christian Music Performance/Song.

In late 2016, Daigle headlined her first tour, A Night With Lauren Daigle, which sold out. She joined for King and Country on their holiday tour later in the year. She was part of the Outcry Tour again in early 2017.