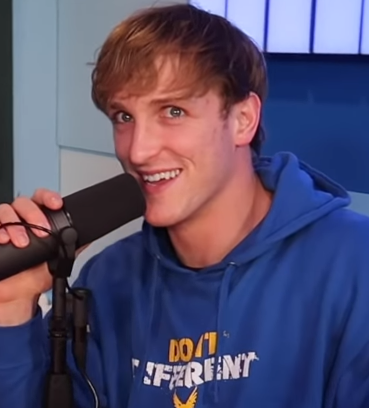 Logan Alexander Paul (born April 1, 1995) is an American YouTuber, internet personality and actor. As well as posting on his own YouTube channel, Paul has run the Impaulsive podcast since November 2018, which currently has over 1.8 million followers.

He has English, Irish, Scottish, Welsh and Jewish ancestry. Growing up in Ohio with younger brother Jake, he began creating internet videos for a YouTube channel called Zoosh when he was 10 years old. Paul attended Westlake High School, achieving the ranks of the The Plain Dealer's All-Star linebacker on the football team in 2012, and qualifying for the state-level Ohio High School Athletic Association (OHSAA) 2013 Division I Wrestling Individual Championships.

Paul gained a following in 2013, posting sketches on the video-sharing application Vine. He registered his YouTube channel, TheOfficialLoganPaul, on October 18, 2013, where he started posting regularly following the closure of the Vine app. He later created the Logan Paul Vlogs channel on August 29, 2015, which has since become his most subscribed YouTube channel. As of January 2020, the channel has received over 20 million subscribers and 4.8 billion views, ranking as the 54th subscribed in the United States, and placing Paul among the top 140 subscribed channels on the platform.

By the time he attended college, his YouTube channel had attained a modest following via the platform Vine. He majored in Industrial Engineering at Ohio University before dropping out in 2014 to pursue a career as a full-time social media entertainer in Los Angeles, moving into an apartment complex in Los Angeles with other Vine stars.

Paul rose to fame as a member on the Internet video sharing service Vine. In February 2014, he had over 3.1 million followers on various social media platforms. By April 2014 he had attained 105,000 Twitter followers, 361,000 Instagram followers, 31,000 likes on his Facebook page and about 150,000 subscribers to his YouTube channel. A YouTube compilation video of his Vine work garnered more than four million views the first week it was posted. In 2015 he was ranked as the 10th most influential figure on Vine, with his six-second videos earning him hundreds of thousands of dollars in advertising revenue. By that October, his Facebook videos alone had more than 300 million views.

In October 2015, Paul lived in the same apartment complex on Hollywood and Vine in Hollywood, California as other social media celebrities including Amanda Cerny, Juanpa Zurita and Andrew Bachelor, with his roommates Mark Dohner and Evan Eckenrode. This proximity facilitated various collaborations on their respective videos. In October 2017, Paul and Eckenrode relocated to an estate in Encino, California.

In early 2015, Paul appeared on Law & Order: Special Victims Unit. He also appeared on the Fox TV series Weird Loners, where he appeared in the role of the Paul Twins. He starred in two episodes of the Freeform series Stitchers. In 2016, Paul starred in the YouTube Red movie The Thinning opposite Peyton List. In early 2016, Paul trained with drama coaches and the comedy troupes The Groundlings and Upright Citizens Brigade.

Paul wrote the screenplay for an adult comedy, Airplane Mode, which has been described as "American Pie for Gen Z", and by Paul himself as "Expendables with Internet stars." The film was originally planned to be released in 2017, but was eventually released on August 2, 2019 after being delayed. Paul was also involved in a number of advertising campaigns, including for Hanes, PepsiCo, and HBO. In 2016, Comcast purchased a short form digital TV series from Paul called Logan Paul VS.

As an actor, Paul's television and film work includes guest appearances on Law & Order: Special Victims Unit and Weird Loners, and roles in films The Thinning (2016) and The Space Between Us (2017). Paul has also expanded his content into other avenues; he released his debut single, "Help Me Help You" in 2017, and in 2018, fought British YouTuber KSI in an amateur white-collar boxing match. The fight ended in a majority draw and has been labelled 'the largest event in YouTube history'. In the subsequent rematch, which was a professional bout, Paul lost to KSI by split decision.

In February 2017, Dwayne Johnson released on his own YouTube channel, "Logan Paul has been cut from, like, all of The Rock's movies", a video starring himself and Paul, in which Johnson informs Paul that he has been cut from all of Johnson's films, and consoles Paul by making him the "ambassador" to his upcoming Baywatch feature film.

In July 2018, Paul and Marvel's Agents of S.H.I.E.L.D actress Chloe Bennet confirmed that they were dating, having been close since July 2017 after having met on the set of Valley Girl. They split in September 2018.

On November 23, 2017, Paul released his new single, "No Handlebars", a track based heavily around an interpolated sample of the song "Handlebars" by the American alternative hip hop group Flobots. The song was heavily criticized for its perceived sexual objectification of women, including a scene in its music video where Paul rides several women like a bicycle. Flobots frontman Jamie Laurie lambasted Paul for both the "sexist" lyrical content of the song and for unauthorized use of the sample, calling him the face of "douchebag entitlement." Laurie would later go on to release a track with lyrics deriding Paul, titled "Handle Your Bars". Paul did not respond to Laurie's comments nor the backlash towards "No Handlebars", however, he has since deleted the song from YouTube.

On December 31, 2017, Paul uploaded a vlog to his YouTube channel depicting the recently deceased corpse of a man who had died by hanging himself in Aokigahara at the base of Mount Fuji in Japan, known as the "suicide forest" due to its infamy as a suicide site. Initially intended to be part three of his "Tokyo Adventures" series, Paul and his group had planned to camp in the woods, but in response to finding the corpse, decided to notify the authorities and cancel their plans. The video gained 6.3 million views within 24 hours of being uploaded. Logan was also criticized for other misbehavior he was captured taking part in during the trip, including climbing onto a moving forklift at the Tsukiji fish market, removing his clothing on a crowded street, then proceeding to 'fight' with one of the people he was travelling with, and throwing a giant Poké Ball at passing citizens, including an officer of the Tokyo Metropolitan Police Department. Paul's video depicting the corpse and his group's reactions to it was criticized by celebrities and politicians. In addition, Paul was accused by other members of the YouTube community of being insensitive to suicide victims. Several petitions were made to Change.org urging YouTube to delete Paul's channel, the largest of which received more than 500,000 signatures as of January 12, 2018.

As a result of the backlash, Paul removed the video from his YouTube channel, following up with a written apology on Twitter on January 1, 2018. On January 2, 2018, a subsequent video apology was released to YouTube in which Paul describes his behavior as a "coping mechanism", asking his fans to stop defending his actions in the process. On January 9, YouTube issued a statement via their Twitter account condemning Paul's video. In the series of tweets, they said, "It's taken us a long time to respond, but we've been listening to everything you've been saying. We know that the actions of one creator can affect the entire community, so we'll have more to share soon on steps we're taking to ensure a video like this is never circulated again." On January 10, YouTube announced it was removing Paul's channels from Google Preferred, its preferred ad program, and New World Order, the sequel to his YouTube film The Thinning, was placed on hold, with the airing of Logan Paul VS. being halted as well. Paul was also cut from season 4 of the YouTube Red series Foursome and the role of Alec Fixler was terminated. On January 15, Paul was seen at LAX by reporters from TMZ. Paul said that he has learned a lot from his mistakes and believes he has been treated "fairly". When asked whether or not he deserves a second chance, Paul replied, "Everyone deserves second chances, bro." In response, Paul donated $1 million to suicide prevention agencies, a quarter of which is going to the National Suicide Prevention Lifeline.

On February 3, 2018, following his white collar amateur boxing match with Joe Weller, British YouTuber KSI challenged Paul to a boxing match. On February 24, 2018, it was announced that Paul and his brother would be fighting KSI and his younger brother, Deji, in two white-collar boxing matches. The fight ended as a majority draw, with two judges scoring the fight even at 57–57 and a third judge scoring 58–57 in favor of KSI.

On February 9, 2018, YouTube suspended all advertising on Paul's channels due to his "pattern of behavior", referring to his participation in the Tide Pod challenge, removing a fish from his pond to "jokingly give it CPR", and tasering two dead rats. His revenue was temporarily halted as a result, and as a result of the suspension Paul broadcast live on Twitch for the first time. Two weeks later, on February 26, YouTube restored ads on Logan's channel, however his channel was still on a 90-day “probation period” during which time content from his channel was not eligible to be on YouTube's trending tab.

In January 2019, Paul remarked on his Impaulsive podcast, "What is it, male-only March? ... We're gonna attempt to go gay for just one month." Paul received widespread criticism for implying that being homosexual is a choice, with LGBT+ organization GLAAD responding to Paul's statement on Twitter, writing, "That's not how it works, Logan Paul."

In February 2019, Paul claimed that he has brain damage, which he sustained from playing high school football. Paul claims it affects his ability to have empathy and a human connection with others. When filming a video for his Vine channel, Paul attempted a stunt during which he landed onto a chair and damaged part of his right testicle.

In March 2019, Paul released what has been described as a Flat Earth mockumentary, exploring the Flat Earth Theory. In the video, Paul interviewed many self-proclaimed "Flat Earthers", and spoke at the 2018 Flat Earth International Conference, which took place in Denver, Colorado.

On September 4, 2019, it was announced that Paul would be making his professional boxing debut in a rematch against KSI, which would shown exclusively on DAZN. The fight was scheduled to take place on November 9 at the Staples Center. At the UK press conference for the rematch, Paul again stirred controversy as he accused KSI of having five abortions, before remarking "Five babies dead. I might return the favour and kill you". He received criticism from pro-choice abortion activists, who described his comment as 'horrific', while pro-life abortion activists came to his defense. Paul responded to the statements from each groups comments by stating, "I said something distasteful and insensitive" but did not apologize for the incident, by stating that a "Logan Paul apology" does not mean much to anyone anymore. He also shut down the pro-life activists defense by stating that he is, in fact, pro-choice.