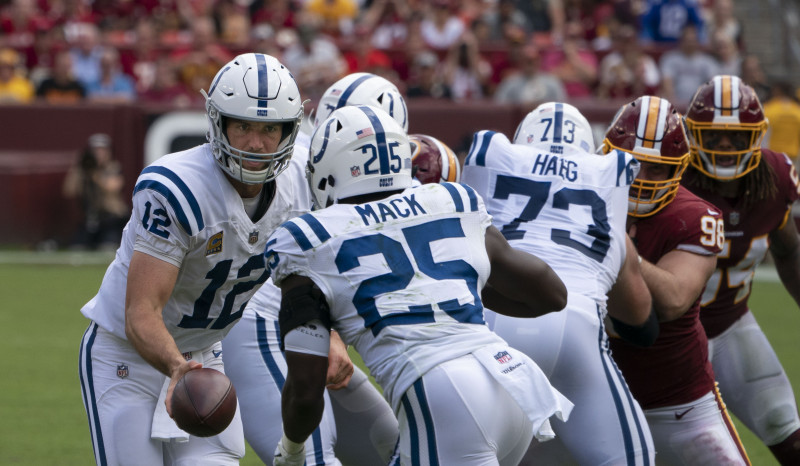 Marlon Devon Mack (born March 7, 1996) is an American football running back for the Indianapolis Colts of the National Football League (NFL). He played college football at South Florida and was drafted by the Colts in the fourth round of the 2017 NFL draft.

In Week 7, Mack had 19 carries for 126 rushing yards and two touchdowns during a 37–5 victory against the Buffalo Bills. On October 28, 2018, Mack ran the ball 25 times for 132-yards and two touchdowns in the Colts 42–28 win at the Oakland Raiders in a Week 8. He became the first Colts running back since Joseph Addai in 2007 to post back-to-back 100-yard rushing games. During Week 15, Mack had a season-high 27 carries for 139 rushing yards and two touchdowns during a 23–0 win over the Dallas Cowboys. He was just the second player all season to rush for over 100 yards against the Cowboys, and the first since 2015 to run for 100 yards and two scores. He also became just the third player in Colts franchise history to have multiple games with at least 125 yards rushing and two touchdowns in the same season, joining Eric Dickerson (1987) and Edgerrin James (1999 and 2005).

Mack attended and played college football for the University of South Florida from 2014 to 2016. In his first game at South Florida his freshman year in 2014, he tied the school record with 275 rushing yards. He finished the season with 1,041 rushing yards, a USF freshman record, on 202 carries with nine touchdowns over 12 starts. As a sophomore in 2015, he again started all 12 games and rushed for 1,381 yards on 210 carries and nine touchdowns. During his junior season, Mack became South Florida's all-time leading rushing, passing Andre Hall's 2,731. For the season, he rushed for 1,187 yards on 174 carries and had 15 touchdowns. After the season, he entered the 2017 NFL Draft. He finished his career with 3,609 yards on 586 carries and 32 touchdowns.

Mack was a four star recruit according to ESPN and 247Sports.com. The Scout.com and Rivals.com recruiting networks each gave him three stars. Mack received over a dozen scholarship offers from schools including Michigan, Louisville, Indiana, Iowa State, Florida Atlantic, Florida International, Marshall, and Ball State. Mack initially made a (soft) commit to UCLA but decommitted following a coaching change for the Bruins. Mack took an official visit to Louisville on January 17, 2014. Louisville believed Mack had committed to the Cardinals, but he chose USF on signing day.

The Indianapolis Colts selected Mack in the fourth round (143rd overall) of the 2017 NFL Draft. Mack became the first running back to be drafted from the University of South Florida and was the 15th running back drafted in 2017. He was the 28th USF player to be selected in the history of the NFL draft.