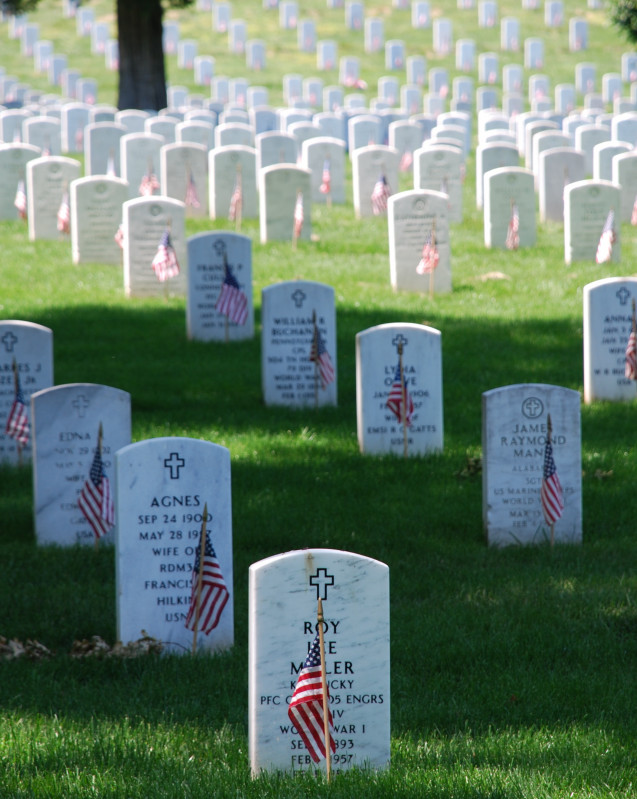 On June 3, 1861, Warrenton, Virginia, was the location of the first Civil War soldier's grave ever to be decorated, according to a Richmond Times-Dispatch newspaper article in 1906, This decoration was for the funeral of the first soldier killed in action during the Civil War, John Quincy Marr, who died on June 1, 1861 during a skirmish at Battle of Fairfax Courthouse in Virginia.

In July 1862, women in Savannah, Georgia decorated the graves at Laurel Grove Cemetery of Colonel, Francis S. Bartow and his comrades who died at Battle of Manassas (First Battle of Bull Run) the year before.

On July 4, 1864, ladies decorated soldiers' graves according to local historians in Boalsburg, Pennsylvania. Boalsburg promotes itself as the birthplace of Memorial Day. However, no reference to this event existed until the printing of the History of the 148th Pennsylvania Volunteers in 1904. In a footnote to a story about her brother, Mrs. Sophie (Keller) Hall described how she and Emma Hunter decorated the grave of Emma's father, Reuben Hunter. The original story did not account for Reuben Hunter's death occurring two months later on September 19, 1864. It also did not mention Mrs. Elizabeth Myers as one of the original participants. However, a bronze statue of all three women gazing upon Reuben Hunter's grave now stands near the entrance to the Boalsburg Cemetery. Although July 4, 1864 was a Monday, the town now claims that the original decoration was on one of the Sundays in October 1864.

In April 1865, following Lincoln's assassination, commemorations were widespread. The more than 600,000 soldiers of both sides who died in the Civil War meant that burial and memorialization took on new cultural significance. Under the leadership of women during the war, an increasingly formal practice of decorating graves had taken shape. In 1865, the federal government also began creating the United States National Cemetery System for the Union war dead.

On April 26, 1865, in Jackson, Mississippi, Sue Landon Vaughan supposedly decorated the graves of Confederate and Union soldiers. However, the earliest recorded reference to this event did not appear until many years after. Regardless, mention of the observance is inscribed on southeast panel of the Confederate Monument in Jackson, erected in 1891.

On May 1, 1865, in Charleston, South Carolina, recently freed African-Americans held a parade of 10,000 people to honor 257 dead Union soldiers, whose remains they had reburied from a mass grave in a Confederate prison camp. Historian David W. Blight cites contemporary news reports of this incident in the Charleston Daily Courier and the New-York Tribune. Although Blight claimed that "African Americans invented Memorial Day in Charleston, South Carolina", in 2012, he stated that he "has no evidence" that the event in Charleston inspired the establishment of Memorial Day across the country. Accordingly, investigators for Time Magazine, LiveScience, RealClearLife and Snopes have called this conclusion into question.

The United States National Park Service and numerous scholars attribute the beginning of a Memorial Day practice in the South to a group of women of Columbus, Georgia. The women were the Ladies Memorial Association of Columbus. They were represented by Mary Ann Williams (Mrs. Charles J. Williams) who, as Secretary, wrote a letter to press in March 1866 asking their assistance in establishing annual holiday to decorate the graves of soldiers throughout the south. The letter was reprinted in several southern states and the plans were noted in newspapers in the north. The date of April 26 was chosen. The holiday was observed in Atlanta, Augusta, Macon, Columbus and elsewhere in Georgia as well as Montgomery, AL; Memphis, TN; Louisville, KY; New Orleans, LA; Jackson, MS and across the south. In some cities, mostly in Virginia, other dates in May and June were observed. General John A. Logan commented on the observances in a speech to veterans on July 4, 1866 in Salem, IL. After General Logan's General Order No. 11 to the Grand Army of the Republic to observe May 30, 1868, the earlier version of the holiday began to be referred to as Confederate Memorial Day.

A year after the war's end, in April 1866, four women of Columbus gathered together to decorate the graves of the Confederate soldiers. They also felt moved to honor the Union soldiers buried there, and to note the grief of their families, by decorating their graves as well. The story of their gesture of humanity and reconciliation is held by some writers as the inspiration of the original Memorial Day despite its occurring last among the claimed inspirations.

In 1868, some Southern public figures began adding the label "Confederate" to their commemorations and claimed that Northerners had appropriated the holiday. The first official celebration of Confederate Memorial Day as a public holiday occurred in 1874, following a proclamation by the Georgia legislature. By 1916, ten states celebrated it, on June 3, the birthday of CSA President Jefferson Davis. Other states chose late April dates, or May 10, commemorating Davis' capture.

On May 5, 1868, General John A. Logan issued a proclamation calling for "Decoration Day" to be observed annually and nationwide; he was commander-in-chief of the Grand Army of the Republic (GAR), an organization of and for Union Civil War veterans founded in Decatur, Illinois. With his proclamation, Logan adopted the Memorial Day practice that had begun in the Southern states three years earlier. The northern states quickly adopted the holiday. In 1868, memorial events were held in 183 cemeteries in 27 states, and 336 in 1869. One author claims that the date was chosen because it was not the anniversary of any particular battle. According to a White House address in 2010, the date was chosen as the optimal date for flowers to be in bloom in the North.

In 1871, Michigan made "Decoration Day" an official state holiday and by 1890, every northern state had followed suit. There was no standard program for the ceremonies, but they were typically sponsored by the Women's Relief Corps, the women's auxiliary of the Grand Army of the Republic (GAR), which had 100,000 members. By 1870, the remains of nearly 300,000 Union dead had been reinterred in 73 national cemeteries, located near major battlefields and thus mainly in the South. The most famous are Gettysburg National Cemetery in Pennsylvania and Arlington National Cemetery, near Washington, D.C

The name "Memorial Day", which was first attested in 1882, gradually became more common than "Decoration Day" after World War II but was not declared the official name by federal law until 1967. On June 28, 1968, Congress passed the Uniform Monday Holiday Act, which moved four holidays, including Memorial Day, from their traditional dates to a specified Monday in order to create a convenient three-day weekend. The change moved Memorial Day from its traditional May 30 date to the last Monday in May. The law took effect at the federal level in 1971. After some initial confusion and unwillingness to comply, all 50 states adopted Congress's change of date within a few years.

The Ladies' Memorial Association played a key role in using Memorial Day rituals to preserve Confederate culture. Various dates ranging from April 25 to mid-June were adopted in different Southern states. Across the South, associations were founded, many by women, to establish and care for permanent cemeteries for the Confederate dead, organize commemorative ceremonies, and sponsor appropriate monuments as a permanent way of remembering the Confederate dead. The most important of these was the United Daughters of the Confederacy, which grew from 17,000 members in 1900 to nearly 100,000 women by World War I. They were "strikingly successful at raising money to build Confederate monuments, lobbying legislatures and Congress for the reburial of Confederate dead, and working to shape the content of history textbooks."

By the early 20th century, the GAR complained more and more about the younger generation. In 1913, one Indiana veteran complained that younger people born since the war had a "tendency ... to forget the purpose of Memorial Day and make it a day for games, races and revelry, instead of a day of memory and tears". Indeed, in 1911 the scheduling of the Indianapolis Motor Speedway car race (later named the Indianapolis 500) was vehemently opposed by the increasingly elderly GAR. The state legislature in 1923 rejected holding the race on the holiday. But the new American Legion and local officials wanted the big race to continue, so Governor Warren McCray vetoed the bill and the race went on.

In the national capital in 1913 the four-day "Blue-Gray Reunion" featured parades, re-enactments, and speeches from a host of dignitaries, including President Woodrow Wilson, the first Southerner elected to the White House since the War. James Heflin of Alabama gave the main address. Heflin was a noted orator; his choice as Memorial Day speaker was criticized, as he was opposed for his support of segregation; however, his speech was moderate in tone and stressed national unity and goodwill, gaining him praise from newspapers.

In 1915, following the Second Battle of Ypres, Lieutenant Colonel John McCrae, a physician with the Canadian Expeditionary Force, wrote the poem, "In Flanders Fields". Its opening lines refer to the fields of poppies that grew among the soldiers' graves in Flanders.

In 1918, inspired by the poem, YWCA worker Moina Michael attended a YWCA Overseas War Secretaries' conference wearing a silk poppy pinned to her coat and distributed over two dozen more to others present. In 1920, the National American Legion adopted it as their official symbol of remembrance.

On May 26, 1966, President Lyndon B. Johnson designated an "official" birthplace of the holiday by signing the presidential proclamation naming Waterloo, New York, as the holder of the title. This action followed House Concurrent Resolution 587, in which the 89th Congress had officially recognized that the patriotic tradition of observing Memorial Day had begun one hundred years prior in Waterloo, New York. The village credits druggist Henry C. Welles and county clerk John B. Murray as the founders of the holiday. Scholars have determined that the Waterloo account is a myth. Snopes and Live Science also discredit the Waterloo account.

In 2000, Congress passed the National Moment of Remembrance Act, asking people to stop and remember at 3:00 pm.

Memorial Day endures as a holiday which most businesses observe because it marks the unofficial beginning of summer. The Veterans of Foreign Wars (VFW) and Sons of Union Veterans of the Civil War (SUVCW) advocated returning to the original date. The VFW stated in 2002:

The history of Memorial Day in the United States is complex. The U.S. Department of Veterans' Affairs recognizes that approximately 25 places claim to have originated the holiday. At Columbus [Georgia] State University there is a Center for Memorial Day Research, and the University of Mississippi incorporates a Center for Civil War Research that has also led research into Memorial Day's origins. The practice of decorating soldiers' graves with flowers is an ancient custom. Soldiers' graves were decorated in the U.S. before and during the American Civil War. Many of the origination claims are myths, unsupported by evidence, while others are one-time cemetery dedications or funeral tributes. In 2014, one scholarly effort attempted to separate the myths and one-time events from the activities that actually led to the establishment of the federal holiday.