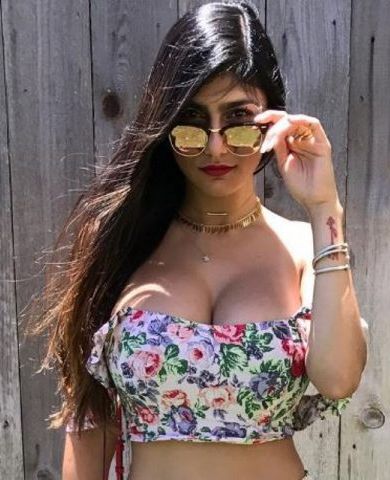 Born in Lebanon and raised Catholic in what she describes as a "very conservative" home, Khalifa attended a French-language private school in Beirut, where she also learned to speak English. She moved with her family to the United States in 2001, leaving their home in the wake of the South Lebanon conflict. After moving to the United States, her family lived in Montgomery County, Maryland, where she played lacrosse in high school. She has said she was bullied at school for being "the darkest and weirdest girl there", which intensified after the September 11 attacks. She attended Massanutten Military Academy in Woodstock, Virginia, and later graduated from the University of Texas at El Paso with a Bachelor of Arts in history. She supported herself while there by working as a bartender, model, and "briefcase girl" on a local Deal or No Deal-esque Spanish game show.

Khalifa married her high school boyfriend in February 2011. They separated in 2014 and divorced in 2016. In 2019 she married professional chef Robert Sandberg; they separated in 2020. As of 2022, she is in a relationship with musician Jhay Cortez.

Khalifa has a tattoo of the opening line of the National Anthem of Lebanon and another of the Lebanese Forces Cross. She got the latter after the October 2012 Beirut bombing, stating it was to "show solidarity with [her] father's political views." Both tattoos have come under scrutiny by her detractors. She has revealed that her parents stopped speaking to her because of her career choice. Her parents released a statement disassociating themselves from her actions and blaming her decision to enter the porn industry on her residence in a foreign country which had a different culture than theirs, and that her actions did not reflect her upbringing. They also said that they hoped that she would leave pornography, believing that her image did not honor her family or home country.

Khalifa entered the professional pornographic film industry in October 2014. Her stage name was taken from the name of her dog, Mia, and American rapper Wiz Khalifa.

She said in 2015 that she was no longer a practicing Catholic.

After three months working as an adult-film actor, Khalifa worked in Miami as a paralegal and bookkeeper. She transitioned into a career as a social media personality, webcam model, and sports commentator. She runs a YouTube channel; live streams on Twitch, and performed as a webcam model; sells photoshoots, merchandise, and access to exclusive content on membership website Patreon; and sold explicit photoshoots and videos on the social media website Findrow. Dan Steinberg of The Washington Post wrote in 2016 that, despite Khalifa's change of career, her social media feed was "still a bit more risqué than that of, say, Ben Bernanke."

In a July 2016 interview with The Washington Post, Khalifa stated that she had only performed in pornography for three months and had left the industry over a year before, changing to a "more normal job." She said, "I guess it was my rebellious phase. It wasn't really for me. I kind of smartened up and tried to distance myself from that." She said she continued to perform as a webcam model for Bang Bros for eleven months after she stopped shooting scenes before Complex Networks offered her to host a sports show. Carter Cruise, a former performer who became a disc jockey, criticized Khalifa for reinforcing the social stigma against sex work in distancing herself from her previous career.

In November 2016, an online petition called for Khalifa to be appointed by President-elect Donald Trump as the next United States Ambassador to Saudi Arabia.

She has used her social media presence to support professional sports teams from the Washington, D.C. area. She and Gilbert Arenas hosted Out of Bounds, a daily sports show on Complex News's YouTube channel, from October 2017 to February 2018. Afterwards, Khalifa co-hosted "Sportsball" alongside Tyler Coe on Rooster Teeth. Its final episode was released on October 30, 2018.

In 2018, the musical duo iLoveFriday released a diss track called "Mia Khalifa," in response to a fake tweet posted by a user impersonating Khalifa. The song became an internet meme after the "hit or miss" snippet gained popularity on the TikTok app. At the time, it was the most well-known viral TikTok meme in the Western world, and had been used in over four million TikTok videos.

In May 2020, she had a guest appearance as herself in the Hulu show Ramy.