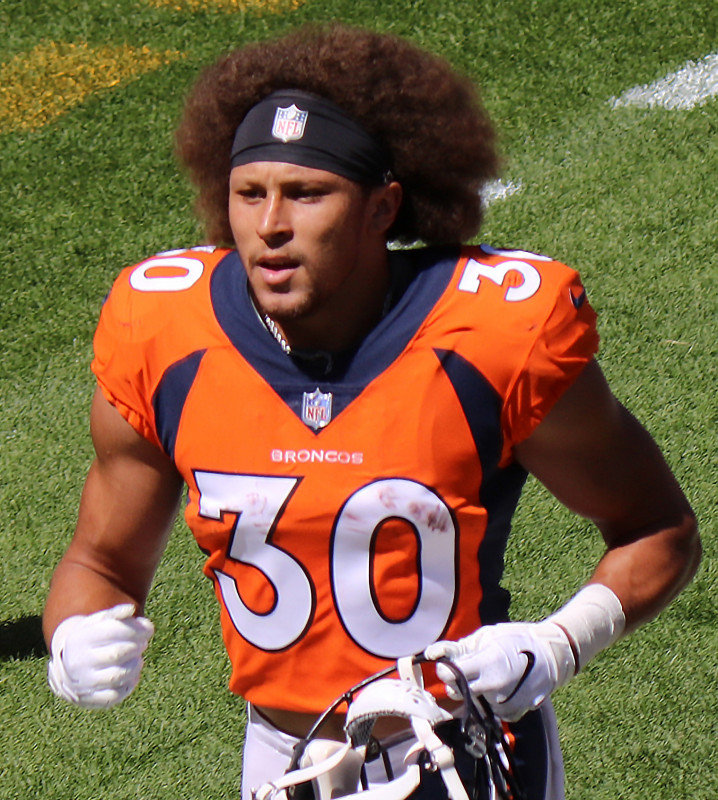 Lindsay, like his father Troy, played running back in high school. At South High School, Lindsay elected to wear the same jersey number as his father, 22. Playing for the Rebels, he chased the Denver Public School District record for rushing yards (4,400), which was set by his father in 1979. After a successful first three years of high school, Lindsay committed to playing for the University of Colorado Boulder. Shortly after surpassing his father's rushing record during his senior season, Lindsay suffered a severe ACL tear that brought an end to his high school career. Despite this injury, Mike MacIntyre, Colorado's coach, upheld the school's scholarship offer for the 2013 season. Apart from football, Lindsay also lettered in basketball as a freshman, and lettered all four years in track and field, where he ran sprints and relays and had personal bests of 10.9 seconds in the 100-meter dash, 22.2 in the 200 and 49.0 in the 400.

Phillip Lindsay (born July 24, 1994) is an American football running back who is a free agent. Lindsay was born in Denver, Colorado, grew up in Aurora, Colorado, and attended South High School in Denver where he became the school's all-time leading rusher with 4,587 yards. He played college football at the University of Colorado Boulder and set the school record in all-purpose yards (5,760) and yards from scrimmage (4,683). He was signed as an undrafted free agent by the Denver Broncos in 2018. Lindsay became the first undrafted offensive rookie to ever make the Pro Bowl.

During his senior season in 2017, he rushed for a career-high 281 yards against Arizona. During the 2017 regular season, he ranked ninth among all Division I FBS players with 1,474 rushing yards. Lindsay finished the 2017 season with the most rushing attempts (301) in Division I play. He was selected as a semifinalist for the Doak Walker Award for the nation's top running back.

Lindsay signed with the Denver Broncos as an undrafted free agent on May 1, 2018. He made the Broncos' final roster after an impressive preseason, and was named the No. 3 running back on the depth chart behind third-round rookie Royce Freeman and veteran Devontae Booker. In Week 1, against the Seattle Seahawks, he rushed for 71 yards on 15 carries and recorded two receptions for 31 yards and a receiving touchdown. The following week, in a 20–19 victory over the Oakland Raiders, Lindsay ran for 107 yards and had one reception for four yards. He became the first undrafted player in NFL history with 100+ scrimmage yards in each of their first two games. During Week 3 against the Baltimore Ravens, Lindsay was ejected for throwing punches after a fumble. He was held to 20 rushing yards as the Broncos lost 14–27. In Week 4, against the Kansas City Chiefs, Lindsay had 69 rushing yards and added another rushing touchdown. In Week 11, in a 23–22 victory over the Los Angeles Chargers, Lindsay recorded his first multi-rushing touchdown game. In a Week 12 victory over the Pittsburgh Steelers, he had a season-high 110 rushing yards and a rushing touchdown. In a Week 13 game against the Cincinnati Bengals, he rushed for a career-high 157 yards and two touchdowns, earning him the AFC Offensive Player of the Week award. On December 18, 2018, Lindsay was voted to his first Pro Bowl making him the first undrafted offensive rookie in NFL history to be voted to a Pro Bowl. On December 24, 2018, Lindsay, who injured his wrist against the Oakland Raiders, was placed on injured reserve ahead of the Broncos’ final season game. He finished his first season with 1,278 total yards (1,037 rushing yards, 241 receiving yards) from scrimmage and 10 touchdowns while splitting carries almost evenly with Royce Freeman. He was named to PFWA's All-Rookie Team, becoming the fourth Denver Broncos running back to receive this award, joining Bobby Humphrey (1989), Terrell Davis (1995), and Olandis Gary (1999). He was ranked 68th by his fellow players on the NFL Top 100 Players of 2019.

In Week 1 against the Tennessee Titans, Lindsay rushed for 24 yards before exiting the game with a toe injury. Without Lindsay, the Broncos lost the game 16–14. Lindsay made his return from injury in Week 6 against the New England Patriots. During the game, Lindsay rushed for 101 yards during the 18–12 win. In Week 8 against the Los Angeles Chargers, Lindsay rushed 6 times for 83 yards (13.8 yards per carry) and his first rushing touchdown of the season during the 31–30 win. On December 26, 2020, Lindsay was placed on injured reserve. He finished the season with 118 carries for 502 rushing yards and one rushing touchdown.

Lindsay signed with the Houston Texans on March 30, 2021. He entered the 2021 season as the third running back on the depth chart behind Mark Ingram II and David Johnson. He played in 10 games before being released on November 23, 2021.

On May 18, 2022, Lindsay signed with the Indianapolis Colts. He was released on August 30, 2022, but signed to the practice squad a week later. He was elevated to the active roster on October 6 for the Colts' week 5 game against the Denver Broncos due to an injury to starting running back Jonathan Taylor. On October 15, Lindsay was elevated to the active roster Lindsay was demoted to the practice squad on November 7, then released from the Colts organization on November 10, replaced by Jake Funk.