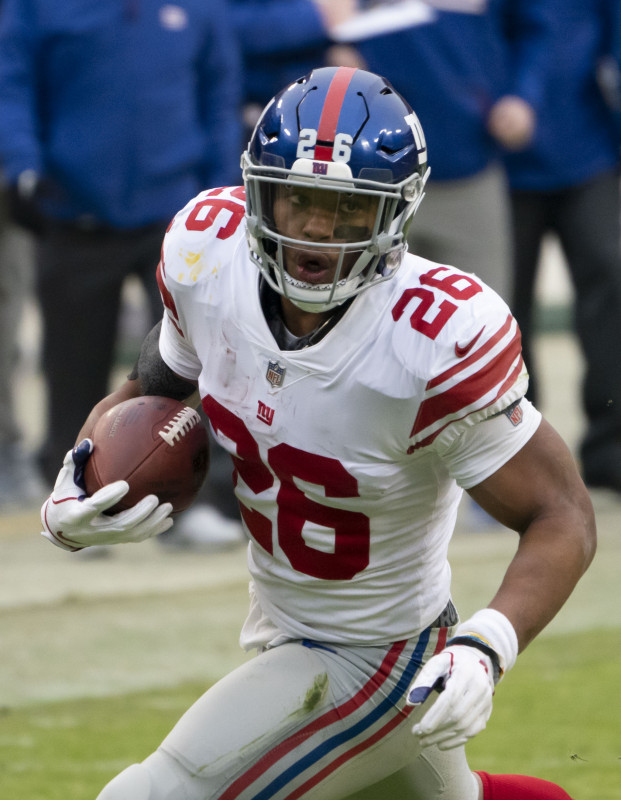 Barkley scored his first NFL touchdown, a 68-yard rush, in the season opener against the Jacksonville Jaguars. Overall, he had 106 rushing yards and a touchdown in the 20–15 loss. The following week, in a 20–13 loss to the Dallas Cowboys, Barkley set a Giants' franchise record for catches in a game, with 14. He also tied the NFL single game record for catches by a rookie. In Week 3, a 27–22 victory over the Houston Texans, he recorded 82 rushing yards, one rushing touchdown, and five receptions for 35 receiving yards. The following week, in a loss to the New Orleans Saints, he recorded another game with 100 scrimmage yards with 44 rushing yards and 56 receiving yards to go along with a rushing touchdown. In Week 5, against the Carolina Panthers, he recorded four receptions for 81 receiving yards and two receiving touchdowns to go along with 48 rushing yards in the 33–31 loss. During Thursday Night Football against the Philadelphia Eagles in Week 6, Barkley finished with 130 rushing yards, including a 50-yard touchdown, along with 99 receiving yards, totaling 229 all-purpose yards as the Giants lost 34–13. In Week 11 against the Tampa Bay Buccaneers, Barkley rushed for a career-high 142 yards and scored 3 touchdowns as the Giants won 38–35, and for his efforts he was named the NFC Offensive Player of the Week. In Week 12's 25–22 loss to the Philadelphia Eagles, Barkley rushed for 101 yards and scored a 51-yard touchdown, becoming the first player since John Fuqua in 1970 to rush for two 50-plus yard touchdowns against the Eagles in a single season. In Week 13 against the Chicago Bears, Barkley had 125 rushing yards and three receptions for 21 yards in the 30–27 overtime win. During Week 14, in the Giants' 40–16 win over the Washington Redskins, Barkley rushed for 170 yards, including a 78-yard touchdown, becoming the first Giants' rookie to surpass 1,000 rushing yards, and setting a franchise single-season record for rookies with 15 touchdowns. In the regular season finale against the Dallas Cowboys, he had 17 carries for 109 yards, his seventh game with over 100 rushing yards on the season, and a touchdown in the 36–35 loss. In recognition of his phenomenal, record-breaking rookie season, Barkley was elected to the 2019 Pro Bowl, where he helped the NFC win the Skills Showdown.

On December 31, 2017, Barkley, who was a projected top 10 pick by many, declared his intentions to enter the 2018 NFL Draft. In the weeks leading up to the NFL Combine Barkley's stock rose even higher. By late February, mock drafts projected him as the second pick selection overall, the highest for a running back since Reggie Bush in 2006. Mel Kiper Jr., who has history of being against drafting running backs in the first round, said “Barkley is a once in a lifetime talent, teams that pass on this young man will be sorry.” At the combine, Barkley had a widely praised performance, running a 4.40 sec 40-yard dash and pressing 225 pounds for 29 reps, tying for the most reps at the running back position. According to Ian Rapoport, the Cleveland Browns were "strongly considering" drafting Barkley first overall, which would have made him the first running back since Ki-Jana Carter in 1995 to go first overall.

Barkley earned immediate playing time as a true freshman at Penn State in 2015. After rushing for one yard on one carry during his first game, he rushed for 115 yards with a touchdown in his second game. He followed up that performance by rushing for 195 yards and 2 touchdowns on 21 carries in his third game. In October, he missed two games due to injury. In his first game back against #1 Ohio State, he rushed for 194 yards on 26 carries. During his first year, Barkley had 182 carries for 1,076 yards and seven touchdowns during the 2015 Penn State football season campaign.

On November 1, 2016, Barkley was named a semifinalist for the Maxwell Award. On November 5, Barkley rushed for 167 yards and one touchdown versus Iowa. He added 44 yards and another touchdown in the air, for a total of 211 all-purpose yards in the 41–14 win.

On December 3, 2016, Barkley had 19 carries for 83 yards, rushed for one touchdown, and caught another touchdown on a wheel route. His efforts helped Penn State recover from a 28–7 deficit to stun Wisconsin, 38–31, in the 2016 Big Ten Championship Game.

In the first Big Ten home game of his junior campaign against the Indiana Hoosiers, Barkley carried the ball 20 times for only 56 yards, an underwhelming rushing day for him. Despite this, he still had a major impact on the game, returning the opening kickoff 97 yards for a touchdown, adding 51 yards on 4 catches, and even throwing a 16-yard pass to DaeSean Hamilton late in the fourth quarter to cap off a 45–14 win. Barkley became the first player in Big Ten history to score a return and passing touchdown in the same game. For his efforts, Barkley was named Big Ten Special Teams Player of the Week. One month later against #6 Ohio State, Barkley again returned the opening kickoff back 97 yards for a touchdown, but was limited for the rest of the game to 44 yards rushing on 21 carries, 36 of which came on a TD run in the second quarter. In his final collegiate game, Barkley rushed for 137 yards and 2 touchdowns, one of them a 92-yard effort to put Penn State up 28-7 over the #11 Washington Huskies in the 2017 Fiesta Bowl, which Penn State would go on to win 35-28. On December 31, 2017, about 24 hours after the team's Fiesta Bowl victory, Barkley declared his intentions to enter the NFL draft.

As a rookie during the 2018 NFL season Barkley set numerous league and franchise records while on his way to a 1,300+ yard rushing season and a Pro Bowl nod. In 2018, Barkley set multiple league records, tying Randy Moss for most 50+ yard touchdowns from scrimmage in a season, along with recording the most receptions (91) by a rookie running back. Barkley also set three franchise records for rookies: most rushing touchdowns (11), most rushing yards (1,307), and most total touchdowns (15). Barkley was also awarded AP NFL Offensive Rookie of the Year, and was named to the first team PFWA All-Rookie Team.

On March 9, 2018, the Pennsylvania House Chamber voted in favor of making Wednesday, March 14 "Saquon Barkley Day" in Pennsylvania. Barkley attended the Pennsylvania State Capitol on March 14 and addressed the House. And on March 29, 15 days later Barkley and his family participated in a parade through his hometown of Coplay, Pennsylvania that included the Whitehall High School marching band and kids from the league where Barkley played youth football. The parade drew an estimated 5,000 parade-goers. City and parade officials said: "We wanted him to know he has his hometown behind him no matter where he goes.”

The New York Giants drafted Barkley as the second overall pick in the 2018 NFL Draft. On July 22, 2018, Barkley signed a four-year deal worth $31.2 million fully guaranteed featuring a $20.76 million signing bonus with $15 million of the bonus received immediately (remaining bonus received in October).