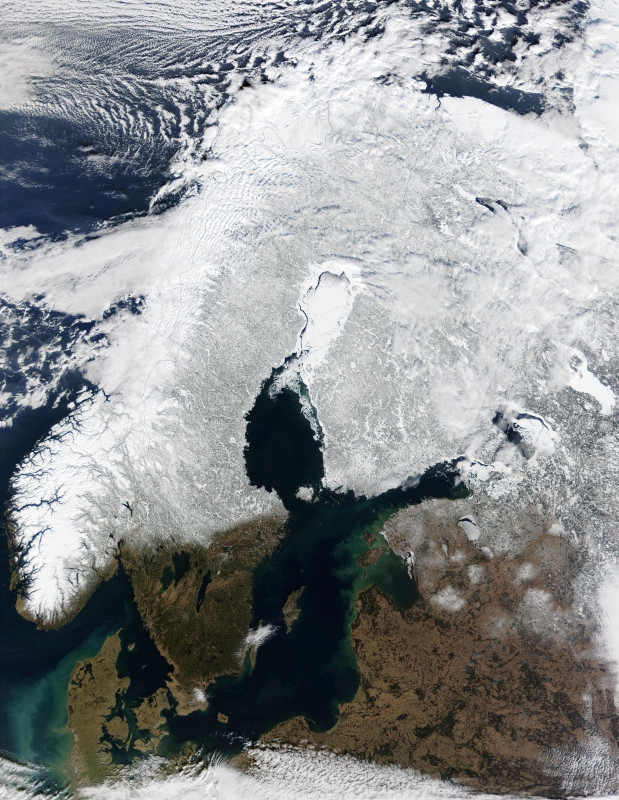 The Normans were descendants of those Vikings who had been given feudal overlordship of areas in northern France, namely the Duchy of Normandy, in the 10th century. In that respect, descendants of the Vikings continued to have an influence in northern Europe. Likewise, King Harold Godwinson, the last Anglo-Saxon king of England, had Danish ancestors. Two Vikings even ascended to the throne of England, with Sweyn Forkbeard claiming the English throne in 1013 until 1014 and his son Cnut the Great being king of England between 1016 and 1035.

The Viking Age in Scandinavian history is taken to have been the period from the earliest recorded raids by Norsemen in 793 until the Norman conquest of England in 1066. Vikings used the Norwegian Sea and Baltic Sea for sea routes to the south.

The kings of Norway continued to assert power in parts of northern Britain and Ireland, and raids continued into the 12th century, but the military ambitions of Scandinavian rulers were now directed toward new paths. In 1107, Sigurd I of Norway sailed for the eastern Mediterranean with Norwegian crusaders to fight for the newly established Kingdom of Jerusalem; the kings of Denmark and Sweden participated actively in the Baltic Crusades of the 12th and 13th centuries.

Early modern publications, dealing with what is now called Viking culture, appeared in the 16th century, e.g. Historia de gentibus septentrionalibus (History of the northern people) of Olaus Magnus (1555), and the first edition of the 13th-century Gesta Danorum (Deeds of the Danes), by Saxo Grammaticus, in 1514. The pace of publication increased during the 17th century with Latin translations of the Edda (notably Peder Resen's Edda Islandorum of 1665).

In Scandinavia, the 17th-century Danish scholars Thomas Bartholin and Ole Worm and the Swede Olaus Rudbeck used runic inscriptions and Icelandic sagas as historical sources. An important early British contributor to the study of the Vikings was George Hickes, who published his Linguarum vett. septentrionalium thesaurus (Dictionary of the Old Northern Languages) in 1703–05. During the 18th century, British interest and enthusiasm for Iceland and early Scandinavian culture grew dramatically, expressed in English translations of Old Norse texts and in original poems that extolled the supposed Viking virtues.

Historians therefore believe that Viking warriors did not wear horned helmets; whether such helmets were used in Scandinavian culture for other, ritual purposes, remains unproven. The general misconception that Viking warriors wore horned helmets was partly promulgated by the 19th-century enthusiasts of Götiska Förbundet, founded in 1811 in Stockholm. They promoted the use of Norse mythology as the subject of high art and other ethnological and moral aims.

In 1962, American comic book writer Stan Lee and his brother Larry Lieber, together with Jack Kirby, created the Marvel Comics superhero Thor, which they based on the Norse god of the same name. The character is featured in the 2011 Marvel Studios film Thor and its sequels. The character also appears in the 2012 film The Avengers and its associated animated series.

Other vessels, often replicas of the Gokstad ship (full- or half-scale) or Skuldelev have been built and tested as well. The Snorri (a Skuldelev I Knarr), was sailed from Greenland to Newfoundland in 1998.

Led by the operas of German composer Richard Wagner, such as Der Ring des Nibelungen, Vikings and the Romanticist Viking Revival have inspired many creative works. These have included novels directly based on historical events, such as Frans Gunnar Bengtsson's The Long Ships (which was also released as a 1963 film), and historical fantasies such as the film The Vikings, Michael Crichton's Eaters of the Dead (movie version called The 13th Warrior), and the comedy film Erik the Viking. The vampire Eric Northman, in the HBO TV series True Blood, was a Viking prince before being turned into a vampire. Vikings appear in several books by the Danish American writer Poul Anderson, while British explorer, historian, and writer Tim Severin authored a trilogy of novels in 2005 about a young Viking adventurer Thorgils Leifsson, who travels around the world.

On 1 July 2007, the reconstructed Viking ship Skuldelev 2, renamed Sea Stallion, began a journey from Roskilde to Dublin. The remains of that ship and four others were discovered during a 1962 excavation in the Roskilde Fjord. Tree-ring analysis has shown the ship was built of oak in the vicinity of Dublin in about 1042. Seventy multi-national crew members sailed the ship back to its home, and Sea Stallion arrived outside Dublin's Custom House on 14 August 2007. The purpose of the voyage was to test and document the seaworthiness, speed, and manoeuvrability of the ship on the rough open sea and in coastal waters with treacherous currents. The crew tested how the long, narrow, flexible hull withstood the tough ocean waves. The expedition also provided valuable new information on Viking longships and society. The ship was built using Viking tools, materials, and much the same methods as the original ship.

In 2019, archaeologists uncovered two Viking boat graves in Gamla Uppsala. They also discovered that one of the boats still holds the remains of a man, a dog, and a horse, along with other items. This has shed light on death rituals of Viking communities in the region.