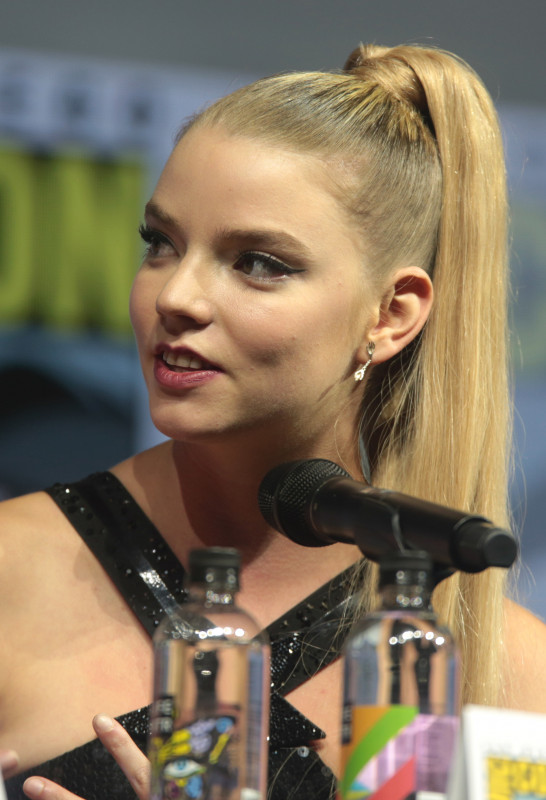 The following year, Taylor-Joy starred in Luke Scott's science fiction horror film Morgan, playing the title character. It received negative reviews and was a commercial failure, but Booth Michigan's John Serba wrote that "Taylor-Joy disarms us with a performance that keenly teeter-totters between little-girl innocent and dead-eyed viciousness." She next starred in the drama film Barry, which focused on a young Barack Obama during his first year at Columbia University in 1981; it premiered at the 2016 Toronto International Film Festival. The same year, Taylor-Joy's likeness was licensed from Storm Management to represent the character of Valkyrie Cain on the tenth anniversary book cover of Skulduggery Pleasant, and subsequently the covers of the seventh, eighth, ninth, and fourteenth books in the series, before she appeared in the music video for Skrillex's remix of GTA's song "Red Lips".

Anya-Josephine Marie Taylor-Joy (/ˈænjə/ ANN-yə; born 16 April 1996) is an actress. She has won several accolades, including a Golden Globe Award and a Screen Actors Guild Award, in addition to a nomination for a Primetime Emmy Award. In 2021, she was featured on Time magazine's 100 Next list.

Taylor-Joy was born on 16 April 1996 in Miami, Florida, to Dennis Alan Taylor, a former banker, and Jennifer Marina Joy, a psychologist. She has stated that her birth in Miami was a "fluke", since her parents had been holidaying in the city at the time; because of her birthplace, she holds American citizenship due to the country's jus soli nationality law. Her father is an Argentine of English and Scottish descent, the son of a British father and an Anglo-Argentine mother. Her mother was born in Zambia to an English diplomat father, David Joy, and a Spanish mother from Barcelona. She is the youngest of six siblings, four of whom are from her father's previous marriage.

In 2016, she was cast opposite James McAvoy in M. Night Shyamalan's Split, where she played Casey Cooke, a teenage girl abducted by a man with multiple personalities (McAvoy). It was a commercial success, grossing $278.5 million on a budget of $9 million. Her next film that year was Cory Finley's directorial debut Thoroughbreds. It co-starred Olivia Cooke and Anton Yelchin in his final film role. Taylor-Joy played Lily, a high-school student who schemes to kill her stepfather via a contract with a drug dealer. It premiered at the 2017 Sundance Film Festival; David Ehrlich of IndieWire called her performance "captivating". Her third release in 2017 was Sergio G. Sánchez's horror mystery Marrowbone, whose ensemble cast critics praised; Tasha Robinson of The Verge wrote that Taylor-Joy brought "a shy, appealing warmth" to an inconsistent character. Taylor-Joy was nominated for the BAFTA Rising Star Award and was awarded the Trophée Chopard at the Cannes Film Festival that year. In December 2017, she portrayed Petronella Oortman in the BBC One period drama miniseries The Miniaturist, based on Jessie Burton's novel of the same name.

The Hollywood Reporter named Taylor-Joy on their list of 2016 Hollywood's Rising Stars 35 and Under, and she was included in a similar list compiled by W magazine in 2017. In 2019, she appeared on the annual Forbes 30 Under 30 list, a compilation of "the brightest young entrepreneurs, innovators and game changers in the world". In 2020, she was named "Breakthrough Entertainer" of the Year by the Associated Press and "Breakout Star of 2020" by the New York Post. In 2021, Time magazine included Taylor-Joy on its 100 Next list of "emerging leaders who are shaping the future", with a tribute written by former World Chess Champion Garry Kasparov.

In 2020, Taylor-Joy starred as Emma Woodhouse in Autumn de Wilde's directorial debut Emma, an adaptation of Jane Austen's 1815 novel of the same name. Reviewing the film, Peter Travers of Rolling Stone deemed Taylor-Joy "incandescent". Taylor-Joy also portrayed Illyana Rasputin/Magik, a Russian mutant and sorceress, in the superhero horror film The New Mutants. It was originally intended for release in April 2018 but experienced several delays; it was released in 2020.

In 2020, she next appeared in the drama film Here Are the Young Men, directed by Eoin Macken and based on the novel of the same name by Rob Doyle. In 2021, she starred in Edgar Wright's psychological horror film Last Night in Soho. In the film, she performed a version of the Petula Clark song, "Downtown"; a music video of Taylor-Joy performing the song out of character in a recording studio was released to coincide with the film's release.

Taylor-Joy has since appeared in the fifth and sixth seasons of the television drama Peaky Blinders (2019–2022), and played Emma Woodhouse in the period drama Emma (2020), which gained her a Golden Globe nomination. Also in 2020, she received critical acclaim for her performance as chess prodigy Beth Harmon in the Netflix miniseries The Queen's Gambit, winning a Golden Globe and a Screen Actors Guild Award. Taylor-Joy has since starred in the 2022 films The Northman and The Menu.

In 2022, Taylor-Joy re-teamed with filmmaker Robert Eggers for a starring role in the historical epic The Northman, which was described as “a Viking revenge saga set in Iceland at the turn of the 10th century”. The film was released to a positive critical reception. She had a small role in David O. Russell’s ensemble period comedy Amsterdam, which received poor critical reception and box office. Released the following month was Mark Mylod’s The Menu, in which Taylor-Joy starred opposite Nicholas Hoult.