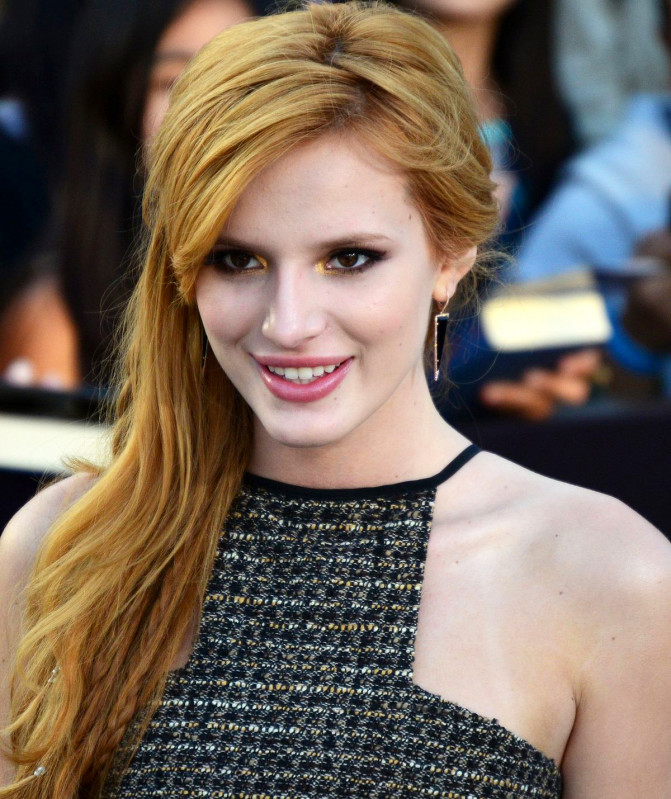 Thorne was born in the Miami suburb of Pembroke Pines, Florida, to Tamara Thorne (née Beckett) and Delancey Reinaldo "Rey" Thorne. She has three siblings who are also actors. Her father, who was Cuban, died in 2007 in a traffic accident. On her maternal side Thorne is of mostly Italian ancestry, with some Irish, English, Welsh, and German. Thorne has said that she was raised by a single mother who was supporting four children, and that they were very poor, which is why she worked as a child actress, to help support the family.

Thorne's first film appearance was an uncredited role as a sidelines fan in the 2003 film Stuck on You. She has since appeared in film and television projects including Entourage and The O.C. as a younger version of Taylor Townsend. In 2007, she joined the recurring cast of Dirty Sexy Money's second season, her first major television role. She played Margaux Darling. The series revolves around lawyer and family man Nick George when Nick's father mysteriously dies in a plane crash, he agrees to take his position as the Darling family's lawyer, while trying to discover who committed the murder. In 2008, Thorne starred alongside Christian Slater and Taylor Lautner in the short-lived drama series My Own Worst Enemy, for which she won a Young Artist's Award for her portrayal of the character Ruthy Spivey; Thorne described her Enemy casting as a major breakthrough as this was the first recurring role in her career. That same year, she starred in the third-last episode of October Road as Angela Ferilli, the pre-adolescence crush of the main characters. Her older brother Remy also guest-starred in the same episode as a younger Eddie Latekka.

In 2009, she starred the web series Little Monk, which depicted characters from the series Monk, as Wendy, one of Monk's classmates. The webisodes are available only on the "Best of Monk" DVD. Also in 2009, she played the role of the vengeful antagonist in the horror film Forget Me Not. Thorne took on a supporting role in the family drama Raspberry Magic, the movie premiered at the Cinequest Film Festival and the San Francisco International Asian American Film Festival in 2010.

In 2010, Thorne replaced Jolean Wejbe as Tancy "Teenie" Henrickson, Bill and Barb's younger daughter in Season 4 of HBO's Big Love. Thorne co-starred on the Disney Channel sitcom Shake It Up, originally titled Dance, Dance Chicago. Thorne played CeCe Jones, a dancer with heavy ambitions for a career in the spotlight despite having dyslexia. The show is a buddy comedy centered on a teen dance show (in a show-within-a-show format) co-starring Thorne and Zendaya. The multi-camera series began production in Hollywood, California, in July 2010 and premiered on November 7, 2010, on Disney Channel. While she had a substantial portfolio of work in television and film, Thorne had no experience in professional dancing before being cast. After signing onto the show in October 2009, she began taking three dance classes every night. Thorne's first single, Watch Me was released on June 21, reaching 86 on the US Billboard Hot 100 charts, 9 on the US Top Heatseekers charts and earning RIAA: Gold. On September 29, 2011, Disney Channel announced it had increased Shake It Up's second season order to 26 episodes. A 90-minute special episode Made In Japan aired August 17, 2012, as the season two finale.

Thorne was diagnosed with dyslexia in first grade. She was home-schooled after previously attending a public school, where she had been bullied. She improved in her learning after attending a Sylvan Learning center and began reading and writing a grade ahead. In an April 2010 interview with American Cheerleader magazine, she said she overcame dyslexia by rigorously reading everything she could find, including cereal box labels.

On June 4, 2012, Disney Channel announced that Shake It Up had been renewed for a third season. In 2012, Thorne was cast as Avalon Greene in the Disney Channel Original Movie Frenemies. TTYLXOX was released on March 6, reaching 97 on the US Billboard Hot 100 charts. On March 30, 2013, it was confirmed by Hollywood Records via Twitter that Thorne had officially signed to the record label. On July 25, 2013, the Disney Channel confirmed that Shake It Up would be canceled after the end of the third season. On April 23, 2013, Thorne announced her debut album with eleven songs. Thorne spoke about the album, saying "What fans can expect is [for it] just to be very different from anyone because I don't like to be one of those artists where you can be like: 'Oh yeah, I know them from that song.' All my songs are very different from each other. So I don't want to be known as only one genre." Thorne cited Britney Spears, Kesha, and Destiny's Child as influences for the album.

In 2014, Thorne co-starred in the comedy Blended, as Adam Sandler's character's daughter. She also co-starred in the films Alexander and the Terrible, Horrible, No Good, Very Bad Day (2014) and The DUFF (2015), playing high school antagonists. On July 30, Thorne was cast in an episode of the fifteenth season of the CSI: Crime Scene Investigation. The episode, "The Book of Shadows", aired October 19, 2014. Thorne appeared in the sequel to Mostly Ghostly (2008), titled Mostly Ghostly: Have You Met My Ghoulfriend (2014) as Cammy Cahill. On October 15, Thorne revealed her debut album was canceled, saying she wasn't happy with the "auto-tuned bad music" she had in the works. She released an EP, Jersey, on November 17. The lead single from the EP, "Call It Whatever", debuted in the Billboard Hot Dance Club Songs chart at number forty-seven, eventually rising to number ten, spending a total of ten weeks on the chart.

Also in 2015, she appeared as Ashley, a young and famous singer in Alvin and the Chipmunks: The Road Chip. In 2016, Thorne played Rain in Tyler Perry's Boo! A Madea Halloween.

It was reported that Thorne had signed a new deal to write a series of books, beginning with her first novel, Autumn Falls. Thorne has signed on as one of the leads in Manis Film's thriller Big Sky; Thorne plays Hazel. On December 12, Thorne was cast in the MTV series Scream, which is a television adaptation based on the original slasher film series Scream. Thorne was offered the lead role of the series but felt that the role of the "mean, terrible Nina" would be more iconic. In 2015, Thorne was cast in the animated U.S. dub of the film The Frog Kingdom, portraying the role of Frog Princess. The film is scheduled to be released on video on demand and on DVD beginning on June 30, 2015, by Lionsgate Home Entertainment.

Thorne began dating English actor Gregg Sulkin in 2015, however the relationship ended in August 2016. In August 2016, Thorne came out initially as bisexual. She was in a polyamorous relationship with both musician Mod Sun and internet personality Tana Mongeau, dating Mongeau from September 2017 to February 2019. Since April 2019, Thorne has been in a relationship with Italian singer Benjamin Mascolo of pop duo Benji & Fede. In July 2019, Thorne eventually identified herself as pansexual.

On June 1, 2015, it was announced that Thorne would star in the AwesomenessTV film Shovel Buddies, playing the role of Kate, the movie was released on iTunes in October 11, 2016. She will also play Jamie, a disillusioned teenager intensely guarding a personal secret, in the film Keep Watching.

In 2017, Thorne went back to television with a drama series Famous in Love, airing on Freeform, in which she played Paige Townsen, an ordinary college student who gets her big break after auditioning for the starring role in a Hollywood blockbuster. In March 2017, Thorne joined the cast of the black comedy film, Assassination Nation which was released in theaters on September 21, 2018. In the same year, Thorne starred in the Netflix original film, You Get Me. In October of that year, Thorne appeared in the slasher comedy The Babysitter, directed by McG and released directly to Netflix.

In a September 2017 appearance on Chelsea, Thorne told Chelsea Handler that she was bullied growing up because she was dyslexic, lived in a suburban area and spoke Spanish as her native language.

In January 2018, Thorne said she had been sexually abused from a young age until she was 14. She did not identify her abuser.

Thorne stars in the romantic drama Midnight Sun, based on the 2006 Japanese film of the same name. The film was released on March 23, 2018.

In August 2018, it was revealed that Thorne has officially returned to music and signed to Epic Records and began work on her debut album titled, What Do You See Now?, which is expected to release in sometime in 2019.

In February 2019, it was announced that Thorne will star alongside Jake Manley in the upcoming heist thriller film Southland.

In May 2019, it was reported that Thorne was cast in the science-fiction horror film, The Friendship Game.

In June 2019, Thorne had intimate photos of herself hacked and was subsequently threatened with extortion by the hackers, leading her to release the photographs publicly. More generally she has (in October) addressed the issue of pornographic deep fakes.