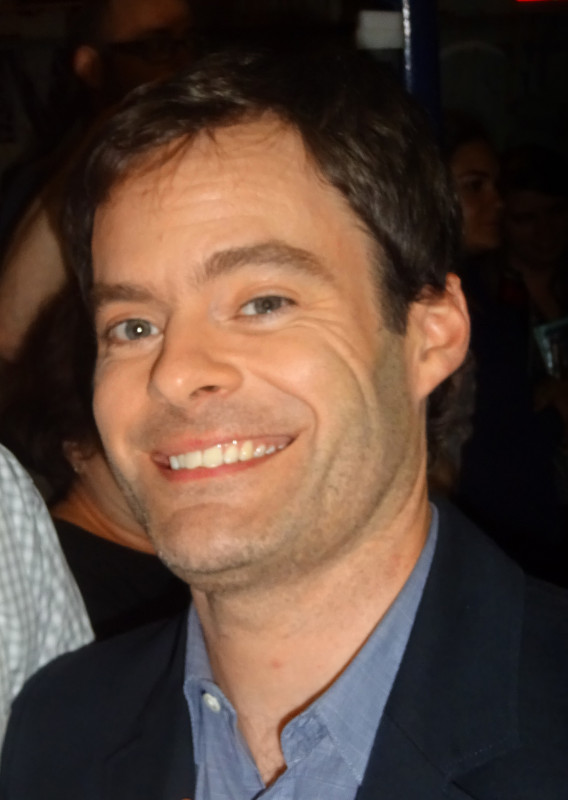 Hader was born in Tulsa, Oklahoma, on June 7, 1978, the son of dance teacher Sherri Renee (née Patton) and air cargo company owner, restaurant manager, truck driver, and occasional stand-up comedian William Thomas Hader Sr. He has two younger sisters named Katie and Kara. His ancestry includes Danish, English, German, and Irish, and he discovered in a 2016 episode of Finding Your Roots that he is a descendant of royal figures such as Charlemagne, Charles Martel and King Edward I. Hader attended Patrick Henry Elementary School, Edison Junior High, and Cascia Hall Preparatory School. He grew up with writer Duffy Boudreau, with whom he would later collaborate. He says he "had a hard time focusing in class" and "was always joking around". With a feeling of not fitting in, he filled his time watching movies and reading. He appreciated Monty Python, British comedy, and the films of Woody Allen and Mel Brooks, originally being shown many of these by his father. He made short films with friends and starred in a school production of The Glass Menagerie. He was unable to gain admission to top film schools because of his "abysmal" grades, so he instead enrolled at The Art Institute of Phoenix, and later Scottsdale Community College. His first job was as a Christmas tree salesman. He also worked as an usher at a Tempe cinema, which allowed him to see films for free, but he was fired for spoiling the ending of Titanic (1997) for unruly viewers. At Scottsdale Community College, he met Nicholas Jasenovec, who later directed Paper Heart (2009).

William Thomas Hader Jr. (born June 7, 1978) is an American actor, comedian, filmmaker, and impressionist. He is the creator, producer, writer, director, and star of the HBO dark comedy series Barry (2018–present), for which he has been nominated for eight Emmy Awards, winning two.

Hader was hired as a featured player and made his debut on the show on October 1, 2005. His first role was as a psychologist giving his views about life and death during the emergency landing of JetBlue Airways Flight 292. He felt he had gone from "preschool to Harvard." He became the "impressions guy", hoping to fill a utility-player role "like his hero Phil Hartman". Hader has said that he performed impersonations of teachers and friends when he was growing up but did not do impersonations of famous people until his Saturday Night Live audition. His list of impressions includes Vincent Price in the Variety Vault sketches, Keith Morrison, Harvey Fierstein, Al Pacino, Rick Perry, John Malkovich, James Carville, Julian Assange, Eliot Spitzer, Alan Alda, Clint Eastwood, and Charlie Sheen. On July 19, 2012, Hader received his first nomination for a Primetime Emmy Award for Outstanding Supporting Actor in a Comedy Series for his work on SNL. He is the first male SNL cast member to receive this nomination since Eddie Murphy in 1984.

Hader's aspirations of becoming a filmmaker eventually led him to drop out of college and move to Los Angeles in 1999. His parents were supportive of his decision and allowed him to use the money they had saved up for his education to cover his living expenses in Los Angeles. He found work as a production assistant (PA) while scouring the back pages of The Hollywood Reporter, and hoped to advance far enough to become an assistant director. He spent much of his life as a young man "lonely and underemployed" and filled large amounts of his time by watching movies. He regularly worked 18-hour days as a PA, having little time to pursue his creative ambitions. He worked as a PA on the documentary Empire of Dreams: The Story of the Star Wars Trilogy (2004) and the feature films James Dean (2001), Spider-Man (2002), and Collateral Damage (2002). He also worked as a post-production assistant on the VH1 reality show The Surreal Life (2003–2006). He briefly worked as a PA and stage manager on Playboy TV's sexual fantasy show Night Calls, but soon quit as he feared it would disappoint his parents. He eventually quit being a PA altogether after a bad experience while shooting The Scorpion King (2002).

Hader subsequently secured a job working as a night-time assistant editor at the post-production facility Triage Entertainment. He invested money into his own short film, but was too embarrassed to release it. Shortly thereafter, he and his then-longtime girlfriend broke up. Desperate for a change, he began attending comedy classes with friends at improvisational comedy enterprise the Second City in March 2003. He quickly realized that comedy was the creative outlet that he had needed since he decided to leave higher education behind, and soon Hader, his new compatriot in comedy Matt Offerman, and their two friends and fellow humor enthusiasts Eric Filipkowski and Mel Cowan, elected to form their own sketch comedy group. Christening their group Animals from the Future, the four frequently appeared to small audiences at backyard shows in Van Nuys. Matt's brother, actor Nick Offerman, told his wife, Megan Mullally, about the group. After attending one of the group's backyard appearances, Mullally told Hader of her intention to discuss him with Lorne Michaels of Saturday Night Live (SNL). As a result of Mullally's recommendation, Hader was asked to audition for the show and he soon flew to New York to audition for a group of SNL producers. Hader had no impressions prepared when he was invited to audition. He was nervous and struggled to display his strengths during the audition. This resulted in his spontaneous imitation of an Italian man he had once overheard. The impression would later become the first of Hader's many recurring characters on the show: Vinny Vedecci. As a result of the audition, Hader got an agent and manager. Just before he was officially invited to begin work on SNL, Hader was working as an assistant editor on Iron Chef America.

Hader married writer and director Maggie Carey in 2006; they have three daughters together. They announced their separation in November 2017, with Hader filing for divorce that December. The uncontested divorce reached a settlement in March 2018, and was finalized three months later.

After his film debut You, Me and Dupree (2006), Hader had a wide range of roles in 2007, such as Katherine Heigl's character's editor at E! in Knocked Up, the acid-taking mechanic Dave in Hot Rod alongside SNL castmate Andy Samberg, a recumbent biker in The Brothers Solomon (which featured SNL castmate Will Forte in one of the film's co-leading roles) and, most famously, as Officer Slater in the Judd Apatow produced Superbad. His role in Superbad helped boost his public awareness and allowed him to appear on mainstream programs like Total Request Live, The Tonight Show, and MTV's Video Music Awards.

In 2008, Hader starred in, and cowrote with Simon Rich, the web series The Line on Crackle. Hader lent his voice to the audiobook of Sarah Vowell's The Wordy Shipmates. Also in 2008, Hader appeared on Tim and Eric Awesome Show impersonating the recurring character James Quall on the episode "Jazz". He appeared in two other Apatow projects: Forgetting Sarah Marshall and Pineapple Express. He also starred alongside Ben Stiller, Robert Downey, Jr. and Tom Cruise in the action comedy Tropic Thunder. Hader re-teamed with Superbad director Greg Mottola in the comedy films Adventureland (2009) and Paul (2011). He lent his voice to his first video game role in Grand Theft Auto IV, which also featured his SNL castmates Jason Sudeikis and Fred Armisen.

Hader and SNL castmate Seth Meyers penned a Spider-Man one-off entitled The Short Halloween. It was illustrated by Kevin Maguire and came out May 29, 2009. It was given three and a half out of five stars by Benjamin Birdie of Comic Book Resources. He made a small appearance in the 2009 comedy film Year One, with Jack Black and Michael Cera. Hader lent his voice to the Sony Pictures Animation film Cloudy with a Chance of Meatballs, as well as its 2013 sequel, playing the lead role of Flint Lockwood as well as his invention in the films, the FLDSMDFR. He voiced a gazelle in Ice Age: Dawn of the Dinosaurs and appeared in the fantasy film Night at the Museum: Battle of the Smithsonian as Major General George Armstrong Custer. In April 2009, Hader was a part of Vanity Fair's list of "Comedy's New Legends".

Hader took on the voice role of Professor Impossible on the fourth season of The Venture Brothers (2010–2013), a part originated by Stephen Colbert. He voiced the Pod in the Aqua Teen Hunger Force episode "IAMAPOD", as well as Hitler in the episode "Der Inflatable Fuhrer". Hader played Kevin, Matt Damon's copilot, in the live episode of 30 Rock, recorded October 14, 2010. He portrayed "The Voice" in the action-comedy film Scott Pilgrim vs. the World (2010), the disembodied voice that pops up during certain moments of the film's video game-inspired fight scenes. He also had a small cameo as the voice of the USS Vengeance computer in the science fiction film Star Trek Into Darkness (2013).

Hader was the guest star in the series premiere of the comedy series The Mindy Project, where he played as Mindy's ex-boyfriend Tom McDougall. His character returned later in the first season. Hader voiced Dr. Malocchio in the Hulu animated comedy series The Awesomes. In 2013, Hader replaced Robert Downey, Jr., as the voice of Mr. Peanut. He has a severe peanut allergy.

Hader decided to leave SNL after eight seasons, informing cast and crew of his decision in February 2013. He came to the conclusion that he needed to leave when his then-wife and he were constantly having to travel to Los Angeles for work, which made it difficult for their children. His final episode was on May 18, 2013. "It was a hard decision, but it has to happen at some point," he told reporters. "It got to a point where I said, 'Maybe it's just time to go.'" On October 11, 2014, Hader returned as host with musical guest Hozier and on March 17, 2018, with musical guest Arcade Fire.

Hader starred in a dramatic role in the 2014 film The Skeleton Twins, opposite Kristen Wiig, with whom he worked on Saturday Night Live. The film won for 'Best Screenplay' at the Sundance Film Festival. In 2015, Hader voiced the character of Fear in the Disney-Pixar film Inside Out, and was attached to voice a dinosaur in the Pixar film The Good Dinosaur. However, Hader, alongside John Lithgow, Lucas Neff, Neil Patrick Harris, and Judy Greer, left the project after their characters were redesigned.

In 2015, Hader appeared in Brooklyn Nine-Nine as the captain of the 99th Precinct. Also in 2015, Hader reunited with fellow SNL alumni Fred Armisen and Seth Meyers for the IFC mockumentary series Documentary Now!, wherein he was an actor and a writer.

In December 2015, Drew McWeeny of HitFix reported that the voice of BB-8 was supplied by Hader and Ben Schwartz, both credited as "BB-8 vocal consultants" in the film. The voice was created by Abrams manipulating their voices through a talkbox, attached to an iPad running a sound-effects app. Hader also voiced multiple characters in YouTube channel Bad Lip Reading's parodies of the Star Wars original trilogy. Hader also played a minor supporting role in The Lonely Island's 2016 film Popstar: Never Stop Never Stopping, produced by Judd Apatow.

In 2019, Hader began dating actress Rachel Bilson, with whom he had co-starred in The To Do List. The couple made their first appearance at the 77th Golden Globe Awards in 2020, and it was reported that they had ended their relationship in July 2020.

In 2019, Hader starred in the supernatural horror film It: Chapter Two as Richie Tozier (sharing the role with Finn Wolfhard), alongside Jessica Chastain, Bill Skarsgård, Isaiah Mustafa, Jay Ryan, James Ransone, and James McAvoy. Hader received acclaim for his performance. In 2019, he voiced Leonard in The Angry Birds Movie 2, Axel the Carnie in Toy Story 4, The Wanderer in 4 episodes of The Dark Crystal: Age of Resistance, and played Nick Kringle in Noelle.

Hader began dating actress Anna Kendrick in late 2020 or early 2021. It was reported on June 28, 2022 that they had ended their relationship.