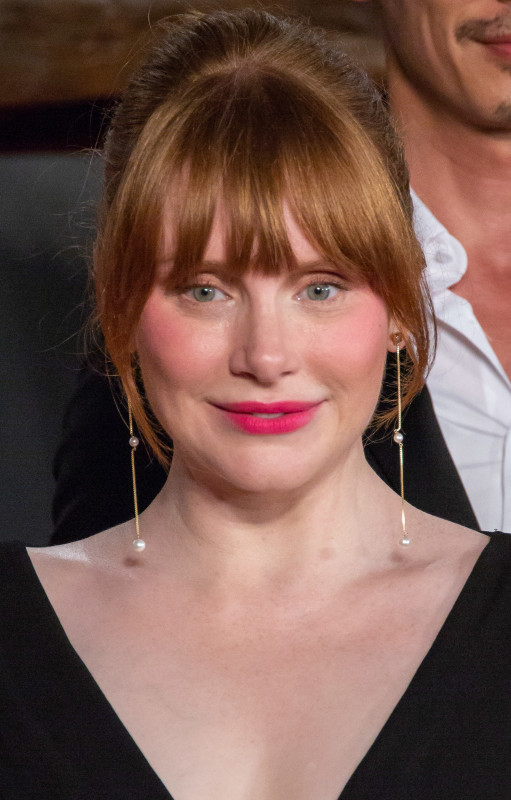 Howard appeared in Clint Eastwood's Hereafter (2010) as a love interest of Matt Damon's character. Empire referred to her character as "twinkly", and stated Howard's and Damon's "fine work" uplift the film. Hereafter was a commercial hit but critics gave it a mixed reception. In January 2011, Howard became the first celebrity ambassador for designer Kate Spade. She appeared in Tate Taylor's 2011 film adaptation of Kathryn Stockett's novel The Help, in which she played Hilly Holbrook, a racist socialite who leads a Junior League chapter in 1963 Jackson, Mississippi. The film was a critical and commercial success. The Miami Herald described her role as a "broadly comic villain" while The New York Times praised Howard for being "energetic in a thankless role". Howard was nominated for numerous accolades, including an MTV Movie Award and a NAACP Image Award, winning a Critics' Choice Award and a Screen Actors Guild Award alongside the rest of the cast.

Bryce Dallas Howard (born March 2, 1981) is an American actress and director. Howard was born in Los Angeles and attended New York University's Tisch School of the Arts, initially leaving in 2002 to take roles on Broadway but officially graduating in 2020. While portraying Rosalind in a 2003 production of As You Like It, Howard caught the attention of director M. Night Shyamalan, who cast her as the blind daughter of a local chief in the psychological thriller The Village (2004). She later starred in the title role of a naiad who escapes from a fantasy world in Shyamalan's fantasy thriller Lady in the Water (2006).

Bryce Dallas Howard was born March 2, 1981, in Los Angeles, California, to writer Cheryl Howard and actor-director Ron Howard. She has two younger sisters; twins Jocelyn and Paige, and a younger brother named Reed. Through her father, Bryce is a granddaughter of actors Rance Howard and Jean Speegle Howard, as well as a niece of actor Clint Howard. Her godfather is actor Henry Winkler, who co-starred with her father in the 1970s–1980s American comedy television series Happy Days.

Howard began training as an actor at Stagedoor Manor, a performing arts camp in upstate New York, alongside Natalie Portman. Howard attended Greenwich Country Day School until 1996, and graduated from Byram Hills High School in 1999, after which she studied for three years at New York University's (NYU) Tisch School of the Arts, taking classes at the Stella Adler Studio of Acting, the Experimental Theatre Wing, and the International Theatre Workshop in Amsterdam. During her schooling, Howard took part in the concept recording of the Broadway-bound musical A Tale of Two Cities. She took a leave of absence from NYU to pursue roles without completing her degree. Decades later, she returned to NYU and completed her degree in 2020.

For several years, Howard appeared in New York City theatrical productions; her repertoire included House & Garden–a 2002 Alan Ayckbourn production held at the Manhattan Theatre Club– and Tartuffe, a theatrical comedy staged at the American Airlines Theatre. In 2003, Howard performed as Rosalind in the William Shakespeare comedy As You Like It at The Public Theater, where she caught the attention of film director M. Night Shyamalan, who two weeks later and without an audition, later cast her in his fantasy thriller The Village (2004). Howard portrayed the female lead Ivy, the chief's blind daughter, opposite Ivy's love interest Joaquin Phoenix. The film was a commercial success but met mixed reviews. Her performance was lauded by critics and Howard was nominated for several awards. Lars von Trier then cast Howard to replace Nicole Kidman in Manderlay (2005), the sequel to Dogville (2003); she reprised Kidman's role as Grace Mulligan, an idealistic woman who stays at a plantation in rural Alabama and later attempts to assist a revolt against slave owners. The film garnered mixed reviews.

Howard met actor Seth Gabel at New York University; they dated for five years before marrying on June 17, 2006. Howard and Gabel had planned to start a family together in their thirties but a week after their wedding, Howard learned she was pregnant with their first child. Howard gave birth to their son Theodore, nicknamed Theo, in 2007. Howard has talked about experiencing postpartum depression 18 months after her son's birth, and credited her recovery to the help of a physician and a therapist. The couple had a second child, daughter Beatrice, in 2012. The family lives in upstate New York.

In 2007, Howard starred in her first blockbuster film, portraying Gwen Stacy in Spider-Man 3. Howard described herself as a "huge fan" of the franchise and did extensive research to prepare for the role, including reading comic books and dyeing her hair blonde for the part. Howard performed many of her own stunts while filming, unaware she was a few months into a pregnancy. The film was the highest-grossing installment of the trilogy and received a mixed reception. Howard then starred in Terminator Salvation (2009); she replaced Claire Danes in the role of Kate Connor. Howard described her role as "an emotional sounding board" for other characters. The film was a financial success but was not critically well received. The Guardian described Howard's role as "winsomely" while The New York Times wrote she "upholds the maternal side of the original Sarah Connor legacy".

In 2015, Howard starred opposite Chris Pratt, in the science-fiction action film Jurassic World, the fourth installment in the Jurassic Park franchise. She portrayed Claire Dearing, the ambitious, accomplished operations manager at the titular theme park who undergoes development during the film. Howard performed extensive ankle exercises to complete the scenes in which her character runs in high heels through almost three feet (0.91 m) of mud, which she described as "one of the hardest things [she's] ever had to do". Jurassic World was a commercial and critical success, with Howard's performance and on-screen chemistry with Pratt receiving praise. Rolling Stone described her portrayal as "dynamo" and "nobody's patsy" while the Associated Press wrote; "it is Howard who makes the biggest impact ... her transformation is the most convincing one in a film full of dubious evolutions". The Los Angeles Times and The Atlantic considered Dearing and her use of heels "sexist", while Bustle and Inquisitr labeled Howard's character as a "feminist hero". Howard disagreed with the former view, citing the character's detachment from reality and extensive familiarity with heels in everyday life.

In 2016, Howard starred in the fantasy adventure Pete's Dragon, a remake of the 1977 film of the same name. Pete's Dragon was released to critical and commercial success. The same year, Howard appeared in the crime drama Gold (2016) as Kay, the protagonist's girlfriend. Gold opened to a limited release with mixed reviews. The Hollywood Reporter dubbed her portrayal a "sturdy, salt-of-the-earth" type who "makes [a substantial] impression". That same year, she also appeared in "Nosedive", an episode of the Netflix anthology series Black Mirror. Howard gained 30 pounds for the role because body shaming is a "huge part of the subtext of the story". She chose a laugh for Lacie, her character, that she meant to connote artificiality, anxiety, and dejection. Both Howard and the episode received critical praise; The Guardian lauded her portrayal as "brilliantly played" and The Atlantic wrote "Howard's performance is terrific–she conveys Lacie's inner frustration while grinning cheerfully through it". Howard received a Screen Actors Guild Award nomination for her performance.

Howard made her feature-film-directing debut with the documentary Dads, which premiered at the 2019 Toronto International Film Festival, where it was named second runner-up for the People's Choice Award for Documentaries. Dads received critical acclaim; Variety wrote; "Howard favors observation over lecture, anecdotes over numbers, showing instead of telling what equally split primary-caregiving looks like in contemporary households" and The Guardian said the film "mixes the platitudinous with the genuinely moving". She directed two episodes of the Disney+ series The Mandalorian, which premiered in 2019 and 2020. Howard referred to the larger Star Wars universe as an asset to storytelling, and sought to maintain character depth and appeal to viewers. Howard's direction received positive responses; DiscussingFilm stated she "crafts [the episode] to be admirably quaint" and praised her "ecstatic framing" that made for "wholesome visuals" while Den of Geek said she "[made] the episode pop" and "knows what makes Star Wars tick".

In 2019, Howard voiced the character Bella in A Dog's Way Home, which opened to critical and commercial success. Howard appeared as Elton John's mother Sheila Dwight in the musical biopic Rocketman (2019), which was directed by Dexter Fletcher. Howard described her character as humorous and sharp-witted, and a s someone who struggled with her mental health. Howard worked extensively with make-up artists to design the character's look as she aged, and used Elizabeth Taylor as inspiration for her portrayal. Rocketman was a box-office hit, garnered critical acclaim, and received a nomination for the Golden Globe Award for Best Motion Picture – Musical or Comedy. The Chicago Sun-Times praised Howard for her "finely nuanced work" and CinemaBlend called her performance a "wicked portrayal ... that really ties a film together".

Howard directed an episode of The Book of Boba Fett, which premiered on Disney+ on January 26, 2022. Following the episode's premiere, Star Wars fans took to Twitter and called for Howard to direct a trilogy of Star Wars films. She reprised her role as Claire in Jurassic World Dominion (2022). In July 2021, Howard was cast in the action film Argylle, which is based on Ellie Conway's spy novel of the same name. The same year, Variety reported Howard will direct and produce a remake of family science-fiction adventure Flight of the Navigator (1986), which was rewritten with a female lead.