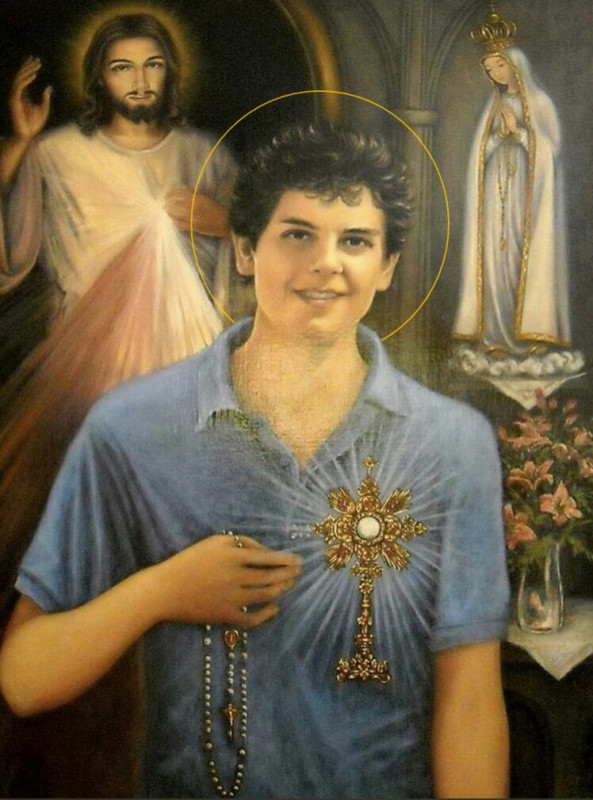 Carlo Acutis (3 May 1991 – 12 October 2006) was an English-born Italian Catholic youth and amateur computer programmer, who is best known for documenting Eucharistic miracles around the world and cataloguing them onto a website that he created before his death from leukemia. He was noted for his cheerfulness, computer skills, and deep devotion to the Eucharist, which becomes a core theme of his life. He was beatified on 10 October 2020.

Carlo Acutis was born in London on 3 May 1991 to a wealthy Italian family with Irish and Polish roots. His baptism took place on 18 May 1991 in the church of Our Lady of Dolours, Chelsea. His parents, Andrea Acutis and Antonia Salzano, who were not especially religious, had worked in London and Germany, but finally settled in Milan in September 1991, not long after their first son's birth. In 1995 when Acutis was four years old, his maternal grandfather died and was said to have appeared to him in a dream asking to be prayed for. When the child evinced a precocious interest in religious practice, his questions were answered by the family's Polish baby-sitter. Three years later he requested to receive his First Communion at the unusually early age of seven. After consulting a prelate and providing instruction, the family arranged this at the convent of Sant'Ambrogio ad Nemus. Thereafter he made the effort, either before or after Mass, to reflect before the tabernacle. Acutis became a frequent communicant and would make a weekly confession. He is said to have had several models as guides for his life, especially Francis of Assisi, as well as Francisco and Jacinta Marto, Dominic Savio, Tarcisius, and Bernadette Soubirous.

Those around him considered him a "computer geek" on account of his passion and skill with computers and the internet. Acutis applied himself to creating a website dedicated to cataloguing each reported Eucharistic miracle in the world. He completed this in 2005, having started compiling the catalogue at the age of eleven. He admired Giacomo Alberione's initiatives to use the media to evangelize and proclaim the Gospel and aimed to do likewise with the website he had created. It was on the website that he said: "the more Eucharist we receive, the more we will become like Jesus, so that on this earth we will have a foretaste of heaven".

When he developed leukemia, he offered his suffering both for Pope Benedict XVI and for the Catholic Church, saying; "I offer all the suffering I will have to undergo for the Lord, for the Pope, and the Church". He had asked his parents to take him on pilgrimages to the sites of all the known Eucharistic miracles in the world, but his declining health prevented this from happening. The doctors treating his final illness had asked him if he was in great pain to which he responded that "there are people who suffer much more than me". He died on 12 October 2006 at 6:45 AM from M3 fulminant leukemia. He was buried in Assisi in accordance with his wishes.

The call for him to be beatified began not long after Acutis' death. The campaign gained momentum in 2013 after he was named a Servant of God, the first stage on the path towards sainthood. The Lombardy Episcopal Conference approved the petition for the official canonization cause to proceed at a meeting in 2013. The opening of the diocesan investigation was held on 15 February 2013, with Cardinal Angelo Scola inaugurating the process, and concluding it on 24 November 2016. The formal introduction to the cause took place on 13 May 2013, and Acutis became titled a "Servant of God". Pope Francis next confirmed his life as one of heroic virtue on 5 July 2018, and declared him Venerable.

On 14 November 2019, the Vatican's Medical Council of the Congregation for the Causes of Saints expressed a positive opinion about a miracle in Brazil attributed to Acutis' intercession. Luciana Vianna had taken her son, Mattheus, who was born with a pancreatic defect which made eating difficult, to a prayer service. Beforehand, Vianna had already prayed a novena asking for the teenager Acutis' intercession. During the service her son had simply asked that he should not "throw up as much". Immediately following the service, Mattheus told his mother he felt healed and asked for solid food when he came home. Until then he had been on an all-liquid diet. After a detailed investigation, Pope Francis confirmed the miracle's authenticity in a decree on 21 February 2020, leading to Acutis' beatification.

Acutis's mother, Antonia, is said to attribute to his intercession the fact that, at the age of 44, she gave birth to twins, born exactly four years to the day after his death. Following the Catholic Church's recognition of a miracle in 2020, attributed to Acutis, Antonia told the press that her son had appeared to her in dreams saying that he will not only be beatified but also canonised a saint in the future.

Since the beatification ceremony on 10 October 2020, silent crowds have been filing past the exposed relics of the blessed youth in the one time cathedral of Assisi, the church of Santa Maria Maggiore.

Within a month of the decree, the beatification ceremony was postponed due to the COVID-19 pandemic in Italy, during which the country was placed on lockdown. It was rescheduled for 10 October 2020 and was held in the Upper Church of the Basilica of Saint Francis of Assisi in Assisi, Italy, with Cardinal Agostino Vallini presiding on the pope's behalf. As of 2019 , the postulator for Acutis' cause is Nicola Gori.