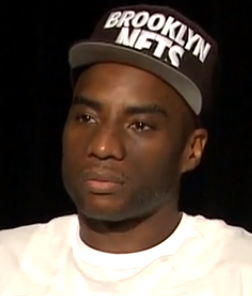 Lenard Larry McKelvey (born June 29, 1978), known professionally as Charlamagne tha God, is an American radio presenter, television personality, and author. He is a co-host of the nationally syndicated radio show The Breakfast Club with DJ Envy and Angela Yee, and stars in Guy Code, Guy Court and Girl Code. He was also a VJ for The Week in Jams with DJ Envy and Sofi Green. In 2015, Charlamagne began hosting the MTV2 show Uncommon Sense. He was previously on The Wendy Williams Experience with Wendy Williams on VH1. In the shock-jock tradition, one of Charlamagne's personal mantras is "bite my tongue for no one."

McKelvey was born to Larry Thomas McKelvey, a Jehovah's Witness-turned-Muslim and his wife Julie Ford McKelvey, an English teacher and Jehovah's Witness, on June 29, 1978, and grew up in Moncks Corner, South Carolina. As a teenager, McKelvey began selling drugs, and was arrested twice for possession of marijuana and cocaine with intent to distribute. After witnessing a shooting from the back seat of a car, McKelvey was arrested for a third time. His father refused to pay his bail money, and McKelvey remained in jail for 41 days. Eventually, he called his mother, who paid for his bail and McKelvey was released.

After being released from the county jail, McKelvey began attending night school and eventually got a job as a radio intern. He went on to become second mic to radio host Wendy Williams. He developed the stage name of Charlamagne, taken from his pseudonym as a drug dealer, "Charles," and created a new persona based on King Charlemagne, who ruled much of Western Europe as part of the Carolingian Empire in the late 700s and early 800s, whom he read about at night school. He added "Tha God" because it "sounded cool." At this point, his unorthodox and upfront questioning of hip-hop/R&B artists on radio raised his public profile but also caused rifts between himself and the guests of the show. He was laid off from the program in 2008. Relations between Charlamagne and Williams deteriorated, though Charlamagne has stated numerous times on his show The Breakfast Club that he views Williams as a mentor and bears no ill feeling toward her.

In 2010, Charlamagne began hosting The Breakfast Club, alongside DJ Envy and Angela Yee on WWPR-FM in Manhattan, along with its national television simulcast on Revolt. Once part of the show, Charlamagne gave himself the title "Prime Minister of Pissing People Off, the Architect of Aggravation, and the Ruler of Rubbing People the Wrong Way." In 2014, Rolling Stone nicknamed him "hip-hop's Howard Stern."

Beginning on November 15, 2011, Charlamagne served as a cast member of Guy Code, a comedy television show on MTV2 that talks about a special code of conduct just for men. The show ended in March 2015. He formerly starred on the MTV2 show Charlamagne & Friends At the end of 2013 and 2014, he co-hosted MTV New Year's live from Times Square and in 2015 he was a correspondent for the 2015 MTV Video Music Awards pre-show. He currently stars and hosts MTV2 show Uncommon Sense with Charlamagne tha God. He currently narrates the BET Show, Inside the Label.

She returned to The Breakfast Club for a less tense interview on January 12, 2016.

Rapper Birdman walked out of his interview with The Breakfast Club on April 22, 2016, after just over two minutes, claiming the hosts, specifically Charlamagne, were not "putting respect on his name". Birdman was angry at the hosts allowing artists such as Trick Daddy and Rick Ross to appear on the show and make disparaging remarks about him. Charlamagne questioned why Birdman was angry at him and not the artists themselves, and Birdman left the interview after just over two minutes. The interview went viral and resulted in numerous memes based on the incident. It is the shortest interview in Breakfast Club history.

On October 11, 2016, rapper Beanie Sigel appeared on The Breakfast Club to conduct an interview. Sigel grew annoyed with Charlamagne's perceived attempts at escalating the feud between himself and Meek Mill, complaining that Charlamagne was "harping on the issue". Charlamagne branded Sigel a hypocrite, who responded by saying he felt Charlamagne was a "sucker" for letting Fredro Starr disrespect him live on air, and criticised him for making rapper Lil Mama cry, calling him a coward. Siegel threatened to walk out numerous times before eventually finishing the interview. The subsequent video went viral.

In 2017, his book Black Privilege: Opportunity Comes to Those Who Create It, which he called "a self-help guide for the hood," was published by the Simon & Schuster imprint Touchstone. Steven Kurutz of The New York Times gave the book a mostly positive review, describing Black Privilege as "a street-smart self-help guide" with typically blunt advice offered in eight different principles. The book was ranked sixth in the May 7, 2017, New York Times list of best-selling hardback non-fiction. McKelvey's second book, Shook One: Anxiety Playing Tricks on Me was released on October 23, 2018.

In July 2017, comedian Lil Duval joked on The Breakfast Club show about killing a sex partner if she turned out to be a transgender woman. Charlamagne tha God, while noting that killing a trans person was a hate crime, stated that women not disclosing their trans status were "taking away a person's power of choice" and "should go to jail or something". In response, trans activists, including Raquel Willis and Elle Hearns, called for the show to be boycotted or cancelled.

In June 2019, Charlamagne interviewed Democratic Presidential candidate Elizabeth Warren, whereupon he confronted her about her claims of Native American ancestry. In the interview he compared her to Rachel Dolezal.

In the May 11, 2020 airing of The Breakfast Club, Charlamagne revealed that he had been working as a producer for a BET special on American record executive, record producer, songwriter and rapper Andre Harrell.

On May 22, 2020, Charlamagne interviewed presumptive Democratic Party nominee for President of the United States Joe Biden. Towards the end of the sometimes tense interview, Charlamagne asked Biden to come to do another interview in their New York City studio in the future, saying "we've got more questions for you." Mr. Biden responded "You've got more questions? Well, I tell you what, if you have a problem figuring out whether you're for me or Trump, then you ain't Black." Charlamagne said that "It don't have nothing to do with Trump. It has to do with the fact that I want something for my community." African-American Republican senator Tim Scott said that Biden's comment "is the most arrogant, condescending comment I've heard in a very long time." After criticism, Biden apologized for the comments later that same day on a phone call with the U.S. National Black Chamber of Commerce, stating that it was wrong for him to be such a "wise guy" and "cavalier" when referencing his Black supporters. According to Charlamagne, his goal was to get Biden to discuss what he's done for the black community recently. He's known for having tough interviews with political candidates.