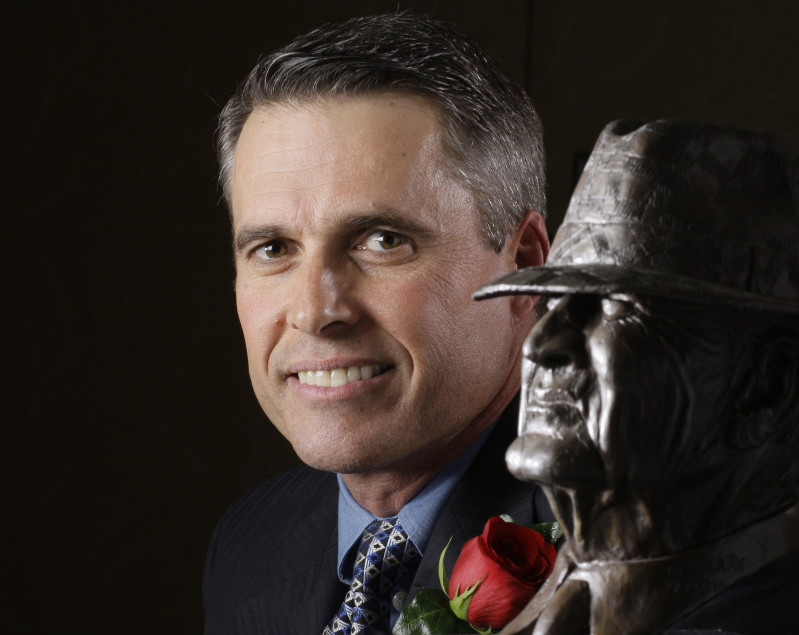 Christopher Scott Petersen (born October 13, 1964) is an American football coach who was most recently the head coach at the University of Washington. Previously the head coach for eight seasons at Boise State University, Petersen guided the Broncos to two BCS bowl wins: the (2006 Season) 2007 and (2009 Season) 2010 Fiesta Bowls. He is the first two-time winner of the Paul "Bear" Bryant Award, which he won in 2006 and 2009. Petersen also won the Bobby Dodd Coach of the Year Award in 2010. At Washington, Petersen led the Huskies to the College Football Playoff in 2016, but fell to Alabama in the Peach Bowl. Petersen announced his resignation on December 2, 2019, to be effective after the team's bowl game.

Born and raised in Yuba City, California, Petersen played safety and quarterback for the Honkers at Yuba City High School. After graduation in 1983, he played quarterback for the Sacramento City College Panthers for two seasons, then transferred to non-scholarship UC Davis, then in Division II. He earned a bachelor's degree in psychology in 1988 and a master's degree in education from UC Davis.

Petersen began his coaching career in 1987 as the head freshman coach at UC Davis under Hall of Fame coach Jim Sochor. In 1989, he became the receivers coach for the varsity, departing in 1992 to become the quarterbacks coach at Pittsburgh. While at Pittsburgh, he coached QB Alex Van Pelt to a season where he threw for over 3,100 yards with twenty touchdowns.

He moved back west in 1993 to coach the quarterbacks at Portland State under Tim Walsh; the Vikings advanced to the Division II playoffs in both 1993 and 1994. Petersen moved over to Oregon in 1995 as the receivers coach, and spent six years as an assistant for the Ducks under head coach Mike Bellotti. In 1996, WR Cristin McLeMore topped 1,000 yards receiving. In 1997, WR Pat Johnson topped 1,000 yards. In 1998, WRs Damon Griffin and Tony Hartley both topped 1,000 yards on the year.

The Broncos defeated Big 12 champion Oklahoma in the Fiesta Bowl as only the second BCS non-AQ conference school to play in a BCS bowl, after Utah in 2004. In the 43–42 overtime win, Petersen drew particular attention for his bold play calling at the end of the game: A 50-yard hook-and-lateral play on 4th-and-18 described as "stunning" for a tying touchdown with just 7 seconds left in regulation, an option pass (off a direct snap to a wide receiver) on 4th-and-2 in overtime, and a "Statue of Liberty" misdirection play for the two-point conversion to win the game in overtime. Petersen stated, "We were trying to get to it earlier, to tell you the truth. We needed a play like that to get it over with."

In his first year as head coach, Petersen led the Broncos to an undefeated regular season in 2006 and the program's first ever BCS bowl game berth. He became the fourth rookie head coach to lead a team to a BCS bowl game; Boise State was the only undefeated team in Division I FBS for the 2006 season.

After the undefeated season of 2006, the Idaho State Board of Education approved a new contract for Petersen on February 22, 2007, paying him $4.25 million for five years, or $850,000 per year. His salary was paid mostly by revenue from the Football Coaches Club, the Bronco Athletic Association booster club, and media and public appearances; state-appropriated funds covered $150,000 per year.

After leading Boise State to another undefeated regular season in 2009, Petersen was rewarded with a new five-year contract extension on January 1, 2010. The state board of education approved the new contract on April 22, which paid $8 million over five years, or $1.6 million per year. The contract also included automatic one-year extensions to the contract each time Petersen won at least eight regular season games.

On December 6, 2013, Petersen agreed to a five-year, $18 million contract to become the new head coach at Washington. He replaced Steve Sarkisian, who announced that he was leaving Washington to take the same position at USC three days after the 2013 Apple Cup.

In Petersen's first season in 2014, Washington went 8–6 and lost in the Cactus Bowl to Oklahoma State. During the season, Petersen became the quickest active FBS coach to reach 100 wins, achieving the mark in just 117 games as a head coach.

In 2015, a young Huskies team finished 7–6, including an upset at USC against Sarkisian. Washington defeated Southern Miss in the Heart of Dallas Bowl. Petersen signed a two-year contract extension near the end of the 2015 season.

The 2016 Huskies had one of the best seasons in Washington history, winning the Pac-12 championship and earning a berth to the program's first-ever College Football Playoff. In the Pac-12 Championship, No. 4 Washington defeated No. 9 Colorado 41–10 at Levi's Stadium. On December 31, 2016, Alabama beat Washington 24–7 in the Peach Bowl, ending the Huskies' season. After the season, Petersen's contract was extended through 2023 with an average salary of $4.875 million per year. This new contract made Petersen the highest paid coach in the Pac-12 at the time.

Washington posted back-to-back 10-win seasons for the first time since 1990–91 after going 10–3 in 2017. The Huskies played in a New Year's Six bowl, losing to Penn State in the Fiesta Bowl.

Petersen led the Huskies to another Pac-12 title in 2018. UW defeated Utah 10–3 in the title game to clinch a berth in the Rose Bowl against Ohio State. During the season, Washington beat No. 7 Washington State in the Apple Cup, marking the Huskies' sixth straight rivalry win over the Cougars under Petersen.

After losing numerous key starters to the NFL Draft, the 2019 Huskies regressed from previous seasons, finishing the regular season 7–5. Petersen and the Huskies did win their seventh straight Apple Cup in 2019, beating Washington State, 31–13. On December 2, Petersen announced he would step down as Washington's head coach at the end of the season due to stress and assume a leadership advisory role with the athletics program. In his final game as coach, Washington beat his former team, Boise State, in the Las Vegas Bowl, 38–7.