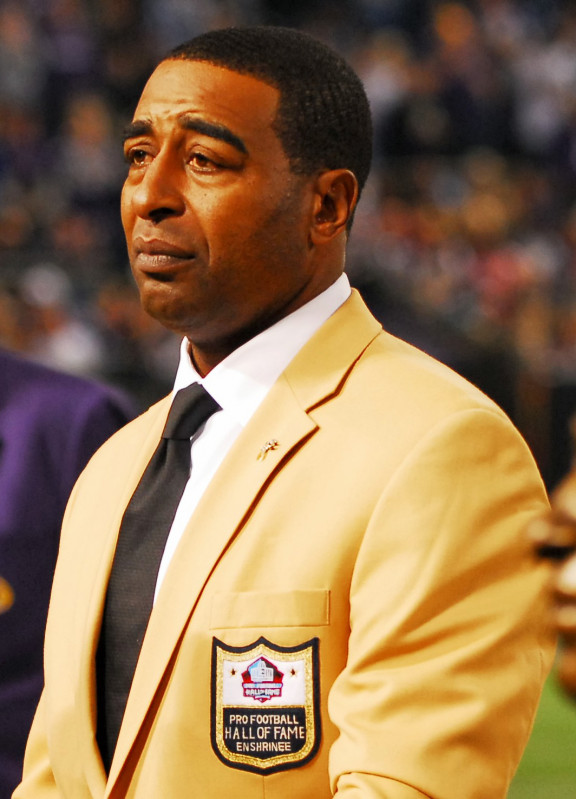 Cris Darin Carter (born November 25, 1965) is a former American football player in the National Football League. He was a wide receiver for the Philadelphia Eagles (1987–89), the Minnesota Vikings (1990–2001) and the Miami Dolphins (2002). After starting for the Ohio State University Buckeyes, Carter was drafted by the Eagles in the fourth round of the 1987 NFL supplemental draft. While in Philadelphia, head coach Buddy Ryan helped to coin one of ESPN's Chris Berman's famous quotes about Carter: "All he does is catch touchdowns." He was let go by Ryan in 1989, however, due to off-the-field issues. Carter was signed by the Vikings and turned his life and career around, becoming a two-time first-team and one-time second-team All-Pro and playing in eight consecutive Pro Bowls. When he left the Vikings after 2001, he held most of the team career receiving records. He briefly played for the Dolphins in 2002 before retiring.

Carter got more involved in the Eagles offense in 1988 catching 39 passes for 761 yards and tying for the team lead with 6 scoring receptions. In 1989, he became the teams' primary red zone receiver, leading the Eagles with 11 touchdown catches (3rd in the NFC) while hauling in 45 passes for 605 yards.

The Minnesota Vikings claimed the troubled wide receiver off waivers on September 4, 1990. Stuck behind Hassan Jones and resident star receiver, Anthony Carter (no relation), Carter didn't see very many passes come his way during his first season in Minnesota. He did gain a measure of revenge against his former team, however, catching six passes for 151 yards, including a 78-yard touchdown, in a Monday Night contest at Philadelphia on October 15. Carter finished the 1990 campaign with 27 receptions for 413 yards and 3 touchdowns.

In 1991, Carter stepped forward as Minnesota's top pass catcher. He led the team with 72 receptions, 962 yards, and 5 touchdown catches. The winds of change were blowing in Minnesota; after a second straight disappointing season head coach Jerry Burns retired. Stanford head coach Dennis Green was named as his replacement on January 10, 1992 and began a house cleaning process. "The New Sheriff in Town" released stalwarts like RB Herschel Walker and QB Wade Wilson and traded DT Keith Millard to the Seattle Seahawks.

The Vikings returned to NFL prominence in 1992, posting an 11–5 record and capturing their first NFC Central Division title since 1989. With Rich Gannon and Sean Salisbury playing musical chairs at QB, Carter remained the team's primary aerial weapon—leading the team with 53 receptions, 681 yards, and 6 touchdowns despite missing the final four games of the season with a broken collar bone. The Vikings season ended in disappointment, however, as the defending Super Bowl champions Washington Redskins upended them 24–7 in the Wild Card round.

In 1993, veteran QB Jim McMahon acted as the team's primary signal caller and Carter had a breakout season. He posted career highs in receptions, 86, and yards, 1,071, while catching 9 touchdowns — all team highs, and appeared in his first Pro Bowl. The Vikings finished the season 9–7, good enough for a playoff berth, but fell 17–10 to the New York Giants in the Wild Card round.

Carter teamed up with Moon in 1995 to post his finest statistical season. He caught 122 passes for a career high 1,371 yards and led the NFL with 17 touchdown receptions. Carter received Second-team All Pro honors for his efforts. The Vikings, however, finished 8–8 and missed the playoffs for the first time under Green.

Veteran quarterback Warren Moon was acquired before the 1994 season and immediately developed a rapport with Carter. The veteran helped Carter set the NFL single season record for receptions with 122 (the record was broken in 1995 by Detroit's Herman Moore and then topped by the Colts' Marvin Harrison in 2002). Carter also led the team with 1256 yards and 7 receiving touchdowns, which earned him First-team All Pro honors. Moon and Carter carried the team to a 10–6 record and the NFC Central title, but couldn't stop the Vikings from a third straight first round playoff exit — a 35–18 home loss to the Chicago Bears.

Carter continued to be the focal point of the Vikings' offense in 1997. He was named to his fifth consecutive Pro Bowl, leading the NFL with 13 touchdown receptions while pacing the team with 89 catches and 1069 yards. Even though he had more impressive seasons statistically, 1997 may have been Carter's finest hour, as week after week he dazzled with one spectacular catch after another. With Randall Cunningham at QB (he replaced the injured Johnson late in the season) the Vikings finally broke through in the playoffs, defeating the Giants 23–22 in a last-minute miracle comeback. The playoff success was fleeting, however, as the team fell to the San Francisco 49ers 38–22 the following week.

In 1998 the Vikings drafted Marshall wide receiver Randy Moss with 21st pick in the first round. Suddenly, the Vikings possessed the NFL's most dangerous weapon. They cruised through the regular season, posting a 15–1 record while scoring a then-league record 556 points. Carter, who made the Pro Bowl for the fifth time, caught 78 passes for 1,011 yards and 12 touchdowns. Led by Moss, Carter, and Miller Lite Player of the Year Randall Cunningham, the Vikings entered the playoffs as heavy favorites to reach the Super Bowl. They easily defeated the Arizona Cardinals 41–21 in the Divisional Round, advancing to the NFC Championship Game for the first time since 1987. The Vikings entered that game as 13 and a half point favorites over the Atlanta Falcons, but lost in overtime 30–27 to become the biggest favorite to ever lose a home playoff game. Carter later said losing that game was the lone regret of his time in Minnesota, and that he didn't even know if he wanted to play anymore afterwards.

Despite losing his senior year, Carter left Ohio State holding the school record for receptions (168). In 2000, he was selected as a member of the Ohio State Football All-Century Team. In 2003, he was inducted into the Ohio State Varsity O Hall of Fame.

In 2000, led by Daunte Culpepper, the Vikings won the NFC Central division, and Carter finished the season with 96 receptions, 1274 yards, 9 touchdowns, and an eighth Pro Bowl. On November 30, Carter became only the second player in NFL history to reach the 1,000 reception plateau when he caught a 4-yard touchdown pass against Detroit.

In 2001, the Vikings floundered with a record of 5–11, their first losing season since 1990. Carter's production dipped to its lowest point since 1992 (mostly because of QB Spergon Wynn's ineffectiveness in the last three games) — 73 catches, 871 yards, 6 touchdowns — and his streak of eight straight Pro Bowls came to an end. Following the season, the longest-tenured Viking exercised an out clause in his contract that ended his career in Minnesota.

Carter was one of the hosts of HBO's Inside the NFL and also was an NFL Analyst for Yahoo Sports and ESPN. He is also a faculty member and assistant coach at St. Thomas Aquinas High School, where his son played wide receiver in 2008. He is the owner of Cris Carter's FAST Program, a sports training center in South Florida and is an ordained minister. He also appeared in the 2005 sports video game NFL Street 2 as a wide receiver for the NFL Gridiron Legends team along with former teammate, safety Joey Browner, and a few other historical NFL legends.

At the time of his retirement, Carter's 1,101 career receptions and 130 touchdowns as a receiver placed him second in NFL history behind Jerry Rice, although his totals have since been surpassed by Marvin Harrison (receptions) and by Randy Moss and Terrell Owens (touchdown receptions). He is one of 14 players in NFL history with 1,000 or more receptions. He was named to the NFL 1990s All-Decade Team. Carter was one of fifteen finalists for the Pro Football Hall of Fame class of 2008, but was not elected in a surprise to some commentators. Carter was once again excluded in 2009 and again in 2010 as receivers Jerry Rice and Tim Brown became eligible for the first time, though Brown did not make it. Additionally, Andre Reed was another possible candidate that diminished Carter's chance for enshrinement in 2010. In 2011, he also did not make it despite not having a single wide receiver in the class.

Carter has two children. His daughter, Monterae works in philanthropy. His son, Duron Carter, played wide receiver at Ohio State in 2009 and Coffeyville Community College in 2010. Professionally, he played for the Montreal Alouettes, a Canadian Football League (CFL) team, in 2013-2014 and 2016, spending 2015 on the practice squad of the Indianapolis Colts of the NFL. In Montreal, Duron was described as being a terrible teammate among the players on the Alouettes team. In 2017, he signed on with the Saskatchewan Roughriders, also in the CFL, where he served primarily as a receiver and occasionally played cornerback. Duron was released by the Roughriders in August 2018, in the midst of the 2018 CFL season. He subsequently signed on with the Toronto Argonauts a few weeks later, and now currently plays for the B.C Lions. Cris is the younger brother of ex-NBA player and coach Butch Carter.

After six years, and five finalist selections, Carter was voted to the Pro Football Hall of Fame on February 2, 2013.

On February 2, 2013, Carter was announced as an inductee into the Hall of Fame Class of 2013 along with Bill Parcells, Larry Allen, Jonathan Ogden, Warren Sapp, Curley Culp, and Dave Robinson.

Named after his grandfather, Graduel, Carter dropped his birth name and unofficially changed his name to Cris after wide receiver Cris Collinsworth, stating that he would never be famous with the name Graduel. According to Carter on ESPN Radio's "Mike & Mike" (on September 15, 2014), he dropped the name during 7th grade, and his name is still listed as Christopher on official documents, including his driver's license.

Carter was a speaker at the 2008 NFL rookie symposium and again at the 2009 NFL Rookie Symposium. He also spoke at the 2014 NFL rookie symposium, where he encouraged players to get a fall guy they can trust to take the blame if they get in trouble. The comments were revealed in 2015 in an ESPN The Magazine story about Chris Borland. The NFL took the video of the speech down from its website and released a statement saying in part: "The comment was not representative of the message of the symposium or any other league program...The comment was not repeated in the 2014 AFC session or this year's symposium." Carter apologized on Twitter, saying he realized it was bad advice, and everyone should take responsibility for their own actions. ESPN also released a statement saying Carter's comments do not reflect the company's views.

In December 2016, Carter was hired by Fox Sports as a football analyst. In May 2017, his role was expanded as it was announced that Carter would co-host a morning show, First Things First, on Fox Sports 1 with radio personality Nick Wright and moderator Jenna Wolfe. The show premiered on September 5, 2017. His tenure ended in November 2019 following a suspension.

Since retiring from the NFL, Carter has worked on HBO's Inside the NFL, ESPN's Sunday NFL Countdown and Monday Night Countdown, and online at Yahoo Sports. He also works as an assistant coach at St. Thomas Aquinas High School, where his son played wide receiver. In 2017, Carter began co-hosting First Things First with Nick Wright on FS1. He was terminated from the show following a suspension and investigation in 2019. Carter resides in Boca Raton, Florida. He is the brother of former NBA player and coach Butch Carter.