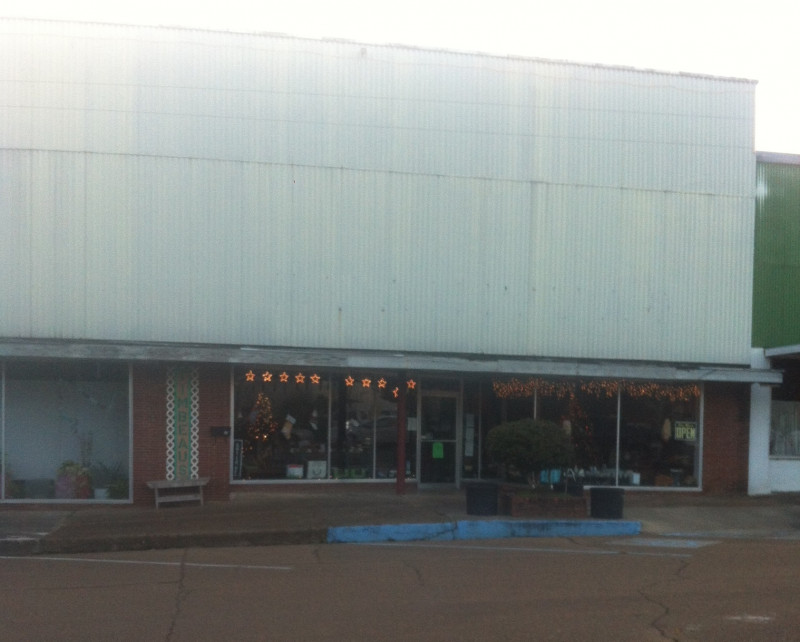 Curtis Giovanni Flowers (born May 29, 1970) is an American man who was tried for murder six times in the U.S. state of Mississippi. Four of the trials resulted in convictions, all of which were overturned on appeal. Flowers was alleged to have committed the July 16, 1996, shooting deaths of four people inside Tardy Furniture store in Winona, seat of Montgomery County. Flowers was first convicted in 1997; in five of the six trials, the prosecutor, Montgomery County District Attorney Doug Evans sought the death penalty against Flowers. As a result, Flowers was held on death row at the Parchman division of Mississippi State Penitentiary for over 20 years.

On the morning of July 16, 1996, a retired employee of Tardy Furniture entered the store and found four bodies: owner Bertha Tardy, and three employees, Robert Golden, Carmen Rigby, and Derrick Stewart, who was 16 at the time of his murder. All had been fatally shot. Curtis Flowers was suspected after police learned that he had been fired from the store 13 days prior to the murders. He also owed Bertha Tardy $30 for a cash advance on his paycheck.

Flowers maintained that he was innocent of the murders and said that he never admitted any crimes to his cellmates. He claimed to simply have stopped going to the job and did not know he had been fired. He said he was wearing Nike shoes that day, the clothes he was wearing did not match the description given by eyewitnesses, and the particulate matter on his hands was due to his having handled fireworks the day before the murders. In 1997 he was convicted of the murder of the store owner by an all-white jury and sentenced to death.

Flowers was first tried in 1997, before Judge Clarence E. Morgan III. The prosecutor decided to try Flowers for the death of the store owner, Bertha Tardy, as occurring in the course of a robbery. This would increase the penalty for conviction, making the defendant eligible for the death penalty. The prosecution said that bloody footprints found at the crime scene were a size 10½, the same as that worn by Flowers. They were identified as Fila's Grant Hill style, which witnesses said Flowers had been wearing that morning.

While the first case was still under appeal, prosecutors initiated a second trial for the murder of employee Derrick Stewart at the Tardy store. Morgan was the judge again; one black person was on the jury. Scheduled for September 1998, the court granted the defense a change of venue, moving the trial to Harrison County due to the difficulties in getting a fair and impartial jury in Montgomery County, and the trial started in on March 22, 1999. Flowers was convicted on March 30 and sentenced to death. This verdict was also overturned (in 2003) on appeal by the Mississippi Supreme Court, which held that Evans' prosecution "employed many of the same tactics during the second trial" as it did in the first, the court had improperly allowed evidence regarding the other murders to be admitted, and that other prosecutorial errors were made.

The conviction verdict in the first trial was overturned in 2000 by the Mississippi Supreme Court after Flowers appealed. The court held that evidence presented by Evans on behalf of the state was prejudicial because, in presenting evidence for all four murders, it went beyond that necessary to prove the murder of Tardy alone. In addition, the prosecutor was held to have asked questions "not in good faith" and "without basis in fact." The court remanded the case for a re-trial.

A third trial on charges of four counts of murder was concluded on February 12, 2004, and Flowers was convicted of each murder. The jury sentenced him to death. Morgan was again the judge. The verdict was overturned in 2007 by the Mississippi Supreme Court as it held that Evans' peremptory challenges in jury selection were racially motivated and thus unconstitutional. During the selection process, Evans challenged African-American jurors with its first seven strikes, which resulted in a Batson challenge by the defense (Batson v. Kentucky (1986) established that peremptory challenge cannot be used to discriminate against jurors based on race, ethnicity, or sex ). Following its submission of non-racial grounds for its challenges, Evans used all of the state's five remaining challenges to strike African-American jurors. This left the jury with only two African-American jurors, one of which was subsequently excused after informing the judge that he could not be impartial. Evans then used the state's three alternate juror strikes to exclude African-Americans. The final jury consisted of one African-American and 11 whites. (The county population is 45% African American. )

At the fourth trial, before Morgan in 2007 on four counts of murder, the prosecution did not seek the death penalty on the request of family of the victims who, aware that the defense would have the harder task of appealing a higher court if the sentence was life in prison, wanted the trial concluded so they could 'move on'. Evans exhausted the state's peremptory challenges in jury selection striking off black candidates; the resulting jury, however, had five African Americans on it. The fourth trial ended in a mistrial, as the jury was split 7–5 in favor of conviction; votes could be classified by race, among other factors, with African Americans voting to acquit.

The prosecution sought the death penalty for Flowers for the four murders in his fifth trial, which took place in 2008. This time Joseph Loper sat as judge. On the first day of testimony, an alternate juror, the only black woman on the jury, was arrested for perjury for lying during jury selection when she said she did not know Flowers. The trial, with a jury of nine white and three black jurors, concluded in 2008 in a mistrial due to a hung jury. James Bibbs, an African American, was the sole juror opposed to conviction. Immediately after the trial the judge, Joseph Loper, accused Bibbs of perjury for having lied during jury selection. Loper recommended Bibbs be prosecuted by Doug Evans, who, after eight months, recused himself and the new prosecution dropped the charges against Bibbs as there was no evidence. Loper was also recused as judge in Bibbs' trial.

A jury for a sixth capital murder trial was convened in Winona, Mississippi on June 10, 2010; it was composed of eleven white jurors and one black juror, and presided over by Judge Loper. Following 30 minutes of deliberation, the jury found Flowers guilty of four counts of capital murder. After deliberating for approximately 90 minutes during the penalty phase, the jury returned a death sentence. An appeal by Flowers failed, the Mississippi Supreme Court ruling in 2014 that the conviction was to be upheld.

In his first trial, Flowers was convicted of the aggravated murder and robbery of the store owner. This verdict and a conviction in a second trial for the murder of one of the store employees were both overturned by the Mississippi Supreme Court due to prosecutorial misconduct. A subsequent trial for all four murders resulted in conviction, but this was overturned by the Mississippi Supreme Court for racial bias by the prosecutor in jury selection: Flowers is black and the prosecution excluded a disproportionate number of black jurors. Flowers' fourth and fifth trials ended as mistrials. On June 18, 2010, a majority-white jury in Flowers' sixth trial convicted him of the 1996 murders and voted to impose a death sentence.

In 2016 the U.S. Supreme Court referred the sixth trial back to the Mississippi Supreme Court for review of racial discrimination in jury selection. The following year the state court confirmed the original decision. The U.S. Supreme Court overturned Flowers' conviction in 2019 because of Evans' efforts to keep black people off the jury. Flowers was released on bail to await the state's next decision. Evans recused himself from the case and handed the case to the State Attorney General. In 2020, it was announced that charges would be dropped against Flowers.

Flowers' case was one of three that the U.S. Supreme Court ruled in June 2016 were to be remanded to lower courts to be reviewed for evidence of racial bias in jury selection. After the Mississippi Supreme Court reaffirmed the conviction, the U.S. Supreme Court again reviewed Flowers' case. It overturned, on a 7–2 vote, the murder convictions in June 2019 in the decision Flowers v. Mississippi, with Justice Brett Kavanaugh writing for the majority. In December 2019, Flowers was released from prison for the first time since his original arrest, on $250,000 bond, pending a state decision on whether it would attempt another prosecution. On September 4, 2020, Mississippi Attorney General Lynn Fitch, a Republican who had taken over the case from District Attorney Evans, announced she would not seek a seventh trial and had dropped the charges against Flowers.

In June 2016, the U.S. Supreme Court included Flowers' case among three capital cases it remanded to lower courts to review for racial bias by the prosecution in jury selection. In November 2017, the Mississippi Supreme Court renewed its prior determination, and affirmed Flowers' conviction and death sentence from the sixth trial.

In 2018, the second season of the American Public Media podcast In the Dark was based on reporting about the Flowers case, hosted and reported by journalist Madeleine Baran. Through in-depth investigative reporting, serious doubt was cast on the legitimacy of the case against Flowers, including claims by numerous witnesses that they had perjured themselves, potential misconduct by the prosecutor, and the disappearance of a gun, potentially the murder weapon, after it was turned over to police.

New evidence uncovered during the In the Dark investigation was used by Flowers' lawyers to attempt to get his conviction overturned by the U.S. Supreme Court. A petition for a writ of certiorari was filed, seeking review of the Mississippi Supreme Court's application of Batson v. Kentucky. The U.S. Supreme Court granted the writ on November 2, 2018.

The court heard oral argument on March 20, 2019. Amicus briefs on behalf of Flowers were filed by the Magnolia Bar Association, the Mississippi Center for Justice, and Innocence Project New Orleans. On June 21, 2019, the U.S. Supreme Court overturned Flowers' sixth conviction with a vote of 7–2 in Flowers v. Mississippi. The Supreme Court's decision was made based on the argument that the prosecutor, Doug Evans, had committed a Batson violation by striking all but one prospective black juror in Flowers' sixth trial. Justice Brett Kavanaugh wrote the majority decision:

On December 16, 2019, Judge Loper granted Flowers bail in the amount of $250,000, of which he was required to deposit 10 percent. Flowers was restricted to his residence, and required to wear an ankle monitor. Judge Loper noted in his decision that several of the prosecution's key witnesses had recanted. In addition, the documentary In the Dark reported that potentially exculpatory evidence had been uncovered, as well as alternative suspects, seemingly leaving the prosecution with a weaker case than in the previous trials.

Judge Loper reprimanded Evans, who was expected to but did not attend the hearing, for taking no action over the preceding four months to further Flowers' case despite court orders to do so. District Attorney Evans, prosecutor in all six of Flowers's trials, recused himself from the case in January 2020 and asked the presiding judge to turn over prosecution to the Mississippi Attorney General's office. The state declined to prosecute Flowers for the seventh time, officially dropping all charges against Flowers on September 4, 2020. The Attorney General's office stated that it would be nearly impossible to convict Flowers due to the lack of any available living witnesses who had not recanted or otherwise rendered their testimony unusable by making multiple conflicting statements, the identification of alternative suspects, and new potentially-exculpatory evidence. The case was dismissed with prejudice, barring further prosecution and thus freeing Flowers and bringing the case to a formal conclusion.

In 2021, the state of Mississippi announced that it will pay Curtis Flowers $500,000 for his nearly 23 years of imprisonment.