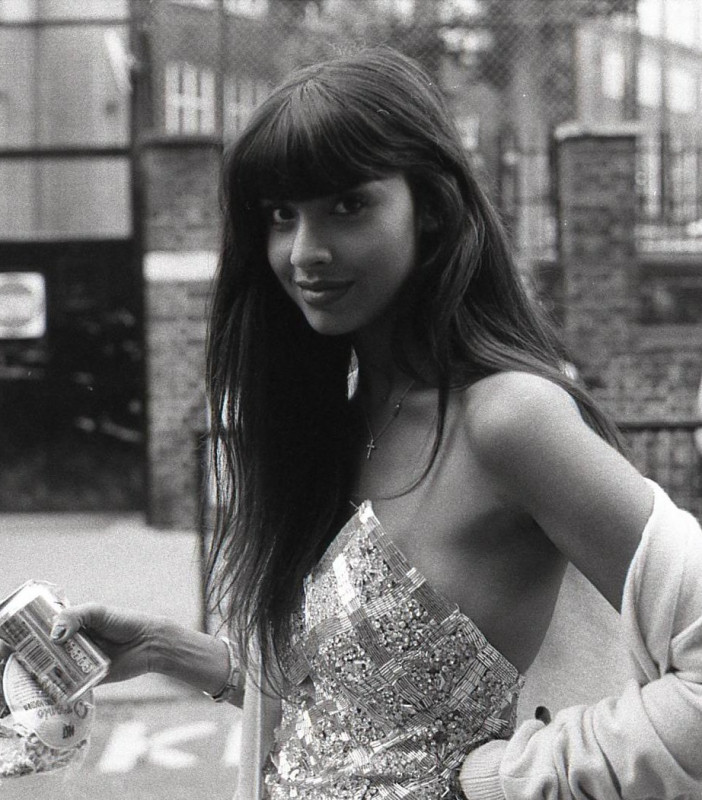 Jameela Alia Burton-Jamil (born 25 February 1986) is a British actress, radio presenter, model, writer and activist. She began her career on T4, where she hosted a pop culture series from 2009 until 2012. She then became the radio host of The Official Chart, and was co-host of The Official Chart Update alongside Scott Mills on BBC Radio 1. She was the first solo female presenter of the BBC Radio 1 chart show.

Jamil appeared on the E4 show Music Zone towards the end of 2008. She began presenting T4 in 2009. In January 2009, Alexa Chung left the morning TV show Freshly Squeezed; Jamil succeeded her as co-host, alongside Nick Grimshaw.

On the 1 October 2018 episode of Good Morning America – complete with video footage  – Jamil revealed that she lost a tooth, smashed her nose, broke her elbow and got a concussion when she slipped and fell on her face while running around the set with Olly Murs at a recorded event leading up to the pair acting as presenters at the Orange Rockcorps volunteer's London concert of September 2010.

From 2011 to 2014 she wrote a column for Company, the women's monthly magazine. In January 2012, Jamil replaced June Sarpong as the new host of the reality show Playing It Straight. In 2012, it was announced that Reggie Yates would leave BBC Radio 1 and Jamil would replace him. At the end of 2012 Jamil became the radio host of The Official Chart, and was co-host of The Official Chart Update alongside Scott Mills on BBC Radio 1. Jamil made radio history, becoming the first sole female presenter of the BBC Radio 1 Chart show. In June 2012, Jamil collaborated with Very to debut her first fashion collection.

Jamil was born in Hampstead, London, England, United Kingdom, to a Muslim Indian father and a Muslim Pakistani mother. She was born with congenital hearing loss and labyrinthitis, which she has had several operations to correct. She stated in 2015 that she had 70% audibility in her left ear and 50% in her right ear. Jamil says she was "bookish and shy" at school. At the age of nine, she was diagnosed with hypermobile Ehlers-Danlos syndrome, a genetic disorder affecting the connective tissue in the body. It can cause a very wide variety of symptoms, some of which can be life threatening. The most common symptoms include hypermobile joints, joint pain, stretchy skin, abnormal scar formation, extreme fatigue, digestive problems and heart issues. As a teenager, she suffered from anorexia nervosa and did not eat a full meal between the ages of 14 and 17. She has stated that she believes her eating disorder developed due to societal pressure:

Late in 2015, Jamil launched Why Not People?, an events and membership company dedicated to hosting live entertainment events accessible to people with disabilities. In March 2018, Jamil created an Instagram account called I Weigh, inspired by a picture that she came across online of Kourtney, Kim and Khloé Kardashian with their half-sisters Kendall and Kylie Jenner, detailing each woman's weight. Jamil describes I Weigh as "a movement... for us to feel valuable and see how amazing we are, and look past the flesh on our bones". The account welcomes submissions of followers' non-edited or airbrushed selfies using the hashtag #iweigh, with text describing the things that they feel grateful for or proud of. In part due to this work, Jamil was listed as one of BBC's 100 Women during 2018.

Following a breast cancer scare in 2016, Jamil moved to the United States. Whilst there, she was cast as Tahani Al-Jamil in the NBC fantasy comedy series The Good Place. She has modelled for both British and American Vogue, Glamour, Cosmopolitan, and Teen Vogue, and has written for The Times, Cosmopolitan, The Huffington Post, and Company.

The show premiered in September 2016, with Jamil being a regular cast member of the NBC fantasy comedy series The Good Place, where she played Tahani Al-Jamil. Jamil's character became known for her tendency to name drop.

Jamil made her first American magazine cover on the February 2018 edition of The Cut. She provided her voice as a guest on the animated television series DuckTales. In 2018, Jamil joined the cast of Disney's Indian-inspired cartoon set in fictional Jalpur. Mira, Royal Detective is expected to air on Disney Junior channels in 2020, with Jamil playing Mira's Auntie Pushpa. In 2018, Jamil hosted a recurring segment on Last Call with Carson Daly during its final season, entitled "Wide Awake with Jameela Jamil".

In May 2019, Jamil shared that she had an abortion earlier in her life. She stated, "It was the best decision I have ever made. Both for me, and for the baby I didn't want, and wasn't ready for, emotionally, psychologically and financially."

On 2 August 2019, Jamil was awarded "Advocate of the Year" from the Ehlers-Danlos Society.

Jamil was one of fifteen women selected to appear on the cover of the September 2019 issue of British Vogue "Forces for Change", by guest editor Meghan, Duchess of Sussex.

On 10 October 2019, as part of World Mental Health Day, Jamil revealed she survived a suicide attempt six years prior. She criticised the lack of services for those who struggled with mental health issues. She also revealed that she partook in EMDR therapy to treat her post traumatic stress disorder.

On 3 October 2019 in interview on Hard Talk a BBC News Channel programme she revealed that she had been raped several times in her life and in the past she looked at blaming women but has changed to blaming the societal patriarchy that produces that scenario.

In March 2020, she posed fully-clothed in suit and tie for Playboy magazine's "On Speech" issue. She later tweeted, "From my Playboy shoot, I wanted to be shot like a man. No retouching, hi res, loose, comfortable clothes and completely unsexualized. I felt extremely free."

Jamil received the "Phenom" award from the 12th annual Shorty Awards on 3 May 2020.