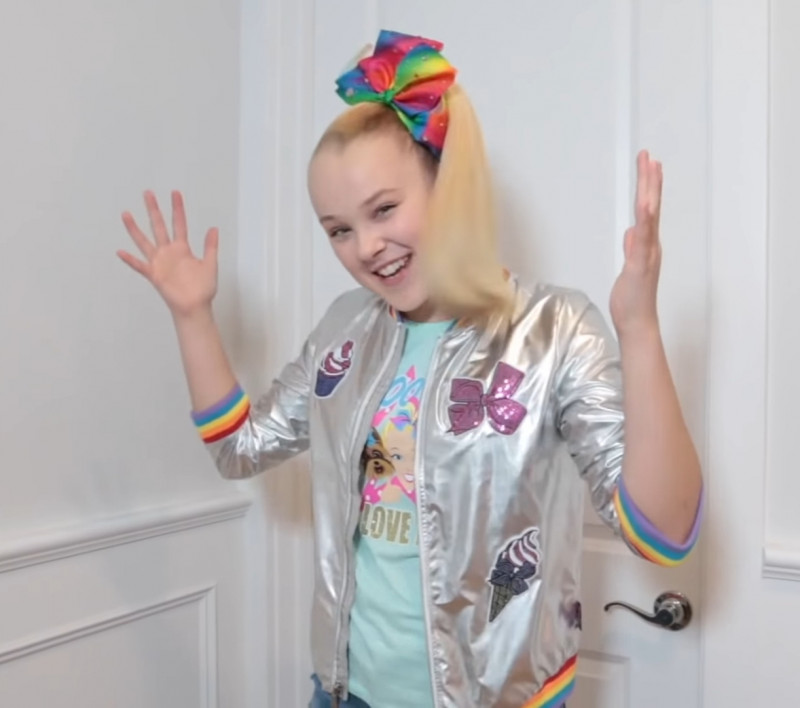 Joelle Joanie "JoJo" Siwa (born May 19, 2003) is an American dancer, singer, actress, and YouTube personality. She is known for appearing for two seasons on Dance Moms along with her mother, Jessalynn Siwa, and for her singles "Boomerang" and "Kid in a Candy Store". Siwa posts daily videos of her day-to-day life on her YouTube channel, "Its JoJo Siwa". She was included on Time's annual list of the 100 most influential people in the world in 2020.

Joelle Joanie Siwa was born in Omaha, Nebraska, on May 19, 2003, to Jessalynn Siwa (née Lombardi), a professional dance instructor from Iowa, and Tom Siwa, a chiropractor from Nebraska. She has one sibling, an older brother named Jayden Siwa, who is also a vlogger.

Siwa started her career as a top-5 finalist and the youngest contestant on the second season of Abby's Ultimate Dance Competition, produced by Abby Lee Miller of Dance Moms fame. She appeared on the show with her mother and was eliminated in week 9. Siwa soon began to appear on Dance Moms, beginning with auditioning for Miller's "ALDC" dance competition team in 2014 and being selected for the team in early 2015.

In 2016, Siwa released a line of hairbows in a collaboration with fashion accessory and jewelry company Claire's. The line of hairbows, which were inspired by the hairbows Siwa is known herself for wearing, experienced particular success among primary school pupils in the United Kingdom, where some schools took to banning them for a variety of reasons, including peer pressure, causing distraction from work, the impairment of pupils' concentration, and violation of school dress policies. Due to the bows' popularity, some stores also began selling similar bows. In 2017, Siwa commented that her bows were a "symbol of power, confidence, believing-ness."

In May 2016, Siwa released "Boomerang" for download and a previous single, "I Can Make U Dance." "Boomerang" addresses the subject of online bullying. Its video has been viewed more than 900 million times and received over 2.5 million likes. In 2018, Siwa was named the Breakout Artist of the Year by Vivid Seats.

Siwa signed with Nickelodeon in 2017, appearing in the film Blurt! with Jace Norman and the show Lip Sync Battle Shorties with Nick Cannon. Siwa later appeared in season 3 of The Masked Singer portraying T-Rex. At the age of 16, she is the youngest contestant to appear on the show.

In 2018, Siwa announced that she would be going on her first major concert tour in 2019, entitled D.R.E.A.M. The Tour. She was scheduled to visit a mixture of theaters, outdoor amphitheaters and stadiums, as well as indoor arenas in a total of 52 cities across the United States and Canada. Additionally, other performances would take place in the United Kingdom and Australia. The tour was scheduled to begin in Phoenix, Arizona on May 17. The first leg of the tour was scheduled to conclude on June 26 in Austin, Texas, before resuming for leg two on July 10 in Orlando, Florida. The final date of the second leg is scheduled to be on August 20 in Vancouver, Canada. She was included on Time's annual list of the 100 most influential people in the world in September 2020.

In June 2019, the FDA issued a warning about dangerous levels of asbestos in a JoJo Siwa-branded cosmetics kit, prompting Claire's to recall the product.

Siwa was in a relationship with TikTok star Mark Bontempo from August to November 2020. Siwa came out as being part of the LGBTQ+ community on social media in January 2021. After being asked what her label was by a fan, Siwa stated that she does not label her sexuality, as she "doesn't really know this answer". In February 2021, Siwa revealed that she was in a relationship with her best friend, who had asked her to be her girlfriend a month prior. She later stated "Technically I would say that I am pansexual, because that’s how I have always been my whole life is just like, my human is my human."

In January 2021, Spin Master created a card game called "JoJo’s Juice", which contained questions about nudity and theft, despite being marketed toward children ages 6 and older. Siwa later apologized and claimed she was not involved in the game's content development; the game was recalled from all toy store shelves.