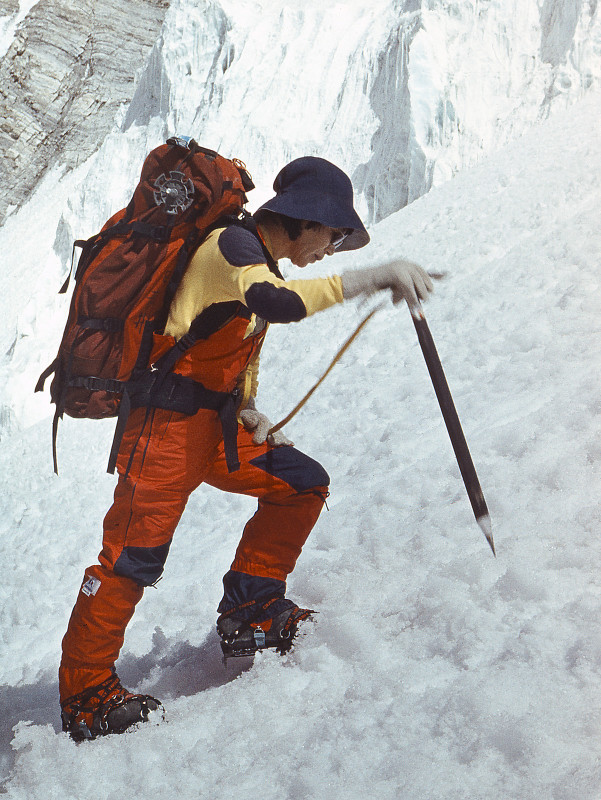 Junko Ishibashi was born on 22 September 1939 in Miharu, Fukushima, the fifth daughter out of seven children. Her father was a printer. She was considered a frail child, but nevertheless she began mountain climbing at the age of ten, going on a class climbing trip to Mount Nasu. She enjoyed the non-competitive nature of the sport and the striking natural landscapes that came into view upon reaching the top of the mountain. Although she was interested in doing more climbing, her family did not have enough money for such an expensive hobby, and Ishibashi made only a few climbs during her high school years.

Junko Tabei (田部井 淳子, Tabei Junko, born Junko Ishibashi; 22 September 1939 – 20 October 2016) was a Japanese mountaineer and author. She was the first woman to reach the summit of Mount Everest and the first woman to ascend the Seven Summits, climbing the highest peak on every continent.

After a long training period, the team made the expedition in May 1975. The group attracted much media attention with their plans, and the 15 women were initially accompanied by journalists and a television camera crew as they began their climb. They used the same route to ascend the mountain that Sir Edmund Hillary and Tenzing Norgay had taken in 1953, and six sherpa guides assisted the team for the full span of the expedition. On 4 May, the team was camping at 6,300 metres (20,700 ft) when an avalanche struck their camp. Tabei and four of her fellow climbers were buried under the snow. Tabei lost consciousness until sherpa guides dug her out. Luckily, there were no casualties. Bruised and injured by the incident, Tabei could barely walk and was forced to spend two days recovering. As soon as she was able, however, she resumed the expedition and continued leading her team up the mountain.

In 1969, Junko Tabei established the Joshi-Tohan Club (Women's Mountaineering Club) for women only. The club's slogan was "Let's go on an overseas expedition by ourselves", and the group was the first of its kind in Japan. Tabei later stated that she founded the club as a result of how she was treated by male mountaineers of the time; some men, for example, refused to climb with her, while others thought she was only interested in climbing as a way to find a husband. Tabei helped fund her climbing activities by working as an editor for the Journal of the Physical Society of Japan.

The Joshi-Tohan Club embarked on their first expedition in 1970, climbing the Nepalese mountain Annapurna III. They successfully reached the summit using a new route on the south side, achieving the first female and first Japanese ascent of the mountain. Tabei and one other member, Hiroko Hirakawa, were chosen to complete the final climb to the top, accompanied by two sherpa guides. The climbers had brought a camera, but the temperature was so cold that the camera's film cracked.

After Tabei and Hirakawa successfully summited Annapurna III on 19 May 1970, the Joshi-Tohan Club decided to tackle Mount Everest. The club created a team known as the Japanese Women's Everest Expedition (JWEE), led by Eiko Hisano, which would attempt to summit Mount Everest. JWEE contained 15 members, most of them working women who came from a range of professions. Two of the women, including Tabei, were mothers. They applied for a climbing permit for Everest in 1971, but had to wait four years to receive a place in the formal climbing schedule.

Although the team had originally planned to send two women up to the peak of Everest (accompanied by a sherpa), a bout of altitude sickness meant that the team's sherpas could not carry the number of oxygen bottles required to accommodate two climbers. Only one woman could continue. After much discussion, Hisano nominated Tabei to complete the climb. Nearing the peak, Tabei was furious to discover that she would have to cross a thin, hazardous ridge of ice that had gone completely unmentioned in accounts made by previous expeditions. She crawled along it sideways, later describing it as the most tense experience she had ever had. Twelve days after the avalanche, on 16 May 1975, with her sherpa guide Ang Tsering, Tabei became the first woman to reach the summit of Everest.

In addition to her climbing, Tabei worked on ecological concerns; in 2000, she completed postgraduate studies at Kyushu University focusing on the environmental degradation of Everest caused by the waste left behind by climbing groups. Tabei was also the director of the Himalayan Adventure Trust of Japan, an organization working at a global level to preserve mountain environments. One of the trust's projects was to build an incinerator to burn climbers' rubbish. She also led and participated in "clean-up" climbs in Japan and the Himalayas alongside her husband and children.

In May 2003, a celebration was held in Kathmandu to celebrate the 50th anniversary of the first successful summit of Mount Everest, and crowds of Nepalese people gathered to cheer a procession of past Everest climbers. Tabei and Sir Edmund Hillary were given a special place in the festivities for their respective achievements.

Between 1996 and 2008, Tabei wrote and published seven books. Following the Great East Japan Earthquake in 2011, Tabei began organizing annual guided excursions up Mount Fuji for schoolchildren affected by the disaster.

Tabei was diagnosed with stomach cancer in 2012, but continued with many of her mountaineering activities. In July 2016, despite her advancing illness, she led an expedition of youth up Mount Fuji. She died in a hospital in Kawagoe on 20 October 2016.

In 2019, a mountain range on Pluto was named Tabei Montes in her honour.

On 22 September 2019, Google commemorated the 80th anniversary of her birth with a Doodle. The accompanying write-up gave her motivation slogan, "Do not give up. Keep on your quest."

On 19 November 2019, a mountain range on Pluto was named Tabei Montes in honor of Tabei's mountaineering accomplishments. The theme for naming mountains on Pluto is "Historic pioneers who crossed new horizons in the exploration of the Earth, sea and sky".