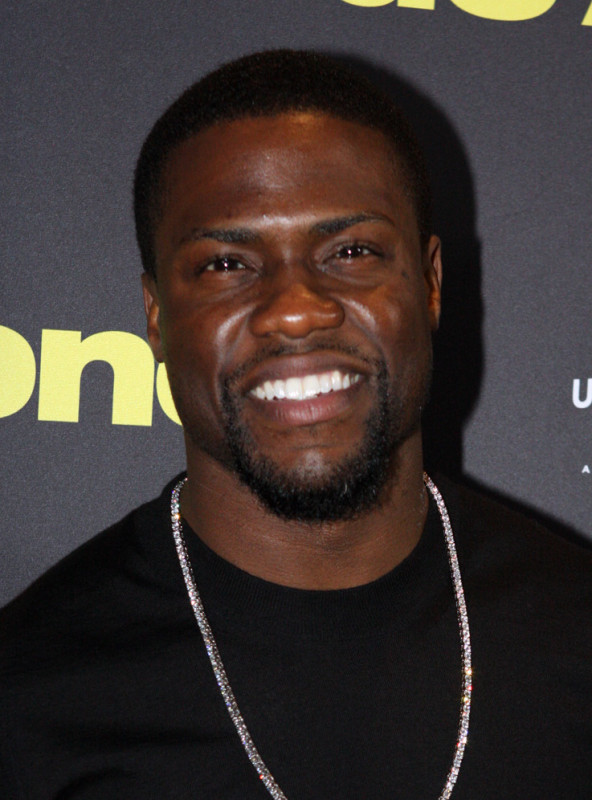 Kevin Darnell Hart was born in Philadelphia on July 6, 1979, the son of Nancy (died 2007) and Henry Hart. He has an older brother named Robert. He was raised in a single-parent household by his mother, who worked as a systems analyst for the Office of Student Registration and Financial Services at the University of Pennsylvania. His father was a cocaine addict who was in and out of jail throughout most of Hart's childhood, prompting Hart to use humor as a way to cope with his troubled family life. His relationship with his father improved after his father recovered from his addiction. He would also later talk about his mother in his stand-up routine, portraying her as a loving yet intimidating woman. After graduating from George Washington High School, Hart briefly attended the Community College of Philadelphia before dropping out and moving to New York City. He then moved to Brockton, Massachusetts, and found work as a shoe salesman.

Kevin Darnell Hart (born July 6, 1979) is an American comedian and actor. Originally known as a stand-up comedian, he has since starred in Hollywood films and on TV. He has also released several well-received comedy albums.

Hart married Torrei in 2003, and they filed for divorce in 2010 after citing irreconcilable differences. Hart requested joint custody of their two children, daughter Heaven Leigh (born March 22, 2005) and son Hendrix (born October 8, 2007). The divorce was finalized in November 2011.

Hart's comedy tours began in 2009 with his act titled I'm a Grown Little Man, followed by Seriously Funny in 2010, Laugh at My Pain in 2011, and Let Me Explain in 2013, the later two of which were also released as features in movie theaters. Hart grossed over $15 million from "Laugh at My Pain", making it one of the year's top-selling comedy tours. Hart also has a game available through iTunes called "Little Jumpman". His Facebook page, Twitter account, and YouTube channel are all connected to and accessible through this app. Most overseas fans of Hart discovered him on YouTube, as well.

In 2013, Hart co-created Real Husbands of Hollywood with Chris Spencer. The show follows Hart along with other married celebrities (each playing a comical fictionalized version of themselves) within the series including: Boris Kodjoe, Nelly, Duane Martin, J.B. Smoove, Nick Cannon, and Robin Thicke. Thicke didn't return for the second season due to his music career, though Hart has stated that the door is open for Thicke to return. The series is intentionally filmed in a style similar to Bravo's The Real Housewives. Episodes often hinge on the "real" Hart's desperately unsuccessful attempts to climb Hollywood's celebrity social ladder (which always backfire in humiliating ways), and the character's barely-hidden jealousy of his more successful celebrity friends. A sneak peek was shown as a segment during the 2012 BET Awards and the official promo was released in October 2012.

On April 14, 2013, Hart was charged on suspicion of drunk driving after his black Mercedes nearly collided with a tanker truck on a Southern California freeway. He failed a field sobriety test and was booked for misdemeanor DUI. On August 5, he was sentenced to three years of probation after pleading no contest to one count of driving under the influence of alcohol.

An avid poker player since around 2010, Hart has entered major tournaments such as the WSOP, cashing in one event for $4,783 in 2014. He also plays cash games, like the ones organized by PokerStars, and actually became their Brand Ambassador in 2017. As such, he was featured in PokerStars ad campaigns and promotional content, alongside Usain Bolt. As of September 2020, he has earned $47,828 in live tournament cashes.

In 2014, Hart starred as Ben in Ride Along, opposite Ice Cube. The film received generally negative reviews from critics, but was a major box office success. Hart returned in the sequel, Ride Along 2, which was released on January 15, 2016.

On August 18, 2014, Hart became engaged to Eniko Parrish. They were married near Santa Barbara, California, on August 13, 2016. Their son was born on November 21, 2017. A month later, he publicly admitted to having cheated on her while she was pregnant with their son. They reconciled and their second child together, a daughter, was born on September 29, 2020.

Hart's comedic reputation continued to grow with the release of his first stand-up album I'm a Grown Little Man (2009). He has since released four more comedy albums: Seriously Funny (2010), Laugh at My Pain (2011), Let Me Explain (2013), and What Now? (2016). In 2015, Time Magazine named him on its annual list of the 100 most influential people in the world. In 2017, he launched the Laugh Out Loud Network, a subscription video streaming service in partnership with Lionsgate.

In addition to acting, Hart has also hosted various ceremonies. Hart first hosted the 2011 BET Awards. Hart then hosted the 2012 MTV Video Music Awards. His longtime friend Judd Apatow, the director who gave him his first big on-screen break in the TV series Undeclared, was the one who recommended him for the gig. Hart hoped that this will project him further into a side career as an emcee, stating, "Hopefully after MTV, of course we're talking Emmys, Oscars, whatever." He has hosted three episodes of Saturday Night Live. In 2015, Hart hosted the Comedy Central Roast of Justin Bieber. In 2016, Hart co-hosted the 2016 MTV Movie Awards with Dwayne Johnson.

On April 9, 2015, Hart embarked on a comedy world tour titled the What Now? Tour at the AT&T Center in San Antonio, which concluded on August 7, 2016, at the Columbus Civic Center in Columbus, Georgia. On July 16, 2015, Universal Pictures announced that Kevin Hart: What Now?, a stand-up comedy film featuring a performance of Hart's What Now? Tour, would be theatrically released in the United States on October 14, 2016. The show was filmed live on August 30, 2015, in front of 53,000 people, at Philadelphia's Lincoln Financial Field.

As of October 2016, Hart was set to portray Santa Claus in Dashing Through the Snow, a planned 2017 Disney Christmas-themed film. In October 2018, it was reported that Chris Rock will direct Hart in a movie based on an original idea by the both of them. The film will be written by Black-ish writer Yamara Taylor and the film will revolve around a stay at home dad who raises the kids while his star CEO wife serves as the breadwinner. The man finds himself in emotional and public turmoil when his wife kicks him to the curb, and they engage in a bitter divorce and custody battle. In 2019, Hart signed on to star in and produce Monopoly, Black Friday, an untitled international romantic comedy, Extreme Job, and Scrooged. He signed a first look deal with Netflix in January 2021. Hart will star as a master thief in the Netflix comedy heist film Lift directed by F. Gary Gray alongside Úrsula Corberó from Money Heist and Vincent d'Onofrio.

In 2017, Hart and Tommy John appeared in an underwear commercial for Macy's.

In 2017, Hart founded Laugh Out Loud, a global media and production company to provide opportunities for top comedic talent of all ethnicities worldwide.   Originally partnered with Lionsgate, Hart became majority owner in 2019 after buying out most of the Liongate’s stake. LOL spans the full range of media channels, including digital, audio, linear and experiential, with four divisions: LOL Network, LOL Studios, LOL Audio and LOL X!

In 2018, he produced his first film under his production company HartBeat Productions, Night School. In October 2018, it was announced that through his production company, he has signed a first-look deal with Nickelodeon. Under the deal, Hart and his HartBeat Productions banner will develop and produce live-action, scripted kids content for the network. Hart also has a first-look film deal with Universal Studios.

On December 4, 2018, Hart was announced as the host of the 2019 Academy Awards. Two days later, however, he withdrew from hosting duties in the wake of backlash against him over several homophobic tweets he had posted between 2010 and 2011. He characterized the protest as non-constructive and argued, "If you don't believe people change, grow as they get older, I don't know what to tell you". On December 7, he tweeted an apology to the LGBTQ community following criticism for not issuing one the previous day. On January 3, 2019, Hart stated that he was going to reconsider stepping down as host, after openly lesbian comedian Ellen DeGeneres, who has hosted the Academy Awards multiple times, expressed support for him to do so and said she had contacted the Academy to ask if Hart would be able to reverse his decision if he wished and, according to DeGeneres, they said he would be able to do so. On January 8, following backlash for what was perceived as an insincere apology by critics, Hart confirmed that he would not be hosting the Academy Awards. That year's ceremony was ultimately held without a host.

In 2019, Hart's film The Upside, his first headlining role in a drama, was theatrically released. It also starred Bryan Cranston and Nicole Kidman. Hart also reprised his role of Snowball in the sequel The Secret Life of Pets 2.

On September 1, 2019, Hart was a passenger in a 1970 Plymouth Barracuda that went off Mulholland Highway and rolled down an embankment near Calabasas, California. He and the driver reportedly suffered "major back injuries" and were taken to separate hospitals. Hart was released from the hospital ten days later, and continued recovery at a rehabilitation facility.

Hart has aggressively expanded LOL's reach since its founding, securing partnership deals with PlutoTV, Roku, Snap, Facebook, Peacock, and YouTube. In 2020, he extended his company's agreement with Sirius XM.  The network has launched successful programming, including Cold As Balls which has amassed over one billion YouTube views, Kevin Hart: Lyft Legend, What the Fit, and Straight From The Hart. LOL has won numerous accolades, including nominations and awards from the Producers Guild of America, Critics' Choice Movie Awards, Realscreen, Streamy, and Webby.

In 2020, his series Die Hart premiered on Quibi on July 20 and had a great first weekend, with numerous households streaming the series. On June 9, ROKU and Hart's multi-platform comedy brand Laugh Out Loud the series' return to Roku with a second season.

On September 9, 2020, executives from the Muscular Dystrophy Association announced plans to relaunch their annual MDA telethon, move it to October 2020, and make Hart its new host, taking over duties that had been previously held from 1966 to 2010 by comedian and former National MDA Chairman, Jerry Lewis. Entitled The MDA Kevin Hart Kids Telethon, the new two-hour telethon will be seen exclusively through participating social media platforms; the event was held on October 24, 2020, at 8 p.m. EDT.

In 2021, Hart starred in Fatherhood, a drama about a man whose wife dies shortly after childbirth, leaving him to raise their daughter on his own. It premiered on Netflix on June 18, 2021.