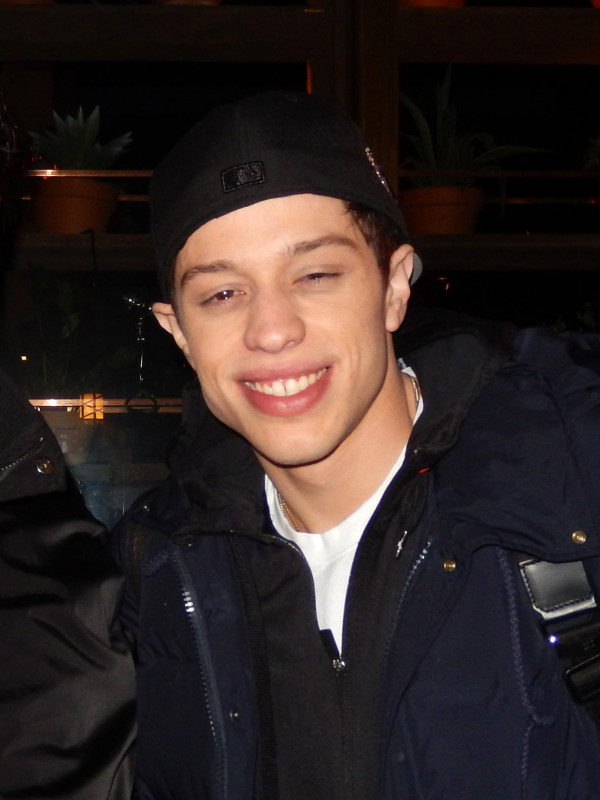 Peter Michael Davidson was born on November 16, 1993, in the Staten Island borough of New York City, to Amy (née Waters) and Scott Matthew Davidson. His father was a New York City firefighter who died in service during the September 11, 2001 attacks. He was last seen running up the stairs of the Marriott World Trade Center, just before it collapsed. His Requiem Mass was held at St. Clare's Roman Catholic Church in Great Kills, Staten Island.

Peter Michael Davidson (born November 16, 1993) is an American comedian and actor. He has been a cast member on the NBC late-night sketch comedy Saturday Night Live since 2014. Davidson has also appeared on the MTV shows Guy Code, Wild 'n Out, and Failosophy. He has performed stand-up comedy on Adam DeVine's House Party, Jimmy Kimmel Live!, and Comedy Underground with Dave Attell, and guest-starred in Brooklyn Nine-Nine. In 2020, he co-wrote and starred in the semi-autobiographical comedy-drama film The King of Staten Island.

Davidson was diagnosed with Crohn's disease at age 17 or 18, for which he receives intravenous treatment, and uses medical marijuana for pain management and recreationally. On March 6, 2017, Davidson announced on his Instagram account that he had quit drugs and was sober for the first time in eight years. During an interview on comedian Marc Maron's podcast, Davidson clarified that the only drug he used was marijuana and, while he has since cut back on its use considerably, the personal and emotional problems he initially assumed were the result of his daily marijuana use were actually caused by his newly diagnosed borderline personality disorder, for which he has since been undergoing treatment.

Davidson attended St. Joseph by-the-Sea High School, then Tottenville High School before transferring to Brooklyn's Xaverian High School, where he graduated in 2011. After high school, he enrolled at St. Francis College in Brooklyn Heights. After one semester, Davidson decided to pursue a career in comedy full-time.

Davidson's earliest onscreen appearance was in the third episode of the MTV comedy series Failosophy, which premiered February 28, 2013. The following month, he appeared in "PDA and Moms," a third-season episode of the MTV2 reality TV comedy series Guy Code, the first of four episodes in which he was featured. That June, his first televised standup aired as part of a second-season episode of the Comedy Central program Gotham Comedy Live, which showcases standup comedians at the Gotham Comedy Club in New York City. The following month, he returned to MTV2 with an appearance on Nick Cannon Presents: Wild 'N Out, his first of six appearances on that show.

Davidson joined the cast of Saturday Night Live with the show's 40th-season premiere, which debuted on September 27, 2014. At age 20, he was the first SNL cast member to be born in the 1990s and one of the youngest cast members ever. The first new addition to the cast that season, Davidson was given a chance to audition for the show through regular Bill Hader, whom he had met while filming a small part in the 2015 Judd Apatow feature film comedy Trainwreck. Hader subsequently told producer Lorne Michaels about him. His debut garnered positive critical notice, with his most noted skits during the season including an Indiana Jones-style sketch in which he and Dwayne "The Rock" Johnson, after being pelted with poison darts, were forced to mutually suck poison out of each other's various body parts, an endeavor that eventually found them entangled in the "69" position. Another involved Davidson being shot in the chest with an arrow by Norman Reedus.

Davidson subsequently made standup appearances on television and appeared in Brooklyn Nine-Nine. In 2014, he acquired a role in a Fox comedy pilot, Sober Companion, but it ultimately did not make it to series.

In March 2015, Davidson was a roaster on the Comedy Central Roast of Justin Bieber, and his set was praised as one of the best of the show. Among his bolder jokes was one at the expense of fellow roaster Snoop Dogg, host Kevin Hart, and their 2004 film Soul Plane. Davidson, whose firefighter father died responding to the September 11 attacks, called that film "the worst experience of my life involving a plane."

In October 2015, Davidson lived in Brooklyn Heights, New York. In 2019, he lived in Staten Island, New York, with his mother in a home they purchased together. In April 2021, he moved into his own residence in Staten Island. His father, Scott Matthew Davidson, was a firefighter and first-responder who died as a result of the September 11 attacks. Davidson has his father's badge number, 8418, tattooed on his left arm. Davidson is godfather of Leo, the son of fellow comedian and friend, Ricky Velez.

In 2016, Davidson was on the Forbes 30 under 30 list. In April of that year, Comedy Central filmed Davidson's first stand-up special Pete Davidson: SMD, in New York City.

Davidson, then aged seven, was profoundly affected by the loss. He told The New York Times that it was "overwhelming" and that he later acted out in school as a result of the trauma. At one point, he ripped his hair out until he was bald. In October 2016, Davidson revealed on The Breakfast Club morning radio show that he struggled with suicidal thoughts when he was younger and that the music of Kid Cudi saved his life.

Davidson supported Hillary Clinton in the 2016 U.S. presidential election, and on December 5, 2017, he stated on his Instagram account that he got a tattoo on his leg of Clinton, whom he called his "hero", a "badass", and "one of the strongest people in the universe." Clinton herself thanked Davidson for the compliment, joking, "This makes it significantly less awkward that I've had a Pete Davidson tattoo for years." He supported Joe Biden in the 2020 U.S. presidential election.

In May 2018, he started dating singer Ariana Grande. In June 2018, Davidson confirmed he was engaged to Grande, but the engagement was called off in October 2018 due to the death of Mac Miller, Grande's ex-boyfriend. Grande's song about Davidson, titled "Pete Davidson", appears on her 2018 album Sweetener. She also referenced him in her song, "Thank U, Next", with the lyric, "Even almost got married / And for Pete I'm so thankful".

By August 2018, Davidson had over 40 tattoos on his arms, legs, chest, hands, and neck but during a May 2021 interview, he indicated that he was having some of them removed.

The Roman Catholic Diocese of Brooklyn demanded an apology from Davidson in March 2019, after an SNL sketch where he compared the Catholic Church to R. Kelly, an entertainer who had been accused of pedophilia. In the sketch, Davidson said "(Kelly) is a monster and he should go to jail forever. But if you support the Catholic Church, isn't that like the same thing as being an R. Kelly fan? I don't really see the difference, except for one's music is significantly better." In a statement posted on its website, the diocese criticized the "disgraceful and offensive skit", further opining, "The faithful of our Church are disgusted by the harassment by those in news and entertainment, and this sketch offends millions. The mockery of this difficult time in the Church's history serves no purpose." Davidson's comments came after the Diocese of Brooklyn and Queens agreed to a record $27.5 million settlement for sex abuse allegations in September 2018.

On Saturday, December 15, 2018, Davidson shared a candid Instagram post in which he expressed thoughts of suicide, before deleting his account on the social media platform entirely. The New York Police Department conducted a wellness check on Davidson in response to social media posts from followers and former fiancée Ariana Grande. Davidson had been at the Saturday Night Live studio at the time preparing for the last episode before the show's annual hiatus airing later that night. Davidson and John Mulaney, comedian and former SNL writer, made humorous references to the Instagram post during the Weekend Update segment of the first episode following the holiday hiatus on January 19, 2019.

Davidson collaborated with Machine Gun Kelly to write the sketch "A Message from the Count" for Kelly's album Hotel Diablo. In 2019 he starred in Jason Orley's Big Time Adolescence, and had supporting roles in Adam Shankman's What Men Want, Jeff Tremaine's The Dirt, Thurop Van Orman's The Angry Birds Movie 2, and John Turturro's The Big Lebowski spin-off The Jesus Rolls. In February 2020, Davidson released his stand up special Alive from New York on Netflix. In May 2020, The King of Staten Island was released, which Davidson both starred in and co-wrote with Judd Apatow, who also directed. Davidson was nominated for The Comedy Movie Star of 2020 for his work in The King of Staten Island and The Comedy Act of 2020 Pete Davidson: Alive from New York at the 46th People's Choice Awards. In April 2021, Davidson was cast as Joey Ramone in a Netflix biopic I Slept With Joey Ramone, based on the late singer's memoir of the same name. Davidson will also serve as co-writer and executive producer. In August 2021, he was seen in The Suicide Squad directed by James Gunn.

In January 2019, it was announced that Davidson would be touring with John Mulaney in New York, New Jersey, Pennsylvania, and Massachusetts for a limited series of comedy shows titled "Sundays with Pete & John." Mulaney and Davidson have become close appearing together on The Tonight Show Starring Jimmy Fallon and Saturday Night Live. That May, after the 44th-season finale of SNL, Travis M. Andrews of The Washington Post credited Davidson with being the most memorable performer that season and its breakout star, which Andrews attributed to Davidson's mining of his personal struggles and his admission of his comedic missteps, which Andrews felt gave the season a mixture of comedy and pathos.

In early 2019, Davidson was in a relationship with actress Kate Beckinsale, a woman twenty years his senior. In response to media comments about the age difference, he said that such an age gap was new to him and that the media should ask older men in longer relationships with younger women such as Leonardo DiCaprio, Alec Baldwin, Larry King, and Donald Trump about it. He also dated actress Margaret Qualley until their relationship ended in October 2019. He was involved with model Kaia Gerber from October 2019 to January 2020.

In March 2021, a woman falsely claimed to be married to Davidson and falsely misrepresented an association with her business. The woman was reported to have illegally entered his home and subsequently faced legal charges.

In August 2021, he split from Bridgerton actress Phoebe Dynevor after a five month relationship.

Since November 2021, Davidson and Kim Kardashian have openly been dating. The pair was seen several times in public, which included celebrating New Year's Day 2022 together in the Bahamas. Kardashian's former husband Kanye West referenced the relationship in his 2022 track "Eazy", in which he threatens to "beat Pete Davidson's ass".