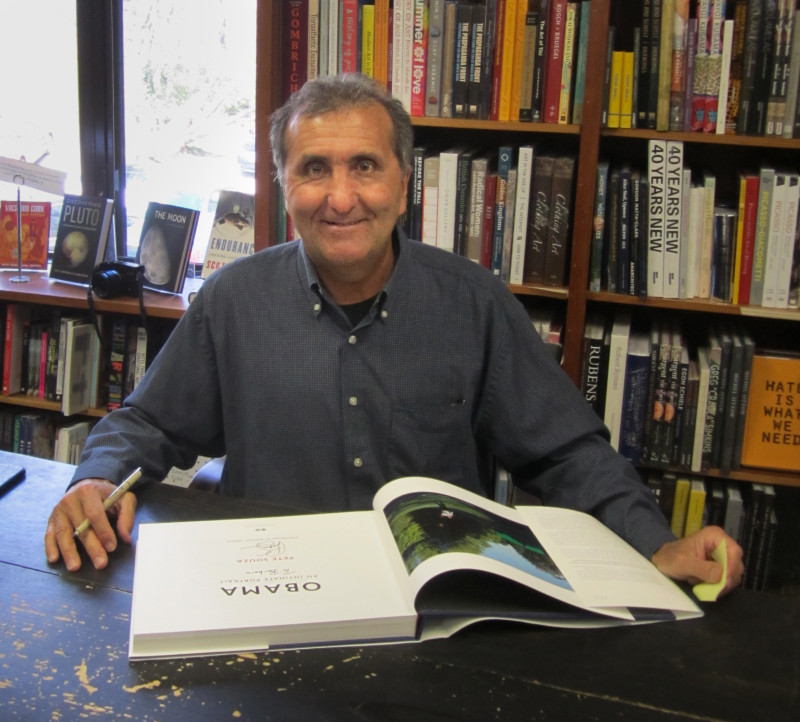 Peter Joseph Souza (born December 31, 1954) is an American photojournalist, the former Chief Official White House Photographer for Presidents of the United States Ronald Reagan and Barack Obama and the former director of the White House Photography Office. He was a photographer with The Chicago Tribune, stationed at the Washington, D.C., bureau from 1998 to 2007; during this period he also followed the rise of then-Senator Obama to the presidency.

At the end of the Reagan administration, Souza continued to be based in Washington, D.C. Between 1998 and 2007, he was a photographer for the Chicago Tribune Washington, D.C., bureau. Souza has also worked as a freelancer for National Geographic and Life magazines. After the September 11, 2001, terrorist attacks, he was among the first journalists to cover the war in Afghanistan and the fall of Kabul.

Souza covered Obama's arrival to the Senate in 2005 and met him for the first time on Obama's first day in the Senate. He documented Obama's time in the Senate, following him in many foreign trips, including those to Kenya, South Africa, and Russia. In the process he not only became close to Senator Obama, he ended up following his rise to the presidency. In July 2008, Souza published a bestseller photo-book The Rise of Barack Obama, featuring photographs between 2005 and 2008.

Souza was an assistant professor of photojournalism at Ohio University's School of Visual Communication After the November 2008 election, he was asked to become the official White House photographer for his second time for the new President-elect Obama. On January 14, 2009, the new presidential portrait was released; it is the first time that an official presidential portrait was taken with a digital camera. A week later Souza was present at the inauguration and the following day he was the only photographer present for Obama's second swearing-in on Obama's first workday in the Oval Office.

In May 2009, Souza began using Flickr as an official conduit for releasing White House photos. The photos were initially posted with a Creative Commons Attribution license which required that the original photographers be credited. Flickr later created a new license which identified them as "United States Government Work" which does not carry any copyright restrictions.

In 2010, National Geographic produced a program about Souza titled The President's Photographer, which featured Souza as the main subject while also covering the previous White House photographers.

Souza's photograph taken at 4:05 pm on May 1, 2011, in the Situation Room during the raid on Osama bin Laden, featuring Obama, Vice President Joe Biden, Secretary of State Hillary Clinton, and others, quickly became an iconic image. It also became one of the most viewed images on Flickr. Souza's 2009 image of a five-year-old child, Jacob Philadelphia, touching Obama's head has also become iconic. Jacob asked if Obama's hair was similar to his and the image has become symbolic of the African American struggle for civil rights.

In November 2011, Souza was included on The New Republic's list of Washington's most-powerful, least-famous people.

In 2017, Souza received a book deal from Little, Brown and Company to publish a book of photos from his tenure as White House photographer titled Obama: An Intimate Portrait: The Historic Presidency in Photographs.

Upon Donald Trump's inauguration as president in 2017, Souza began sharing pictures of Obama on his Instagram account, often as critical commentary on the new administration. In April 2017, he had over one million Instagram followers, and reached two million followers in August 2018 as he continued to critique the Trump presidency through contrasting photographs of Obama. In 2018, he announced the release of a new book titled Shade: A Tale of Two Presidents, juxtaposing the Obama and Trump administrations.

In January 2021, Souza gave advice to Adam Schultz, the incoming Chief Official White House Photographer for President Joe Biden. He also noted that the photographer for outgoing President Trump, Shealah Craighead, had posted "very few behind the scenes pictures" to Flickr during her tenure.

In late 2019, Pete Souza and his family moved to Madison, Wisconsin.