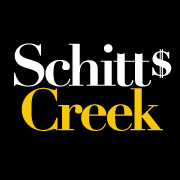 The members of the wealthy Rose family—video store magnate Johnny (Eugene Levy), his wife and former soap opera actress Moira (Catherine O'Hara), and their spoiled adult children David and Alexis (Dan Levy and Annie Murphy)—lose their fortune after being defrauded by their business manager. They are forced to rebuild their lives with their sole remaining asset: a small town named Schitt's Creek, which Johnny bought for David as a joke birthday gift in 1991. The Roses relocate to Schitt's Creek, moving into two adjacent rooms in a run-down motel. As the family adjusts to their new lives, their well-to-do attitudes come into conflict with the more provincial residents of Schitt's Creek, including mayor Roland Schitt (Chris Elliott), his wife Jocelyn (Jenn Robertson), the motel's manager Stevie Budd (Emily Hampshire), town council elects Ronnie (Karen Robinson) and Bob (John Hemphill), and Jazzagal member and Café Tropical waitress Twyla (Sarah Levy).

Schitt's Creek is filmed using a single camera set-up with no live audience or laugh track. The interior scenes for the first two seasons were filmed at Pinewood Toronto Studios in Port Lands area of Toronto, while interior scenes for season 3 were shot at Dufferin Gate Studios in (Etobicoke) Toronto. Interior scenes were also filmed at Revival Studios in (Leslieville) Toronto for an unknown number of seasons. The remainder of the series is filmed on location in Goodwood, the Regional Municipality of Durham in the Greater Toronto Area, Brantford and Mono, where the motel scenes are filmed. Goodwood was one of 30 towns scouted for the fictional location of Schitt's Creek before production of the series began in 2014. The Canadian Press wrote 27 June 2019 that Goodwood had become a "tourist hot spot" as filming for the current season concluded.

In 2015, Schitt's Creek's first season received two Directors Guild of Canada awards from three nominations. At the 2016 ceremony, season 1 received nine Canadian Screen Awards from 16 nominations. Schitt's Creek's second season received 13 nominations at the 5th Canadian Screen Awards. In 2018, the series received nominations from the US-based MTV Movie & TV Awards and the Critics' Choice Television Award. In 2019, the series was nominated for 15 Canadian Screen Awards and four Primetime Emmy Awards, winning the award for Best Performance by an Actress in a Continuing Leading Comedic Role (Catherine O'Hara) and Best Comedy Program or Series at the Canadian Screen Awards. The same year, the series won Dorian Awards for TV Comedy of the Year and Unsung TV Show of the Year from the Society of LGBTQ Entertainment Critics. In 2020, the sixth and final season was nominated for 15 Primetime Emmy Awards. This broke the record for the most Emmy nominations given to a comedy series in its final season. During the 2020 Emmys, the show became the first ever comedy or drama series to sweep the four acting categories (Outstanding Lead Actor, Outstanding Lead Actress, Outstanding Supporting Actor, Outstanding Supporting Actress) and one of only four live action shows, along with All in the Family, The Golden Girls, and Will & Grace where all the principal actors have won at least one Emmy Award.

Schitt's Creek was part of a "new direction" in programming taken by both CBC and Pop TV during the 2014-15 television season. Premiering alongside 12 new primetime shows on CBC, the series represented one of the network's efforts to produce more "serialized, scripted" content, as well as more "cable-like" shows. The series was also the first original, scripted program to air on Pop TV after its re-branding in January 2015. Formerly known as TV Guide Network, Pop TV was re-branded as a channel "filled with optimism, passion, funny and excitement".

Schitt's Creek (stylized as Schitt Creek) is a Canadian television sitcom created by Dan Levy and his father Eugene Levy that aired on CBC Television from January 13, 2015, to April 7, 2020. It consists of 80 episodes spread over six seasons. Produced by Not a Real Company Productions and Anonymous Content, the series follows the formerly wealthy Rose family's trials and tribulations. After Rose's business manager embezzles the family business, Rose Video, the family loses its fortune and relocates to Schitt's Creek, a small town they once purchased as a joke. Now living in a motel, Johnny Rose (Eugene Levy) and Moira Rose (Catherine O'Hara)—along with their adult children, David (Dan Levy) and Alexis (Annie Murphy)—must adjust to life without money and with each other.

Schitt's Creek has been co-broadcast in Canada and the United States since 2015. The show initially premiered on the CBC in Canada on Tuesday, January 13, 2015 at 9:00 pm/9:30 pm NT with back-to-back episodes. It made its debut in the United States on Pop TV on Wednesday, February 11, 2015 at 10:00 pm ET/PT. Pop moved the series to an 8:00 pm ET/PT time slot with an encore broadcast at 11:00 pm ET/PT for seasons two through four; it returned to its original 10:00 pm ET/PT time slot for season five. The series maintained staggered premieres throughout its first five seasons, with new episodes debuting in Canada before being broadcast in the United States. This changed in the final season, with new episodes being broadcast simultaneously in Canada and the United States. The series finale aired on April 7, 2020 at 8:00 pm ET; it was followed by a one-hour behind-the-scenes retrospective documentary titled Best Wishes, Warmest Regards: A Schitt's Creek Farewell. In the United States, the series finale was Schitt's Creek's highest-rated episode ever and simulcast on Logo TV and Comedy Central, which had recently become sibling networks to Pop TV through the ViacomCBS merger.

The series conception came from Dan Levy, who wondered how wealthy families, as frequently depicted on American reality television, would react if they were to lose all their money. He further developed the series with his father, Eugene, before pitching the series to several Canadian and American networks. The series was first sold to CBC Television in Canada and secured final funding to start production in its sale to Pop TV in the United States, where it debuted on February 11, 2015. Although limited in popularity throughout its first few seasons, the series' appearance on Netflix after its third season is credited for the show's sudden rise in stature, attributed to the "Netflix bump" and a dynamic social media presence.

Subsequent seasons of Schitt's Creek were more positively received, with the show growing in popularity after debuting on Netflix in January 2017. On Rotten Tomatoes, seasons 2, 4, 5 and 6 have approval ratings of 100%, with season 4's consensus reading, "The comedic real estate value rises for Schitt's Creek in its fourth year, the series gradually maturing into appointment viewing with a big, beating heart beneath its absurdity." The final season's consensus reads: "Witty, warm, and with just the right blend of wisdom and wisecracks, Schitt's Creek's final season is the perfect farewell to the Roses and the town that changed their lives." Bridget Read of Vogue wrote that while the series "started off with typical fish out of water scenarios," it has "fully come into its own, with a whole cast of Twin Peaks-meets-Christopher-Guest-universe characters that are as equally endearing". In New York Magazine, Maggie Fremont wrote that "the show takes a few episodes to get into its groove, but once it does, you'll never want to leave". The series has placed on annual best-of lists published by A.V. Club, Esquire, Glamour, The Guardian, The New Yorker, and Variety. In 2019, the series was named "The Best Show on TV Right Now" by TV Guide.

In 2018, Debmar-Mercury, a division of Lionsgate, acquired the U.S. syndication rights to Schitt's Creek. The series is scheduled to debut in syndication with the Fox Television Stations serving as the flagship group throughout the U.S. during the fall 2020 television season. The series also began airing reruns of series on Comedy Central on October 2, 2020.

Dan Levy came up with the idea for the show while watching reality television. He told Out.com, "I had been watching some reality TV at the time and was concentrating on what would happen if one of these wealthy families would lose everything. Would the Kardashians still be the Kardashians without their money?" He turned to his father, Eugene Levy, to help develop the show; Eugene Levy came up with the series title. Dan Levy decided to make the location of Schitt's Creek vague, but in August 2018 said that it is in Canada.

During the show's later seasons, the main cast participated in a series of interactive fan events. A live audience promotional tour known as Schitt's Creek: Up Close & Personal featuring cast members Eugene Levy, Catherine O'Hara, Dan Levy, Annie Murphy, Emily Hampshire, and Noah Reid premiered in September 2018 in Los Angeles. The event included behind-the-scenes stories; a live question and answer session with the cast; and an audience participation trivia game. Following the initial event's success, the tour was expanded to include stops in several additional U.S. and Canadian cities in 2019. Daniel Levy stated that the tour was meant to both promote the show and thank fans for their support.

In December 2019, fans on social media accused UK television station 4Music of censoring some scenes featuring "intimate dialogue" and kissing between the show's LGBTQ characters. Co-creator and star, Dan Levy, also addressed the alleged censorship on social media calling it "highly disturbing" and "dangerous". 4Music responded to the allegations of censored kissing with an apology, stating that the removal of a kiss between two male characters was "human error" and would be restored for future broadcasts. The station did not specifically respond to the allegations of censored dialogue between LGBTQ characters.

To promote the series' sixth and final season in January 2020, CBC and Pop TV commissioned "groundbreaking" billboards featuring a same-sex kiss between the show's engaged couple, David and Patrick. Series creator Daniel Levy said it felt "irresponsible" not to put the characters kissing on a billboard, as it isn't "something we see every day" and is "banned in multiple countries."

Toronto Mayor John Tory announced that on Monday, September 21, 2020 the CN Tower would be lit up in gold to celebrate the Schitt's Creek record breaking sweep of every award in the 2020 Emmy Awards comedy category.

Additional accusations of censorship were made in October 2020 when co-creator and star, Dan Levy, called out Comedy Central India for editing a same-sex kiss between two male characters in a promotional clip posted to Comedy Central India's Twitter account. Levy noted via social media that Schitt's Creek is "a show about the power of inclusivity" and censoring gay intimacy was a "harmful statement against that message".

The former Hockley Motel in Mono, where the exterior shots of the Rosebud Motel were filmed, was marketed for sale by its owners in November 2020.